Dr. O’Connor: ‘I will continue to advocate for Fort Chip’ 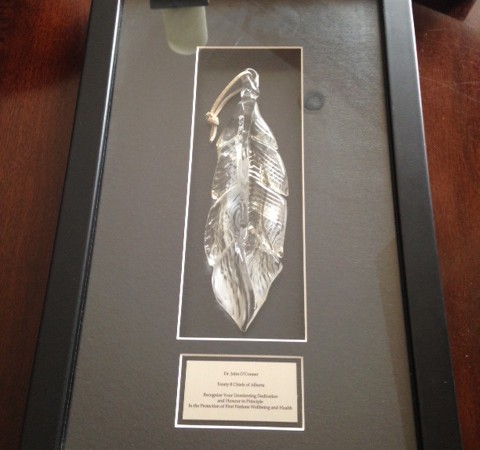 Editor, I'm still shattered and extremely disappointed in the Nunee Health Board Society (NHBS) and Steve Courtoreille, the Mikisew Cree First Nation Chief. I received an email, with neither notice nor explanation, immediately ending my years of physician service to Fort Chipewyan, at 3 p.m. on May 8 2015, signed by Roxanne Marcel, on behalf of the NHBS. Despite my efforts to seek an explanation as to why, I’ve heard not a word.

My connection with Chip began in 2000. I provided in-community service until 2007. At that point, after Chip health issues had hit the media, my wife and I headed east, for sanity’s sake. I’d recruited a physician, Dr. Liam Griffin, to take over in the community. The NHBS asked me to be on call, as physician back-up, on the days and nights when Dr. Griffin was not in Fort Chip. They offered me a contract, to which I agreed. It stipulated that my services were for on-call and did not require me to provide in-community clinics, as they were not required with Dr. Griffin in place.

This contract was entirely proposed and worded by the NHBS. I was fully compliant with the terms of this contract. Over the years, I was asked to re-sign this contract, which I did. There was never any issue with it. And I was busy – fielding calls at any and all hours of the day and night, handling very serious emergencies, arranging admissions to hospital, medevacs out to Fort McMurray and beyond, even when I was overseas in Ireland visiting my mother, and on family vacations, many, many times. Christmas, graduations, even in the shower – with one dry hand, I’d reach for my phone – I was never unavailable. The community knows my cell phone number, and I still am called. I love Fort Chip. My wife Charlene, and our children, grew to accept my constantly being interrupted and on calls.

I was asked a few months back to provide “Well Man Medicals” in Fort Chip by Caroline Adam, the current Health Director. I explained that I did not have the time. It was not a big issue then. Dr. Tailfeathers and the current Nurse Practitioner provide these anyway – I am reassured that there is no gap in providing this service.

Steve Courtoreille offered this as a reason for my abrupt termination. He also stated that I’d not been in Fort Chip in seven years – I’ve been there several times actually – and could not be an advocate for Chip if I’d not been there. Did I totally waste the past seven years?

I have been the ONLY physician advocating for Chip. I laid my licence on the line and fought for almost three years to retain it, all on account of Fort Chip. Steve and I have stood together on many a platform, side by side, in the last seven and more years, advocating for his community. Steve was involved with me being presented by the Treaty 8 Chief with a glass-framed eagle feather in High Level a few years ago, which I proudly display in my home. I’ve travelled far and wide, with the blessing of Fort Chip, on my dime, struggling to highlight the utter disregard with which the community has been treated. My life has become centered on my beloved Fort Chip. There was NEVER an objection to what I was doing.

I offered MANY times to forego any payment for my services, or at least cut my invoices in half – lest it impinged in any way on the NHBS budget. I did this earlier this year. I repeatedly offered to provide services pro bono. I was never taken up on this offer. Mostly I didn’t get a response.

Neither the Athabasca Chipewyan First Nation nor Métis leadership were given notice of my services being ended, and are fully supportive of me. I’ve had an outpouring of good wishes from across the community. The treatment staff at the Nursing Station continue to communicate with me, despite concerns about job security, and are as mystified as anyone about the circumstances surrounding my abrupt dismissal.

I would really appreciate transparency and closure from the Nunee Health Board Society, and the Mikisew leadership. There’s been absolutely none.
I simply wish to continue to provide on call services pro bono for Fort Chip.
I will continue to publicly advocate for the Fort Chip — God’s Country — that I love. Not for a second will I blink.