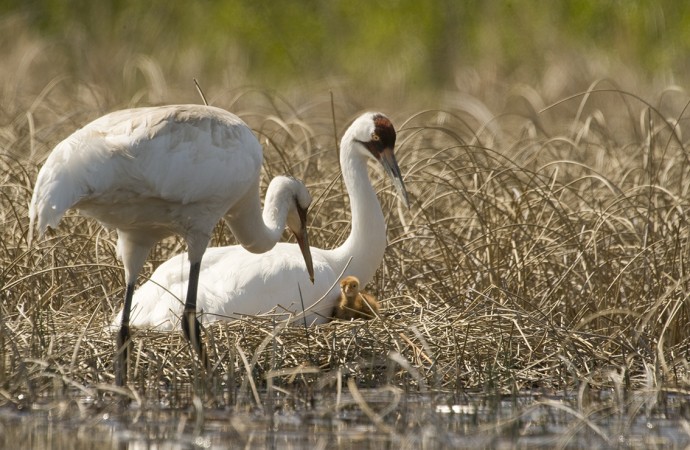 Some nesting whooping cranes of Wood Buffalo have been forced to relocate their summer homes this year as a result of low water levels and nearby forest fires.Klaus Nigge.

This time last year, biologists at Wood Buffalo National Park were elated to count a record-breaking number of whooping crane nests in the park, but recent counts indicate that trend has not continued into 2015.

In this year’s annual nest count survey, Parks staff found only 68 nests compared to 82 last year. Though not an official part of the study, they also counted six chicks during the assessment period from May 25 to 29.

To complete the annual research, conservation officers fly in a grid over last year’s nest locations. If the nests are not found, they fly in ever-widening circles around old nest sites in hopes of finding the birds’ new mating grounds nearby. They can also track cranes that have been fitted with satellite location bands.

Parks staff believe the low nest count means the cranes have moved outside of this research grid, the result of drought in the region.

“The habitat conditions are dry,” said Tim Gauthier, spokesperson for Wood Buffalo National Park. “The water levels in the ponds were lower than normal for this time of year. In other dry years, we have seen that this can force the cranes to travel further to forage for food and can make it easier for predators to access the nesting area.”

Long-time whooping crane enthusiast Ronnie Schaefer has also noticed the great birds building their summer homes in new locations. For years, Schaefer has watched two pairs of whooping cranes raise their chicks in the same spot outside of Fort Smith, in an area known as the Foxholes on Salt River First Nation land.

“Drought conditions have moved them farther into the wetlands and the Foxhole quarries, so it’s hard to get in there now,” Schaefer said. “Both nests were seen by Canadian Wildlife Service. They went to the west, but they’re still in Salt River Reserve lands.”

Heavy onslaughts of wildfire activity in the area have exacerbated the migration, Schaefer noted.

“The fires don’t help very much either. On the east side of Wood Buffalo there was a fire by Little Buffalo Falls last year that probably pushed them a little further to the west and to the north. This year we have that fire again by Little Buffalo, so there is concern.”

There is an upside to the cranes’ change in locations, however; both Schaefer and Parks scientists noted a new nest this year at the Salt Plains in the park, where they can be viewed by telescope from a lookout.

“We have never had a nest in this area before,” Gauthier said. “The Salt Plains is not a Zone 1 Special Preservation Area like the core whooping crane nesting area is. Although the pair could be seen at a distance by the public at the Salt Plains, access is limited by a creek and wet, muddy ground that discourages people from going too close to the nest site.”

Whooping cranes, the tallest of the North American birds, are an endangered species that summer in the muskeg of Wood Buffalo and winter at a coastal wildlife reserve in Aransas, Texas. Decades of conservation efforts have helped the wild population grow from about 15 birds in the 1940s to over 308 as of last year.