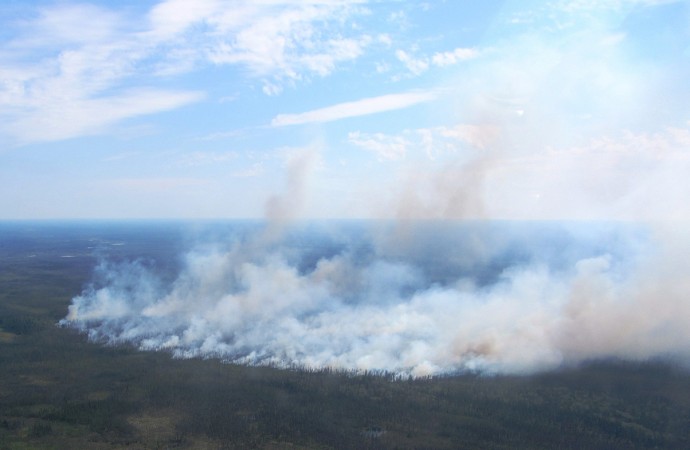 Crews were grounded and unable to fight Fire SS-027 near Sandy Lake last Wednesday after someone stole their helicopter fuel. The fire has since combined with two others in the region to form the large Swampy Lakes Complex that closed Highway 6 to Fort Resolution on the weekend.Photo courtesy of ENR / GNWT.

Firefighting operations near Sandy Lake in the South Slave were brought to a halt last week after crews and helicopters showed up to a fuel cache to find all four drums of Jet-A fuel had been stolen.

Firefighters were dispatched to two fires in the Sandy Lake area between Hay River and Fort Smith last Wednesday, including two ground crews and two helicopters intended to bucket water onto the flames. But when they showed up, there was not a drop of fuel to be found, meaning Jet-A had to be trucked in from Hay River.

“The helicopter had to land and could not fly until we got some fuel to him from Hay River, so there was a delay of about three hours. We just had to stand by until we could get some fuel,” said Daniel Allaire, manager of forests for the South Slave with the department of Environment and Natural Resources (ENR). “It was quite serious for us. It just put our operation at a standstill.”

Allaire said the fuel drums had been seen there less than a week before, meaning they were probably stolen early last week.

Each drum contains 205 litres of fuel weighing about 400 lbs, meaning the thief would have needed a trailer or a large truck with ramps to steal all four of the drums.

Based on the current cost of Jet-A fuel, Allaire estimated each drum was worth more than $300, not counting the cost of the barrel and the transportation to get it there.

This is the third cache where ENR has had fuel stolen since the beginning of the fire season. Earlier this year, several drums were stolen from a cache at Polar Lake near Hay River, and fuel was also taken out of a site north of Fort Providence.

Fortunately, neither incident occurred during a fire operation, like the one last week.

“This last one was quite a big concern because we were right in the middle of the fire operation,” Allaire said. “Helicopters need at least 20 minutes of fuel; they can’t just fly until they run out. Also, they have to keep in mind if someone were to get hurt, they need to have enough fuel to get the nearest community to get medical attention. They were counting on that fuel to be there.”

The department has reported the incidents to the RCMP, who are now investigating.

Allaire believes it’s the work of one individual with knowledge of ENR’s fuel cache network.

“I suspect there’s an individual there doing this and using the fuel for his diesel truck,” he said. “Somebody who’s quite aware of where our fuel caches are, because except for maybe one or two where you can actually see the fuel from the road…most of the caches are tucked away. You can’t see them as you drive. You would have to go in.”

The fuel caches are located along the highway in order for ENR’s trucks to be able to easily drop drums off. But due to the string of thefts, Allaire said the department is considering moving them by helicopter away from road access, despite it being costly and inconvenient, or locking them up in a sea-can.

The fuel was never previously locked up because theft wasn’t a huge problem, Allaire said.

“This year is the worst I’ve seen. It’s pretty rare that we’ve had fuel stolen before. It happens sometimes, maybe a drum, or someone takes some of the fuel out of one drum, but to take it all at once and clean out the fuel cache, that’s quite unusual,” he said.

According to the department, there have been no reports of stolen fuel in any of the other fire management regions.