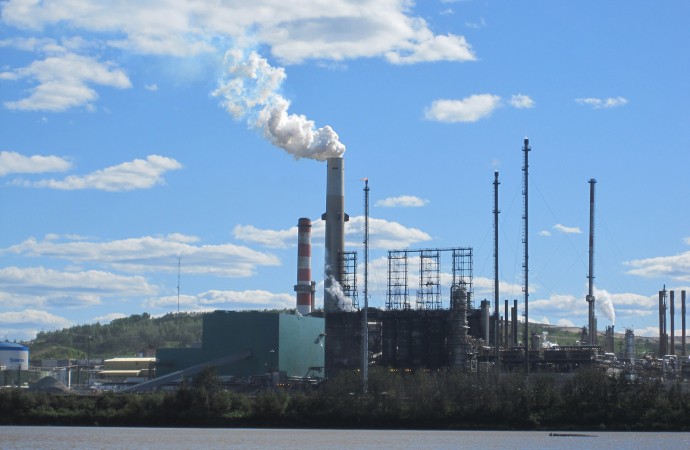 Emissions from an oilsands upgrader enter the atmosphere across the Athabasca River near Fort McKay.Francois Paulette.

A new study on air quality in Fort McKay asserts the community in the heart of Alberta’s oilsands can breathe easy without fear for their health, but the First Nation says the research only gives half of the story.

A recent paper by Warren Kindzierski of the University of Alberta concluded air pollution in Fort McMurray, Fort McKay and Fort Chipewyan is not a threat to public health, after reviewing air quality data over a 15-year period.

While the community feels fortunate to have that kind of long-term data, Fort McKay First Nation’s senior environment and regulatory manager Daniel Stuckless called the study “partial,” saying the parameters monitored for may apply in larger city centres, but do not take into consideration the unique reality of living amid the oilsands.

“Those contaminants are typically looked for in assessing air quality in major centres and commonly used across the world, but they’re not really entirely appropriate just for the oilsands region, and particularly the community that lives in the middle of the boreal forest amongst all this industry,” he said. “There’s a lot more that’s emitted from stacks or tailings pipes or off tailings ponds that are not measured on a daily basis and are not factored into the assessment on good or poor air quality.”

Kindzierski’s study analyzed the air for concentrations of sulfur dioxide, nitrogen dioxide (NO2) and fine particulates, concluding that there has been little change in concentration from 1998 to 2012. The research suggests small increases in NO2 in Fort McMurray and Fort McKay were due to population growth rather than industry, and that the average air quality is comparable to that of other cities. There were no indications of air quality trends in Fort Chipewyan.

“There is a perception in the Athabasca oilsands region that air quality is poor,” according to Kindzierski. “Air quality in the communities we studied is actually quite good when compared with larger cities in Alberta and around the world.”

The problem, according to Stuckless, is that Fort McKay is not comparable to other cities, due to its close proximity to bitumen upgraders and tailings ponds. He said there are hundreds of chemical compounds being emitted from stacks and ponds that were not measured for in the study.

“(Kindzierski) wouldn’t have 15 years’ of data for most of those (contaminants). Most of them, if they are measured, are periodic or spotty, at best, maybe trial or short-term monitoring, so it’s really hard to do a trend analysis with lengthy data gaps,” Stuckless said. “We just don’t know what the long-term effects are from some of these pollutants.”

Stuckless said the community has detected compounds through its own monitoring that aren’t showing up in Environment Canada’s National Pollutant Release Inventory.

People in Fort McKay often complain of strong odours in the community and physical symptoms believed to be related to air pollution from oilsands production.

“I know, myself, I’ve experienced physical reactions to some of the events that we’ve had in the community, like minor irritation of the throat and nose and mouth and eyes. Sometimes they’re annoying and sometimes they’re pretty severe that you want to get them checked out,” Stuckless said.

There are also indirect effects where people change their behaviour, he said, choosing not to head out on the land or let their children outside to play, but the largest concern is that residents feel they don’t have enough information, which causes stress.

“It doesn’t give us a lot of confidence that the system is working and that Alberta is living up to this world class regulator image that they’re trying to live up to,” he said.

Fort McKay withdrew from the Joint Oilsands Monitoring Program over concerns with how First Nations are integrated into the program. For those same reasons, they are also not part of the Alberta Environmental Monitoring, Evaluation and Reporting Agency, the government organization responsible for all environmental monitoring and testing with the province, including air quality monitoring.

Stuckless said they are now advocating for the improvement of government regulations, emissions management and monitoring, hoping to integrate health into the regulatory regime.

“We don’t expect that things are immediately going to change because people can flip the switch, but if we’re going to develop this resource around this community for another 50 or 75 years, we’ve got lots of time to get the proper equipment in place and get the system right,” he said.