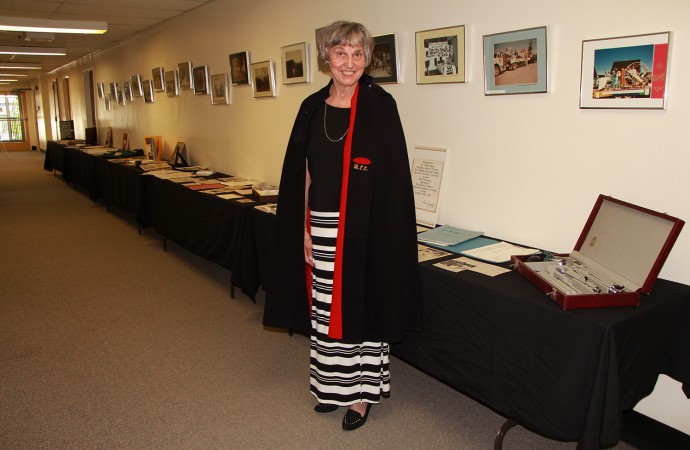 Retired matron Ruth Webb shows off her nurse’s cape at the 50th anniversary celebration of the H.H. Williams Hospital, held on June 27. Webb donated the cape, which will eventually be displayed along with other memorabilia at the community museum.Dali Carmichael.

“We all did the packing, we all did the labour,” Webb said. “We were excited to move in here. I drove an old truck that was standard that I didn’t really know how to drive and the door wouldn’t stay closed. I transported a patient, Joe Landry; I’d like to find his family and apologize for the bumpy ride.”

Local history buffs and former hospital employees came together on June 27 to celebrate the 50th anniversary of the original H.H. Williams Memorial hospital, which opened its doors on June 28, 1965.

Griffiths spent months curating memorabilia for the anniversary event. Tables set up in the old wing of the hospital spilled over with archival footage, original blueprints and financial documents, old medical equipment and newspaper articles following the chronology of the facility’s history. Some of the items were donated by former staff members, while others were dug out of the hospital basement.

“It was wonderful working here,” Webb said, looking down at a navy-blue nurse’s cape she donated to the collection. “It was great for new nurses and medical students, because in the small community we got to do a bit of everything.” 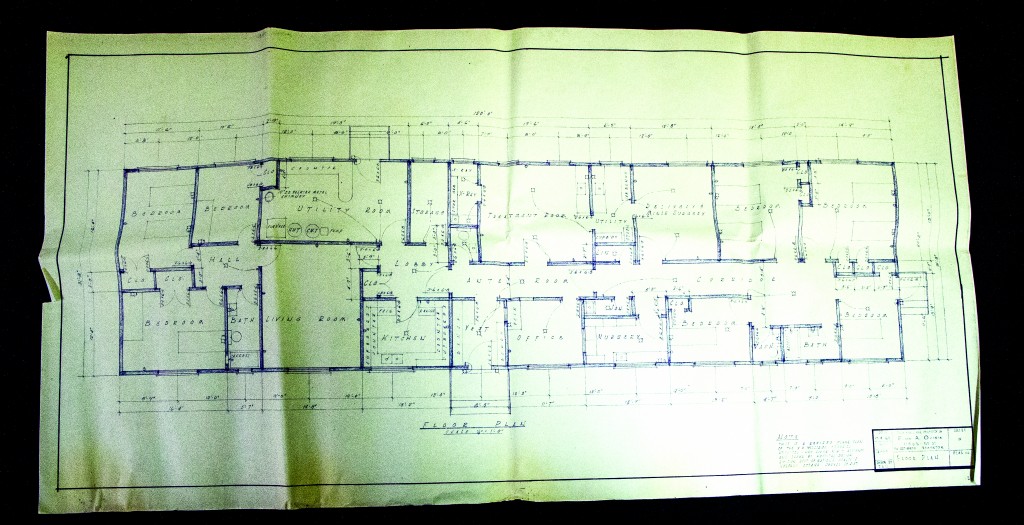 These original blueprints of the 1965 hospital were just one of the archives on display for the public last weekend. Other artifacts included photographs, news clippings, old medical equipment and financial papers.

A rich history of health care

Before the 1950s, health care in Hay River was delivered by a small Anglican mission that had arrived in town in the late 19th century, made up of mostly nurses. They worked out of a miniscule building, sometimes traveling to resident’s homes to provide care.

A nursing station with three beds was opened on Vale Island in 1953 by the Sub-Arctic Mission Association, founded by Rev. Ken Gaetz of the Pentecostal church. Gaetz became a prominent name in the community, shaping Hay River’s health care as the hospital’s administrator for several decades.

In 1957, Hay River’s first small hospital opened, a six-bed operation with a handful of nurses on staff. Funds for the facility were donated by the late H.H. Williams, a former trustee on the board of the Toronto Sick Children’s Hospital who left his estate to the Pentecostal Assemblies of Canada, to be used specifically for health care.

In 1962, that hospital was expanded to fit 12 beds. A tight-knit team of about 10 nurses and one doctor ran the show until a devastating flood hit Vale Island in 1963.

It was decided a new hospital was needed in an area less prone to natural disaster. Soon, development of “new town” began and the new H.H. Williams Memorial hospital was established. The building held accommodations for about 22 people and was staffed with a rotation of mission nurses relocated from southern Canada.

At that time, the Hay River hospital provided services to people all over the South Slave, from Pine Point mine to Fort Simpson.
As the largest and most centrally-located hospital in the region, employees were trained to handle a host of emergency situations, from medevacs in the field to maternity services in the hospital.

In 1976, an extension made room for about 40 acute care patients and, for the first time, provided room for a 10-person chronic care unit.

As new technology and a wide array of specialty services were introduced, H.H. Williams grew into a sophisticated operation.

Eventually, the GNWT took over the hospital from the church in 1995, opening up the doors for more non-mission staff to come aboard.

“It’s amazing the history of health care in this little community,” said public administrator Mike Mahar, who started working in the hospital in 1972. “It’s gone from a little shack to what our new facility is across the street, it’s just crazy.”

As part of the weekend celebration, dignitaries and out-of-town visitors like Webb – who now calls Stony Plain, Alta. home – were invited to walk through the new health centre.

“It’s beautiful and amazing; it’s exactly what I would have wanted as a nurse,” Webb said with a wide smile. “It makes me think about joining the practice again at the age of 72.”