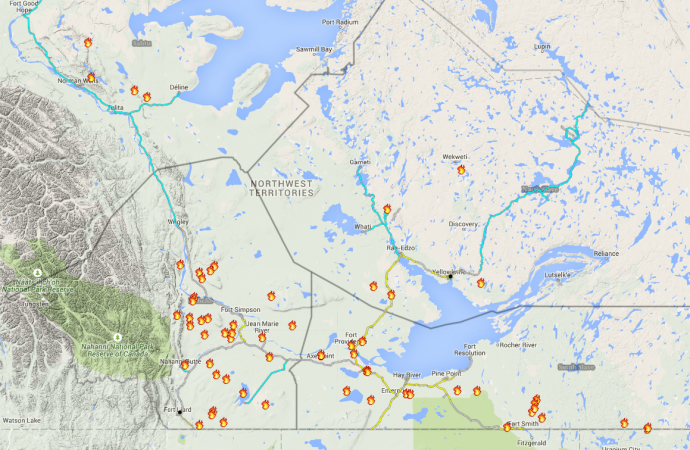 Another 75 fires started in the NWT over the last week, bringing the total to date to 158, with 129 still burning.

The communities of Hay River and Jean Marie River have been advised to enact their emergency measures plan in preparation for possible evacuation due to nearby forest fires.

Lightning last week and over the weekend saw 75 new fires in the territory, doubling the total number of fires that have burned since the beginning of the season. Of those, 129 are still burning, and a total of 182,000 hectares have burned.

Pervasive drought conditions across the southern half of the NWT have resulted in extreme fire behaviour that has thwarted initial attack measures by helicopters, bombers and ground crews.

“In a normal situation, because of the fire intensity, crews can only withstand fires that have flames that go up to their eyes, but in these cases here, they were experiencing fires with flames that would get up into the trees and undertake crowning, moving at a greater rate than the resources can slow the fire down,” said Richard Olsen, fire operations manager with Environment and Natural Resources (ENR).

“Extreme behaviour is moving at a faster rate than the resources you have available to calm the fire. Really, the resources prove ineffective at that point and we have to pretty much pull off and reassess and look at other options.” 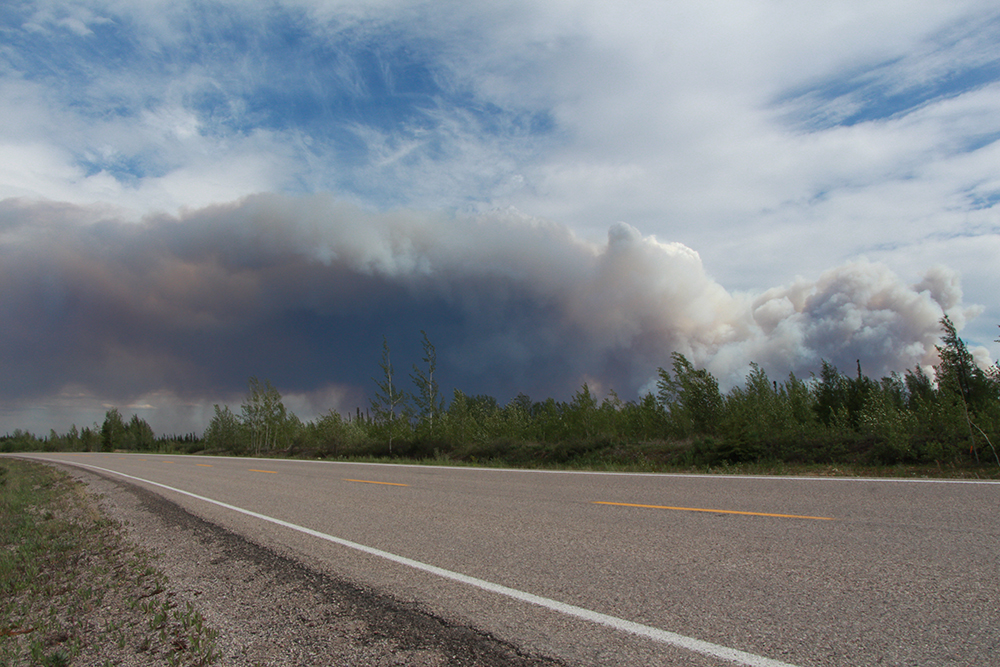 A fire burns near Buffalo Lake, just off of Hwy 5 leaving Hay River. The town has started voluntary evacuations of residents in the Paradise Valley and Patterson Road areas.

Such was the case south of Hay River, where two fires have grown together to become the Paradise Complex. That fire escaped initial attack attempts on Saturday and is now in excess of 5,000 hectares, located just 10 km from the nearest town infrastructure.

While an incident management team is doing work to create a barrier between the town and the fire – primarily cat guards and ignition operations to stall the growth of the fire – officials say an expected change in wind direction is likely to push the flames towards Hay River.

As of Monday afternoon, a fire 3 km northwest of Jean Marie River was also being pushed by winds towards the community.

“There was a recommendation that they be put on alert because of fire risk,” Olsen said. “We’re updating emergency measures but any change in fire behaviour may affect the community at this time.”

Seven tankers were deployed to the fire on Sunday night and continued work on it on Monday.

Another series of fires 20-30 km south of Fort Simpson, known as the Antoine Complex, are also being prioritized by ENR crews. Two of the fires have grown to 5,000 hectares and have the potential to impact the community, though Fort Simpson is currently not at risk. 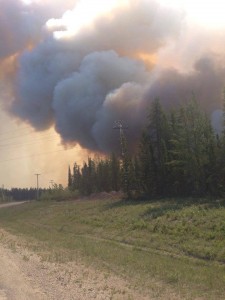 The NWT is just one of many jurisdictions burning across the North and western Canada, where communities are being evacuated in Saskatchewan and likely soon in Manitoba. Over 600 new fires exploded across western Canada over the weekend.

The extreme fire season to the south has meant national resources are stretched thin and fires everywhere need to be prioritized.

“Within Canada, resources are very tight. Most people are actively working fires and so available resources to be shared within mutual aid agreements across Canada, things are becoming quite difficult,” Olsen said. “So we really are tasked with making sure we prioritize our fires and make really good use of the resources we have in place.”

Currently 28 five-person crews are working throughout the territory, along with an additional 70 emergency firefighters from within the NWT. Forty more firefighters have been imported from Ontario, along with a fire behaviour specialist.

Fires being actioned across territory

Outside of those priority areas, other fires are being initial attacked in the South Slave.

One northeast of Fort Providence also escaped initial attack, and will be actioned further once more resources become available. Two other fires near Fort Providence were brought under control, while others are being monitored, including two near the turnoff to Kakisa on the north side of the highway. Those are currently limited by last year’s burns, but with the potential to impact travel due to smoke.

An incident management team has also been placed on a series of fires in the Pine Point area, called the Swampy Lakes Complex. One of those fires jumped Highway 6 on the weekend, closing the roadway. Northwestel and NT Power Corp. infrastructure are at risk of burning, and crews are expected to be working on that fire for seven to 10 days, minimum, but the highway remains open.

Work is also being down on another fire 60 km south of Behchoko along Highway 3. Crews were prepared for an ignition operation, but weather conditions that brought erratic winds stalled those plans. A burnout is planned for when conditions become adequate.

As well, five new fires northeast of Fort Smith are threatening numerous values south of the Taltson dam, an area of high use by local land-users. Work is being done on three of those to protect values and limit growth.

Two existing fires – one west of the Taltson River and the other south of Tsu Lake – continue to burn, with the former having growing to well over 30,000 hectares in size due to extreme fire behaviour. It’s now mainly being monitored, as is the large fire along Highway 3 south of Behchoko where crews have been working for over a month.

“Both those fires are contributing quite a bit to smoke that people are experiencing in the Fort Smith area,” Olsen said.

A new fire that was just being assessed Monday was located 10-12 km southeast of Wekweeti, but a response had yet to be determined as of press time.

Based on the 20-year average for this time of year, the NWT would normally see around 66 fires and 223,000 hectares burned. 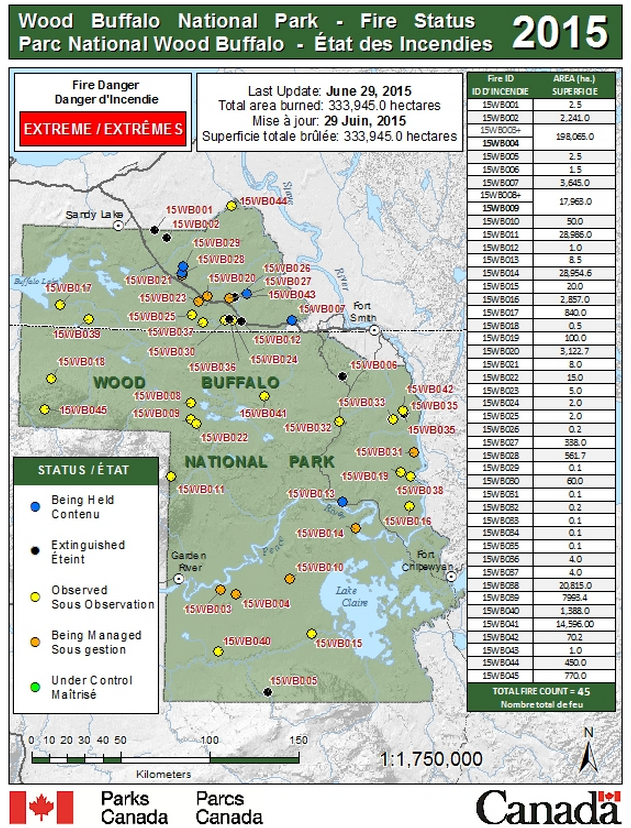 A Wood Buffalo National Park fire map shows 45 wildfires burning in the park as of June 29.

A total of 45 fires were burning in the park as of the latest update on Monday.

With lightning strikes throughout the park, crews have been dispatched to protect not only the highway, but values at Sweetgrass Station, Garden River and Peace Point over the last week, and crews have been imported from across the country.

The largest fire continues to burn near Garden River in Alberta, totalling close to 200,000 hectares in size.

In Alberta, Highway 35 towards the NWT was also closed at points over the weekend. It opened again Monday afternoon, but was at risk for closing again on short notice due to smoke from a fire near High Level.