The debate on climate change is over, time for action 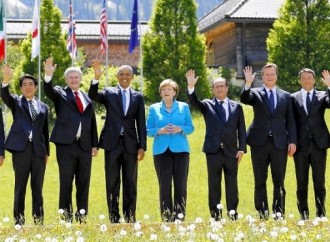 With the stroke of a pen, the leaders of the G7 countries last week completely changed the dynamic of the talk about climate change from a debate over whether or not it exists, to recognition that it must be dealt with by ending the use of fossil fuels completely. That change was amazing and profound.

More and more scientists and leaders are raising their voices against the carbon-based economy on which the world currently runs and the damage it is causing. The build-up of carbon dioxide in the atmosphere is altering weather patterns, wreaking havoc on our lives. Equally traumatic impacts are taking place in the oceans from the flood of carbon being poured into the atmosphere from our vehicles and industries. Carbon is absorbed into the water causing acidification of the oceans, resulting in the loss of plankton, those little critters at the base of the aquatic food chain. That will mean devastated fish populations. Many species of mammals, including humans, are dependant on the oceans for food. The oceans are already being over-fished, so face double jeopardy. A catastrophe of immense proportions is looming.

A hundred years ago, our ancestors experienced the loss of the massive herds of prairie bison, the flocks of carrier pigeons that filled the skies for hours on end and, more recently, the Atlantic cod stocks, all once plentiful but suddenly all but vanished. In each case, those losses were a direct impact of mindless, negligent practices during a time of rapid, large-scale human expansion. Most of those tragedies took place at an earlier time in human development when populations were low and mass industrialization had not yet taken place. They were a warning, the canary in the coal mine, demonstrating how vulnerable the world can be.

Our race is like a steamroller on the planet now and the magnitude of reaction by the planet’s systems to what we are doing will be profound; yet our societies continue to behave in ways that are ignorant and irresponsible, risking turning the future of our children into a nightmare.

Thank goodness for Angela Merkel! Go figure, it took a woman to show a group of men that common sense was needed in dealing with so obvious a problem. On her lead, the G7 summit in Garmisch-Partenkirchen, Germany on June 8 committed its member nations, some of the main industrialized countries of the world, to shift completely to a zero-emission energy system before the end of the century.

The discussions will no longer be about whether or not climate change exists or more debates over reducing percentages of carbon emissions, targets that no country was meeting anyway. Instead, we are now on a path to ending the carbon-based economy altogether.

Note that Canada’s prime minister came to the G7 party adamantly opposing the plan to decarbonize the world economy. Imagine the pressure Stephen Harper must have faced to finally buckle. Canada has received failing grades over two decades for its inability to meet its carbon emission targets. Under the Liberal governments of Jean Chrétien, we signed agreements and then ignored them. Under the Harper Conservatives, we withdrew from the agreements, blamed the rest of the world for the problem and actively ramped up our carbon producing industries.

Although the G7 meeting managed to achieve an agreement, there is still no plan on how to achieve the new goal. The climate summit in Paris this coming December has the potential to actually do something toward invoking a carbonless economy. Will a way to excise carbon from our collective lives by the end of the century as per the G7 agreement be decided then? One would hope.

But will that end of the century timeframe be soon enough? By then, the changes wrought to our planet may be too great to reverse. There is hope, however. Ways to move to a new economy based on innovative clean energy systems are being developed that could accomplish the goal much faster.

Stanford University engineers, for example, have developed a plan to convert the United States to 100 per cent clean, renewable energy by 2050, through state-level initiatives. In Canada, Quebec and Ontario, the two largest and most populous provinces are heading that way as well.

Private initiatives like the Solutions Project (http://thesolutionsproject.org) are gaining popularity. That group says “100 per cent clean is 100 per cent possible,” and shows ways “to build a stronger economy, healthier families and a more secure future.”

Humanity is on the cusp of a dramatic, all-encompassing change, so transformational the industrial revolution will be dwarfed in magnitude. The pressure is on to do it quickly, or face dire consequences.