‘Well on our way to another record drought code year’: NWT fire manager 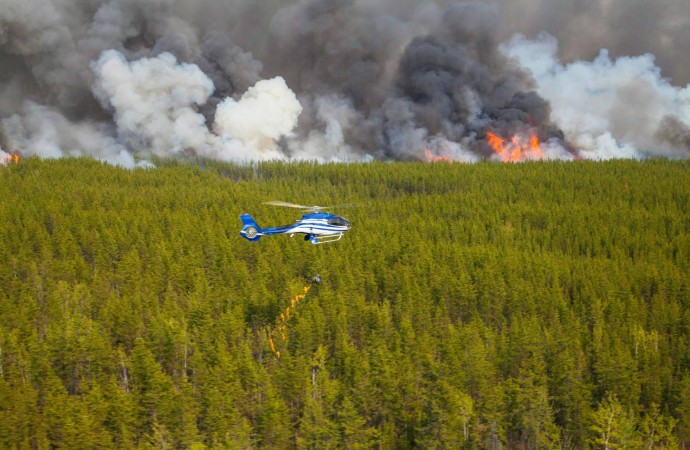 A helicopter uses a drip torch to conduct a controlled burnout operation along Highway 3 south of Behchoko on May 29. The fire, currently the largest in the territory, began as a holdover from last year, indicating the severe drought currently affecting the NWT.Photo courtesy of GNWT/ENR.

With persisting dryness and temperatures about to rise across the Northwest Territories, fire officials say drought code indexes are expected to spike above last year’s record high levels in the coming weeks.

The driest spot in the territory, located north of Fort Providence in the vicinity of last year’s massive Birch Lake fire complex, is currently reporting a drought code of 650 and on its way to reaching its own record-breaking mark of 1,024 recorded last year — the first time in history the drought code broke the thousand mark in the NWT.

“It’s very, very dry,” said Richard Olsen, manager of fire operations with the department of Environment and Natural Resources (ENR). “We’re well on our way to making a record drought code in that area again this year.”

The drought code is a computer-generated measurement that factors in precipitation, humidity, wind, temperature and dryness of large fuels to determine the extent of dryness. On the scale, 400 is considered drought.

Dryness is currently impacting most regions of the territory, especially the Dehcho and the South Slave, where places like Fort Smith are sitting at drought codes of 554, “well in advance of drought codes for this time of year,” Olsen said. “That’s almost something we’d expect to see around the end of July or even into August on an average here.”

Olsen said crews are having difficulty bringing fires under control because of their ability to burn deep into the ground and persist even with some rain and lowered temperatures, like the fire along Highway 5 located approximately 40 km west of Fort Smith at the border of Wood Buffalo National Park.

“There’s really dry conditions, and the fire has been exhibiting some symptoms of that: re-lighting and really deep burns that are requiring a lot more work than we would expect in a normal year,” Olsen said.

While the territory saw some downturn in heat over the past couple of weeks, Olsen said that is likely over now as a high ridge system settles in above the NWT. Though that system will include some troughs, bringing rain and lightning, he said the amount of expected precipitation won’t be enough to bring water levels back to their norm.

“I think at best we’re going to see maybe some large, isolated thundershowers, so there’ll be rain with those…but no guarantee of an overall downturn where the rains cover the whole regional area,” Olsen said. “In order to bring conditions in the NWT and water tables back up to normal, we’re looking at two to three inches of rain to be just enough to start setting us back towards normal.”

Seventy-five fires had burned just over 141,000 hectares of forest in the NWT as of June 23, not counting those within the jurisdiction of Parks Canada. Of those, 52 are still burning.

Compared to the 20-year average, that’s almost double the number of fires expected for this time of year, which sits at 41; for hectares burned, its more than double the expected 67,000 hectares.

It’s even more fires than seen at this point during last year’s record fire season, Olsen said. Last year at this time, there were a total of 63 fires, though those had consumed more hectares, at 165,000.

The majority of fires continue to burn in the Dehcho and South Slave. Ten are holdover fires from last year – an alarming number that signals the intense dryness of the land. Seven of those are within the area between Behchoko and Fort Providence, though they extend north to Whati and even past Fort Simpson.

“One fire that occurred as the result of a holdover on the Liard River is now out, but it was interesting to note the extent of the holdover fires was that far into the west,” Olsen said.

Though the majority of fires are being monitored for values protection, around 45 firefighters continue to work on several across the territory. One of note is a fire located 80 km southeast of Fort Resolution, which crews are attempting to keep east of the Taltson River system.

“The two cabins had not been used for many years and were in disrepair. One had fallen over and the roof had started to collapse on the other one,” she wrote in an email. “Both cabins were burned in the fire.”

One of the cabins was owned by Henry and Eileen Beaver, who were notified after the cabin had burned down.

Olsen said some action has been taken to protect the large camp where Aurora College holds its summer field camps for the Environment and Natural Resources Technology Program at Tsu Lake. Crews did a burnout operation to protect the numerous cabins and other buildings at the site.