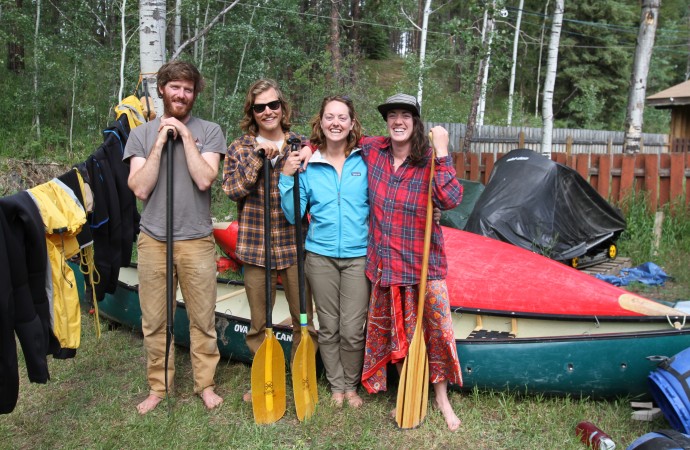 Paddlers Liam Law, left, Dylan Bajer, Justine Wilmot and Sarah Steele Johnston take a break from their expedition with a stop in Fort Smith to explore the whitewater on the Slave River.Don Jaque.

From day to day, it was almost a seamless transition coursing around the bends of the Athabasca, Slave and Mackenzie Rivers over a 2,200-km canoe voyage to Fort Simpson.

But with the expedition now complete, the quartet of paddlers is reflecting on the distinct “mood” of each river and the strong connections they forged with the land and people along the way.

Four canoeists from Alberta recently finished a 63-day trip starting in Barrhead, Alta. on May 13 and ending in Fort Simpson July 14.

The trip started as a dream of Dylan Bajer, originally from Barrhead and an employee for Nahanni River Guides in Fort Simpson, who one day wanted to “paddle to work.” Along with his partner Justine Wilmot, they were able to collect two more adventurers – Liam Law and Sarah Steele Johnston – for the trip of a lifetime. 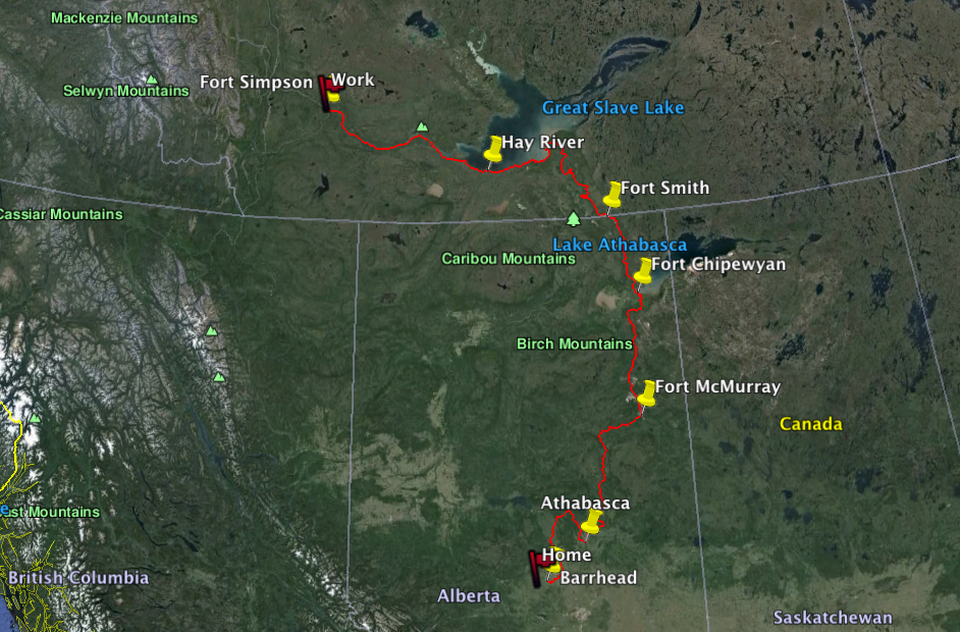 The paddlers tracked their progress using GPS along the 2,200-km expedition from Barrhead, Alta. to Fort Simpson, NWT.

Along the way, the crew stayed in Fort Smith for a week to play on the whitewater and took time to connect with First Nations in each community – a privilege that deepened the experience for the group.

“We decided to write letters to all the indigenous nations before we left to request permission to travel through their lands, and some were very inviting and asked us to meet with them,” Law said.

That included a tour of the Fort Providence area with Deh Gah Gotie Chief Joachim Bonnetrouge, who shared the history of the land and showed them to a lodge.

“He told us that once we hit Fort Providence, all the way to Fort Simpson we were under their care,” Bajer said.

Law said he felt it was important to “disrupt” the colonial cultural patterns of non-indigenous explorers coming to the North without engaging its First Peoples.

“We got to learn a lot,” he said. “It made the trip meaningful and significant in many ways.”

Apart from connecting with First Nations along the way, each of the paddlers formed their own connections to the diverse landscape over the thousands of kilometres.

For Wilmot, who hails from Ontario but has been living in Alberta for a number of years, it was a surprising comfort to see the Canadian Shield again.

“I felt the love of home in the Northwest Territories, which was an unexpected place to rekindle with that geography,” she said. “I got these flashbacks of being back in Ontario. I didn’t expect to have that experience; I didn’t realize I had a longing for home.”

It was the first major canoe expedition for Steele Johnston, who said she spent most of the trip reflecting on the words of an elder they met when the group was in Fort Smith, who advised them to thank the water.

“I started writing poems connected to a place in nature expressing my gratitude,” she said. “I wrote one on a rock, one on driftwood, one on a leaf, one on a feather, and then gave them back to the land.”

For Bajer, there were so many highlights, choosing a favourite is “like picking a berry from a bush.” He said every turn of the river provided a new gift, from the rapids near Fort Smith that “shake the earth” to the vast flow of the massive Deh Cho.

“We started on a river that was about the width of our canoe and ended on the Mackenzie,” he said. “Around every bend was a gift of different scenery, the vastness of the land used by the people who have lived there forever. To use that gift was a gift to us.”

While it’s unlikely that all four paddlers will get together for another journey of such magnitude in the NWT, each is now planning future trips that would explore other “gems” of the North, like the Thelon, Taltson and Coppermine Rivers.

That is even the case for Steele Johnston, who is contemplating moving to Fort Smith after enjoying her week on the Slave River.

“I’m not even a paddler – I’m a rock climber,” she said with a laugh. “And I want to live there next summer.”