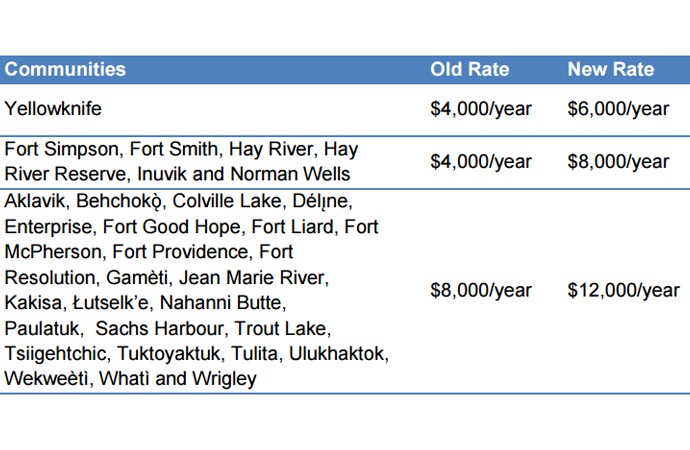 New remission rates will allow students with remissable loans to pay back their debt faster with each year spent in the NWT.Photo: GNWT.

Students who are undecided about moving or returning to the NWT have a host of new incentives to lure them back and keep them in the territory, starting this fall.

The territorial government is busy setting up its revamped student financial assistance program in time for Sept. 1, when thousands in new money will become available to students and graduates who decide to remain in the NWT or make their way back North.

While the effort is partly about putting money in students’ pockets, it ties into the wider set of government priorities aimed at addressing the territory’s dwindling population and creating a robust labour force, not just in Yellowknife, but in all NWT communities.

“It’s not just about assisting one student; it’s about a broader strategy of encouraging our Northern students to come back, and encouraging southerners who have studied to come to the NWT,” said Andy Bevan, assistant deputy minister of Labour and Income Security with the department of Education, Culture and Employment (ECE).

“It’s really important to us that we’re supporting students not only, obviously, to achieve their own ambitions, but also to the extent that they are interested in returning to the NWT labour market and participating and benefitting from the NWT economy.”

Non-Aboriginal students returning to the NWT will be able to “pay off” their remissable student loans faster than ever before with increased rates for communities throughout the territory.

For each year spent back in the territory, students will see between $6,000 and $12,000 of debt forgiven, depending on where they live.

Those returning to Yellowknife after postsecondary will be able to shave $6,000 per year off their remissible loans, while those in the regional centres of Fort Simpson, Fort Smith, Hay River, the Hay River Reserve, Inuvik and Norman Wells will see debt forgiveness in the form of $8,000 per year – double the previous rate of $4,000.

In all of the remaining smaller communities, one year spent back in the NWT will see a whopping $12,000 come off students’ remissible loans.

“This is in recognition not only of government’s decentralization policy, but the broader objective to make sure that our communities are vibrant,” Bevan said.

Remission is only available as a benefit to non-Aboriginal residents, as Aboriginal Northerners receive grants for living allowance. For students with remissible loans who don’t return to the territory, those loans become repayable loans.

New Northern Bonus up to $10K

For students returning or moving to the NWT after postsecondary, a highly anticipated new benefit is a $2,000 annual Northern Bonus, which basically amounts to no-strings-attached, free money to be applied to your student loans, as long as you stay in the territory.

That money will be received annually to a lifetime limit of $10,000, and is even available to southern students who’ve lived in the territory continuously for one year, meaning the bonus won’t be in hand until September 2016 at the earliest.

“The bonus is about encouraging people to stay longer,” Bevan said. “We want them to demonstrate a 12-month commitment to the NWT and then they would be rewarded.”

For those Northern students residing in or returning to the NWT, an additional benefit is the new zero-percent interest rate on all student loans. The application process for the new interest rate is still in development, but officials say it will be similar to the current remission process for NWT student financial assistance.

“There will be no difference, essentially, whether somebody is studying in Fort Smith versus studying at the U of A; there is no difference whether they come back or stay,” Bevan said. “Once they’ve completed their studies and they start to repay either through remission or through repayment proper, their loans will be at zero per cent interest for those who prove themselves to be Northern residents.”

While the new rate is set to kick in on Sept. 1, 2015, students will need to prove 12 months of residency before they officially receive the new rate, meaning it won’t affect payments until Sept. 1, 2016.

You can receive unlimited loans as long as you keep repaying

Students who pay down their loans can now access additional funding, regardless of what semester they are on in their education.

The previous 20-semester funding limit has been lifted and replaced with a revolving loan limit in order to encourage Northerners to pursue higher levels of education like graduate studies and further trades certification.

Payment on the loans not only includes actual monetary repayment, but also remission.

“We want to make sure that we incent people not only to return…but it’s also actually about encouraging continuing education, or re-schooling,” Bevan said.

Basic Grant funding for Aboriginal students from the North and students educated and residing in the NWT will see higher amounts for tuition and books.

Students receiving supports through student financial assistance are already asked for their consent to be contacted by various territorial government departments about possible employment opportunities.

But because GNWT internships, summer student positions and jobs are limited, ECE wanted to open that up to private employers, like mining companies, as well. Students can now give permission to be contacted by potential private sector employers in the hopes that college and university graduates can find a job and stay in the NWT.

“Our mandate as a department also includes making sure that the labour market of the NWT is trained and sufficient to meet employer and industry’s needs,” Bevan said.

The application process for student financial assistance has also moved online, simplifying the process and making the program more accessible. The program also has a new Facebook page, ‘NWT Student Financial Assistance,’ to connect more youth with the program.