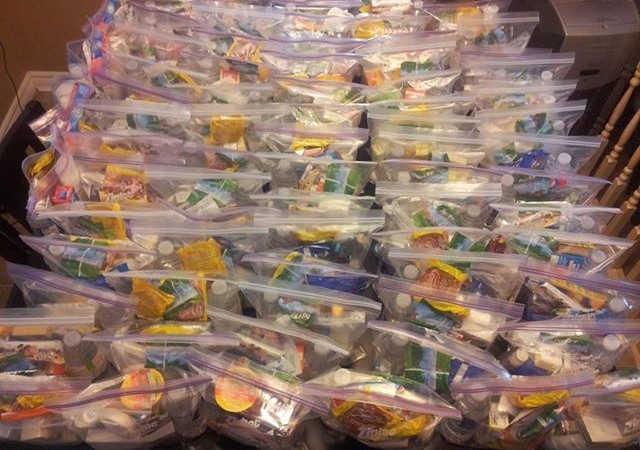 Over 170 “goody bags” stocked with food and toiletries were handed out to Yellowknife’s homeless at Christmas in July 2014. This year, volunteer Renee Sanderson is aiming for 200.Photo: Renee Sanderson.

For the third year running, one of Santa’s busiest elves is delivering presents to Yellowknife’s homeless population through a Christmas in July donation drive.

Over the past several months, Yellowknife resident Renee Sanderson has been collecting monetary and clothing donations from people across the NWT and northern Alberta. On July 25, she and a handful of fellow volunteers will stand outside Safe Harbour Day Shelter, handing out gifts to those who need them most.

Her goal this year is to hand out 200 “goody bags,” as she calls them, stuffed with hotel-sized toiletries, feminine hygiene products, snacks and clothes. Last year she donated 178 packages, up from 73 during the first year of the operation.

It’s only this time around that Sanderson started collecting clothing for the cause, after receiving a request made from shelter staff who say it is one of the harder items for Yellowknife’s homeless to access.

“Throughout the year I’ve been collecting clothes, shoes, backpacks, stuff like that,” she said. “We’re kind of a little bigger than last year. We’re getting more sponsorship from more companies.”

The majority of non-edible products were donated by regional organizations and businesses, including Yellowknife Motors, Glen’s Independent Grocer, Wal-Mart and Adam Dental Clinic, among others. Additionally, individually packaged food was purchased using almost $800 in donations Sanderson collected through a Go Fund Me page.

Learning to be compassionate

It was a mix of her parents’ compassion and her own experiences that inspired Sanderson to start the Yellowknife Christmas in July three years ago.

“I was raised by two very generous parents who – still to this day – have an open door policy when it comes to helping family and friends,” she said. “Having gone through my own trauma in my life, it has made me more empathetic to what one can go through. It’s especially harder if they have no support systems in place or if they have exhausted all their support avenues. The people on the streets have been so disenfranchised and poverty stricken that we need to remember that they are still human and we need to show them more compassion, understanding and respect.”

It’s a lot of work, but when Sanderson finally gets to play Santa and distribute the packages, the reactions she gets makes her efforts worthwhile.

“To be able to share that moment with them and see the excitement on their faces when they receive a goody bag is just a fantastic feeling,” Sanderson said. “If people would just give a bit of their heart rather than a piece of their mind, what a better place we would be living in.”

To those considering ways to give back to their own communities, Sanderson says to think realistically about projects that can be completed locally.

“A quote that resonates with me is, ‘I always wondered why somebody didn’t do something about that and then I realized I am somebody,’” Sanderson said. “You don’t need to be rich or famous to help make a difference in your community. I really enjoy doing this every year, but if we can come together and make this an event where businesses and organizations commit to supporting it annually, we could accomplish so much more.”

Sanderson’s charitable spirit isn’t only present in the holiday off-season. She encourages her fellow employees to participate in annual fundraisers as well, like the Movember movement for men’s health and the Canadian Cancer Society’s Relay for Life.

“Giving out goody bags to the homeless in July is just the beginning,” she said.

To donate or to learn more about how help with Christmas in July, head to http://www.gofundme.com/rsx5t8.