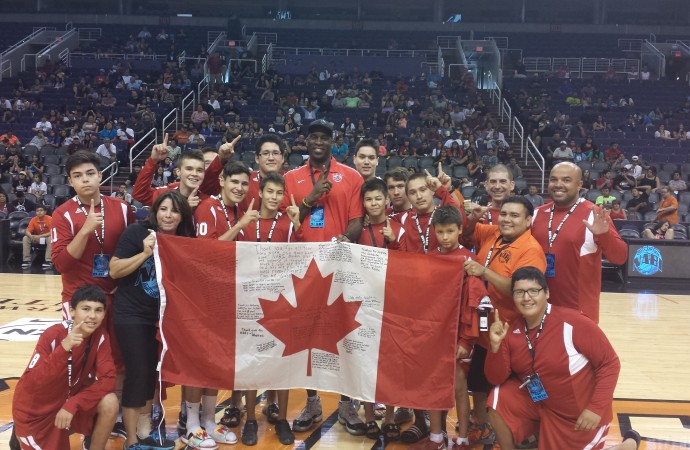 The NWT boys who represented Canada at the 2015 Native American Basketball Invitationals (NABI) might not have captured any wins at the tournament, but they did come away with experience and a new optimism for the future.

By the end of the tournament – held in Phoenix, Arizona from June 30 to July 4 – the boys had finally started coming together, said coach Neil Barry, showing impressive results for what he called a “green team.”

“We didn’t get a win, but our last game was a playoff game and we lost by six points,” Barry said. “Going from losing 20 to 30 points to only six shows a little improvement, but not soon enough, I guess.”

Throughout the tourney, the boys played in four round robin and two exhibition games, using the opportunity to practice playing against a new pool of players with a wide range of skills.

Some of the most impressive plays came from the team’s youngest members, Barry said.

“One player, Warren Cli, is in Grade 6 and he played in our exhibition games and he did really well. He certainly impressed the crowd, they were ‘oohing’ and ‘ahhing’ because he was so small playing against these really tall guys who were 6’8”, 6’9”, and he’s only maybe 5 feet,” Barry said.

“Our two Grade 8s, Bryce Hardisty-Phillips and Zehro’h Waugh, also played really well the whole tournament. They handled the pressure really well and I’m really excited to think about how they’ll be in future years.”

An inspiring glimpse into the future

The NABI Foundation – which hosts the annual tournament – provides not only athletic opportunities to indigenous youth, but also a window into their scholastic possibilities.

“On registration day, there was an education fair where different colleges and universities from mostly the western United States came,” Barry said. “They were recruiting and explaining the programs to the kids; that was really good. They went around and learned about college and university, some of the stuff they needed to do to prepare and some of the opportunities and different programs that were out there, especially for First Nations youth.”

Some of the kids were palpably excited while touring through the fair, especially the boys heading into Grade 12, Barry noted.

Another source of inspiration came when the boys attended the championship games, held at the NBA Phoenix Suns’ home court in the US Airways Centre. In honour of the NWT’s fifth year representing Canada at the tournament, the team was invited to centre court to make a presentation to the NABI founders, gifting them with a Canadian Flag signed by all the players.

During the presentation, they met pro players including NABI co-founder and 17-season NBA veteran Mark West and A.C. Green, who holds the record for playing more consecutive games than any other player in NBA history.

The team also got the chance to shake hands and take pictures with Kenny Dobbs, a member of the Choctaw Nation who is internationally known as one of the world’s top dunkers.

With another NABI event under his belt, Barry said he is optimistic about the team’s future at the tournament.

“We’re a young team, so I kind of expected we’d have troubles. There were a lot of Grade 10s and it’s a 19-and-under tournament. I can take this team back over the next couple of years and I think, by the time they’re in Grade 12, they’ll be a lot stronger,” Barry said.