Renowned athletes to make a splash at Paddlefest 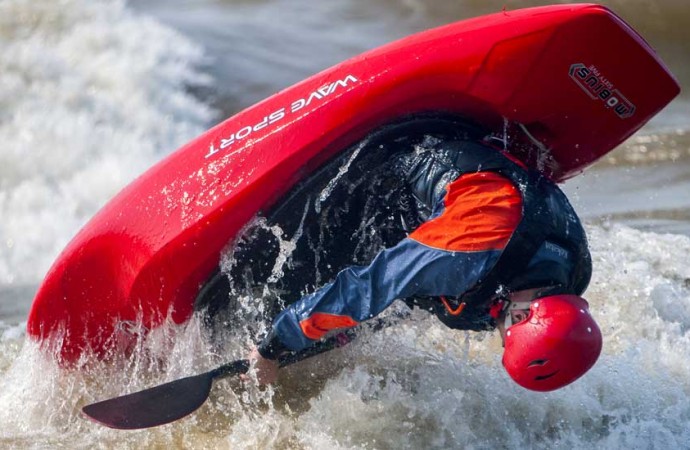 A kayaker plays on the waves at the 2014 Slave River Paddlefest. Paul Bannister.

Professional kayakers from around the world and novices alike are starting to trickle their way into the North to attend this year’s Paddlefest, Fort Smith’s annual August long weekend party on the Slave River.

With the 2015 World Freestyle Kayaking Championships taking place in Ottawa in late August, some paddlers are arriving early and deviating to the NWT for the chance to hit some of the best white water rapids on the planet.

“We have a few people that have been coming up to the Slave because they are going to the world’s after,” said Paddlefest coordinator Genevieve Côté. “It’s like, ‘Oh, well, now that I’m in Canada let’s just do a little bit more driving and get to Fort Smith.’ For the water, it’s really worth it because they can get good training up here.”

Even the most novice of paddlers will be able to appreciate the skills of the pros, Côté noted.

“Those guys have a lot of advanced races that we’ll be able to watch and they’re really hard,” she said.

The slalom races start on the Sunday morning of the festival at a set of waves known as the English Channel at the Pelican Rapids.

“There will be a guided hike for spectators to go and check it out,” Côté said. “There could be some carnage; hopefully not too much.”

So far, paddlers from as far away as New Zealand, Australia, Norway and the United States are registered to partake in the aquatic activities, along with about 65 other participants from the territory and Alberta.

“I’m expecting over 100 people this year,” Côté said. “We only had 80 last year because of fires; we lost about 50 people because the road was closed.”

Unfortunately, the pre-paddlefest youth lessons usually led by the Calgary-based kayaking business Aquabatics had to be cancelled this year due to injuries sustained by the instructors.

That said, Côté, remains upbeat about this year’s event. She said the festival has found its groove and organizers plan to follow last year’s recipe for yet another successful Paddlefest.

Ingredients include a dash of stand-up paddleboarding, a hunk of inflatable pool toy races, a smattering of kids’ games with Parks Canada and a dollop of community feasts at the Queen Elizabeth Campground, all topped off with a night of dancing at Saturday’s beach party at the Roaring Rapids Hall.

On top of providing two round-trip tickets from Fort Smith to Edmonton as prizes for the Paddlefest silent auction, Northwestern Air Lease will be offering discounted return flights for registered paddlers over the festival weekend. Yellowknifers will pay $199 one-way or $398 return, and those in Hay River will pay $105 for their return trip. There will also be sight-seeing flyovers all weekend for $25.

With most of the organizing complete and the final few pieces of the festival falling into place, Côté is almost as calm as the flatwater on a windless day as she waits for Paddlefest weekend to arrive, give or take a few ripples.

“It’s been a crazy couple weeks but I feel pretty peaceful about it now,” she said. “I’m ready.”