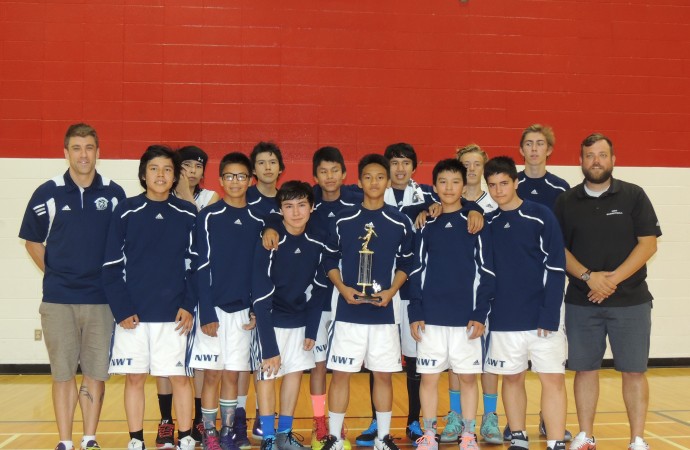 Team NWT players pose with their trophy after capturing the U15 championship game at the 2015 Calgary Storm Stampede Showdown tournament on July 5.Photo: Aaron Wells.

While thousands of tourists donned their 10-gallon hats and spurs to attend the annual Calgary Stampede, another contingent came prepared with their sneakers and A-game to compete in the Calgary Storm’s Stampede Showdown basketball tournament.

This year, 12 boys from the NWT dominated the annual event, taking first place in the boys’ U15 division after a series of hard-fought games from July 3 to 5.

“To be honest, I didn’t quite know what to expect going into it,” said coach Aaron Wells. “I’m pretty happy there’s so much talent in that age group here in the Territories but I mean, whenever you go down south, you don’t know what to expect because the talent pool is quite a bit bigger.”

Despite the odds, Wells had faith in his team.

“I knew that if they put everything together and competed hard they could have a chance of having some success down there,” he said. “I probably never thought of winning the whole thing.”

The boys fought hard for their success after getting off to a shaky start, losing a warm-up game by 17 points.

“We watched all of the game film from that exhibition game and I think that really helped the kids because from that moment on, something shifted in their attitude,” Wells said. “We never lost a game after that.”

In the first of their four tournament games, the boys won with a score of 60 to 52. After that, they took each of their games with nothing less than a 20-point lead.

“There were a couple plays in the second game where the help defence was incredible. If one guy was beat, their teammate was there to help them out, and I think that’s important in basketball,” Wells said.

“The teammates really connected and helped each other on defence and then some kids were hitting buzzer beaters, some kids were taking charges – things that you don’t often see in 14 year-old boys, but they were aggressive and strong on defence and weren’t afraid to sacrifice their body for the team.”

With a big win already under their belts, these players will get a second chance to shine this summer as they head to the WCSGs, set to be held in Fort McMurray from Aug. 7 to 16.