The Greek debt crisis is Canada’s too 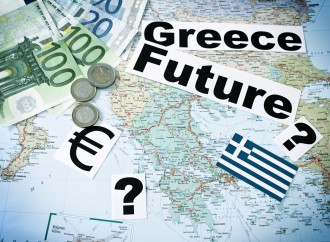 Greece defaulting on debt payments to international banks and the prospect of it being booted from the Eurozone is viewed as a “crisis”. Tremors have reverberated throughout world financial markets because many countries, including Canada, are like Greece, living far beyond their means, and all are interconnected.

The great fear of a Greek default is a fear of “contagion,” whereby Greece’s debts to other countries, with their own huge debt loads, might cause them to default as well. Italy, Spain and Portugal struggle with onerous burdens of debt. Ireland and Iceland have both been on financial death’s doorstep. Almost all members of the Eurozone seem addicted to overspending.

The United States, with over $16 trillion in debt, is one of the most vulnerable to any major international default. The causes of Greece’s malaise include spending a very large portion of its budget on armaments – second highest per capita in the world after the United States. Greece is also known for inefficient government and widespread corruption. The U.S. has its own corruption issues and is a divided country where legislative gridlock and government dysfunction are common. The symptoms of malaise found in Greece are very present in our giant neighbour to the south.

If the Harper Conservatives emerge with the greatest number of seats, but not a majority, look for a Liberal-NDP coalition.

In fact, very few countries are run well enough by their governments to post annual surpluses. Only six of the major economies worldwide can make that claim. Notable among them is Norway, a “socialist” country also known for an overflowing oil heritage fund worth over a trillion dollars.

Federal government debt in Canada has reached $614 billion, double what Greece owes. The Greek debt-to-GDP ratio (how much owed compared to how much we earned nationally) is over 155 per cent compared to 86 per cent in Canada. In Norway, it is 26 per cent.

Greece’s economy fell into recession in 2008 and never recovered, and now generates only $240 billion annually. Canada, which has three times the population, enjoys revenues of $1,787 billion, one fifth generated by natural resources.

A big concern in Canada is personal debt, compounding the federal government’s penchant for over-indulgence. The debt to income ratio of the average Canadian household is over 163 per cent.

The Canadian government recently pushed through legislation making it illegal for a federal government to run a deficit. Fiscal restraint is a fundamental Conservative philosophy and failure to live by that for over a decade has appalled many party members; yet overspending and deficits is, in part, what has defined their own government. The Harper Conservatives inherited a robust financial situation from the Liberals in 2006 and, within two years, the national budget fell into deficit and has continued that way each year since.

Under the Harper Conservatives, Canada has plunged into debt. The attempt to legislate themselves into fiscal responsibility was an obvious but weak pre-election ploy. The Harper government has set out great plans to acquire the very best new military equipment, including jet fighters and navy ships, and has made glowing promises of major new infrastructure developments, but so far has delivered little. Those commitments would add billions of dollars more to the deficit. It is hard to believe another Harper Conservative government, starting in 2016, would be better at exercising restraint.

Canadians who feel that the fiscal policies of the Harper Conservatives are only a brick in their wall of failures and want them replaced have two competing centrist parties to choose from. Liberal Justin Trudeau and former Liberal Thomas Mulcair are very close in their politics and philosophies. Mulcair was a member of the National Assembly in Quebec as a Liberal Party member for 13 years until he was elected an NDP Member of Parliament in Montreal in 2007. Under Mulcair, the NDP have moved closer to the centre and now little differentiates the two parties. Voters disaffected with the Harper Conservatives are watchful, trying to ascertain which of the two will be the best option. In the next three months as the election looms, many Canadians will be waiting to see if Trudeau or Mulcair screw up, or preferably, does something that inspires. Winner takes all.

Likely no one party will rise to the fore and be the victor in October, given the three-way tie in popular opinion. A minority government of some kind is more likely. If the Harper Conservatives emerge with the greatest number of seats, but not a majority, look for a Liberal-NDP coalition. Unlike the previous election where such a prospect was viewed with disdain, the feeling that Harper is bad for Canada is so strong within both parties that they will likely set aside their differences – and pride – to work together, albeit somewhat grudgingly. If a minority Conservative government is elected in October, an NDP-Liberal coalition will be very much in play.