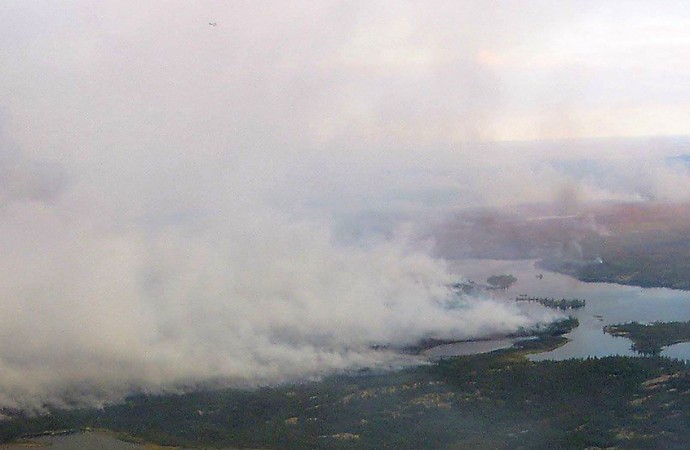 A fire near Reid Lake, located northeast of Yellowknife, forced the evacuation of a campground and cabin owners in early August.Photo courtesy of ENR.

Less costly but no less dangerous, the 2015 fire season is petering down at last.

Environment and Natural Resources Minister Michael Miltenberger said Friday, Aug. 28 that this season, kept alive by about 44 fires still burning across the Northwest Territories, feels like a sigh of relief after last year’s record-setting monster season.

“This year, we were able to not only take care of our business, but help out other jurisdictions as they helped us last year when our backs were against the wall,” he said. “Last year, we were stretched to the limit. We had help from every other jurisdiction in Canada and some states. This year, our fire season has been modest enough that we’ve been able to send some of our highly skilled folks down to the (northern) States where there are fires threatening close to the border.”

The big news of course is no news: no major loss of property, and no casualties. There was one close call in Hay River, where a few residents faced a fire “at the doorstep” and were evacuated briefly from their homes.

“I would be remiss not to point out how well-served we’ve been by the men and women who fight fires and put themselves in harm’s way to protect us during the fire season,” the Thebacha MLA said. “This year, the weather cooperated but they’re still here and doing their jobs.”

The fire season has cost $33 million and destroyed 662,000 hectares of forest so far, a far cry from the 3.4 million hectares lost and $60 million spent in 2014, but still the second-largest season on record. What’s worse, anything “saved” so to speak this fire season will be more than swallowed up by the $28 million-and-counting hydro shortfall mounting as the Territories’ parched rivers are too low to turn the turbines.

“So we have all these extra diesel costs (and) the broader issue of course is climate change,” he said. “In normal circumstances, precipitation falls in patterns you can count on, and there’s a certain range where the climate responds. That for the most part no longer exists so you never know what to expect and we’re all paying a big price. Fires start earlier, they burn hotter, they last longer and they move faster.”

Information on current fire conditions is available online at www.nwtfire.com/nwt-fire-map.