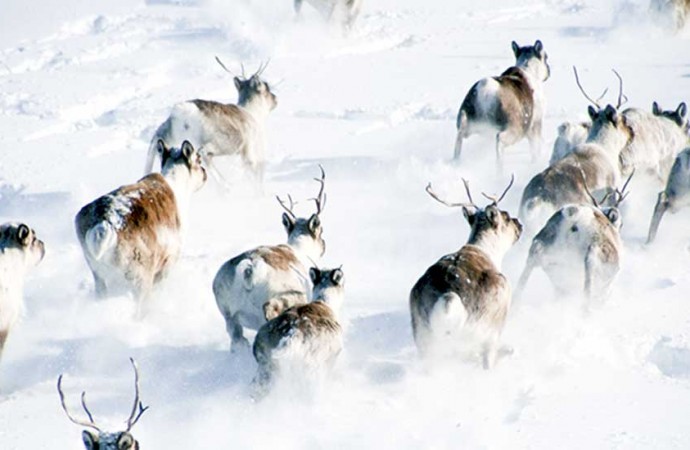 Preliminary calving ground survey results indicate further decline in the number of breeding females and a continued low rate of calf survival among the Bathurst and Bluenose-East barren ground herds.Photo courtesy of ENR/GNWT.

An update on barren ground caribou populations holds more bad news for herd management and harvesters in the NWT.

The initial results of the most recent calving ground survey, conducted by territorial officials with Environment and Natural Resources (ENR) in June, shows a decrease in the number of cows.

“The preliminary findings suggest further decreases in both herds compared to the 2012 (Bathurst) and 2013 (Bluenose-East) calving ground photo surveys,” states a letter sent out to renewable resource boards and ENR offices across the territory on July 9.

“This is consistent with other recent sources of information, and highlights the need for us to continue to work together on conservation measures for these herds.”

Though the final results of the survey are not yet available, the preliminary estimates indicate the proportion of breeding cows in relation to the rest of the herd dropped to 59 per cent this survey, compared to 68 per cent in 2009 and 2012, and 87 per cent in 2006.

The tally “suggests lower pregnancy rates and calving rates in 2015,” according to the document, and is an indicator “consistent with a declining natural trend.”

Calf survival also continues to be low, with fewer than 30 calves per 100 cows, a number that’s remained consistent since 2011.

The new estimates on breeding females will be available in the early fall, with numbers for the Bathurst expected in late September and the Bluenose-East in early November following a composition survey in October.

According to ENR, the surveys were done “at the peak of calving” with good weather and visibility, ensuring a “high level of confidence” in the coming survey results.

Both herds have been the subject of management actions since 2009. Last year, a total harvest ban was placed on the Bathurst outside of a mobile management zone, except for a small allowable harvest for First Nations’ ceremonial use.

Aboriginal harvesters of the Bluenose-East herd are currently bound by a limit of 1,800, divided among groups.

Both herds are off-limits to non-Aboriginal hunters.

Based on the preliminary results, those limits will stay in place during the upcoming hunting season.

“Management actions for both herds will need to be continued,” the report notes. “ENR, communities, Aboriginal governments and co-management boards need to work together.”