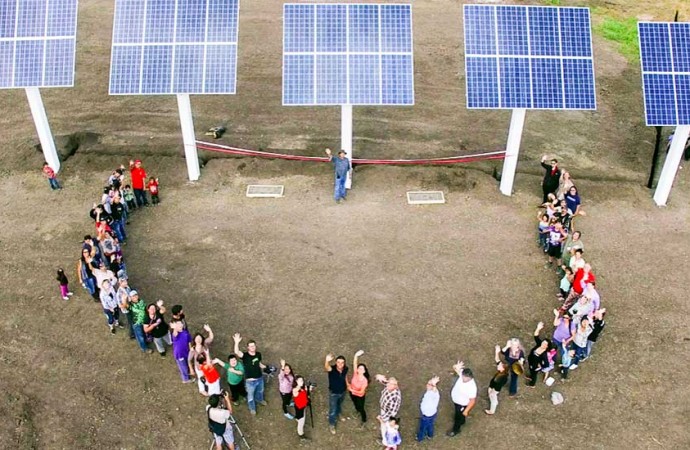 Melina Laboucan-Massimo said she isn’t sure she understood what it meant to cry tears of joy until she saw the dazzling array of solar panels in her home community of Little Buffalo.

A brand new 20.8 kW solar array got officially off the ground last week in the northern Alberta community of around 350, with 80 panels mounted on poles 15 feet in the air now powering the community’s new health and wellness centre.

A climate campaigner for Greenpeace and a member of the Lubicon Lake First Nation of Little Buffalo, Laboucan-Massimo has been researching renewable energy in First Nations communities for her master’s thesis, looking for solutions to fossil fuel dependency. 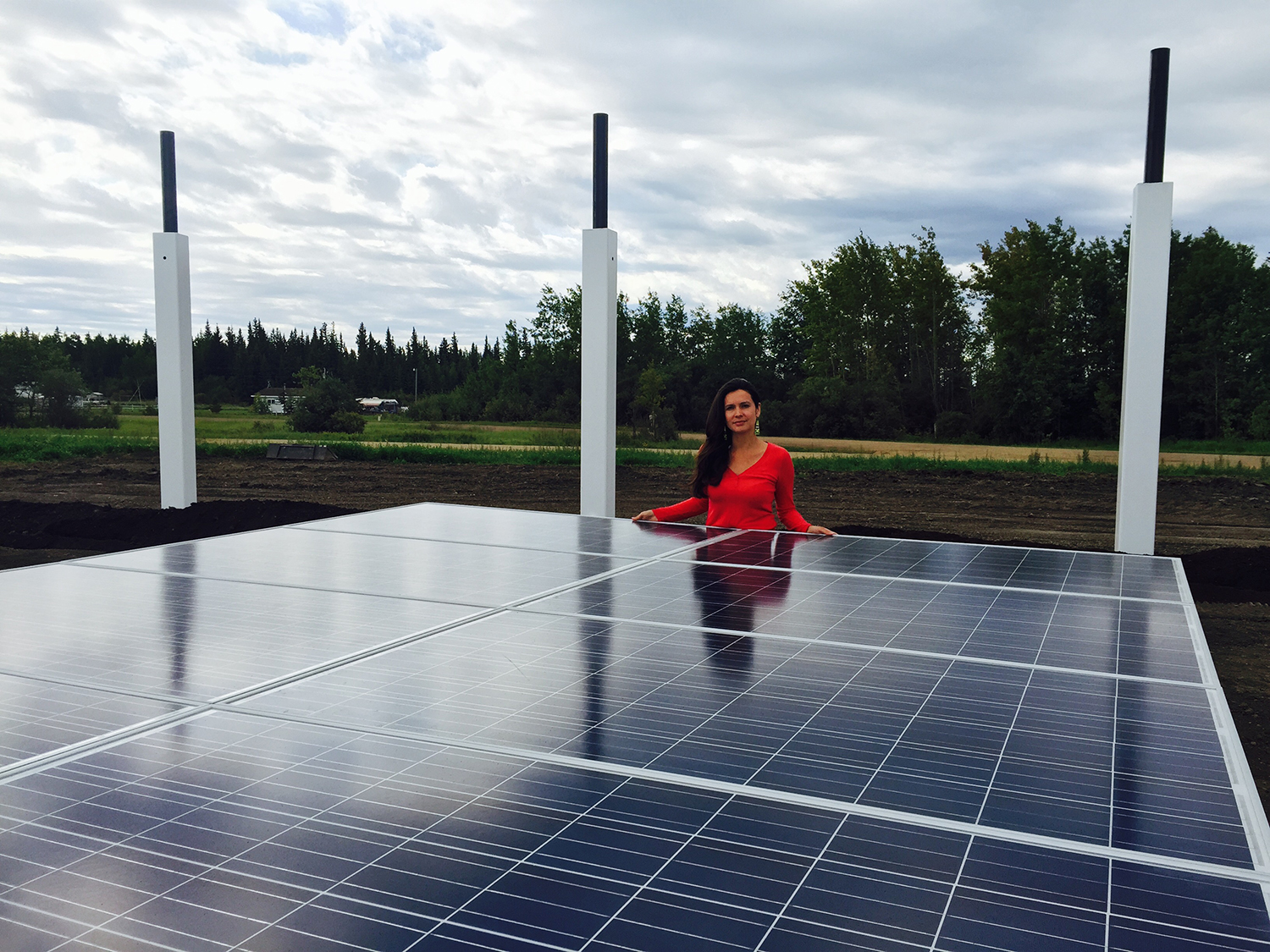 “After campaigning on resource extraction for the last decade or so and really seeing the problems that we’re dealing with but not seeing really any tangible solutions we can implement in our communities… I thought, why aren’t we using solar as a solution to resource extraction and climate change, but also producing local energy?” she said, noting that Alberta has one of the highest solar potentials in the country.

Laboucan-Massimo said it was important for her to focus on bringing solar to the community, considering its history dealing with the impacts of oil and gas development. Little Buffalo, located in the heart of the Peace River oilsands area, was victim to a massive pipeline spill in the spring of 2011, when 28,000 barrels of oil leaked from a rupture in Plains Midstream’s Rainbow Pipeline system just 10 kilometres from the community.

“I think a lot of people talk about the solutions, but implementation has not been something that’s happening. So I just really wanted to see solar go up in the tar sands.”

The solar project began over a year ago after residents expressed interest at a community meeting. After that came the fundraising. Following some initial seed money secured from Bullfrog Power, the project received a grant through Honor the Earth and even garnered donations from actress and environmental activist Jane Fonda. Panels and inverters were also supplied at discount. 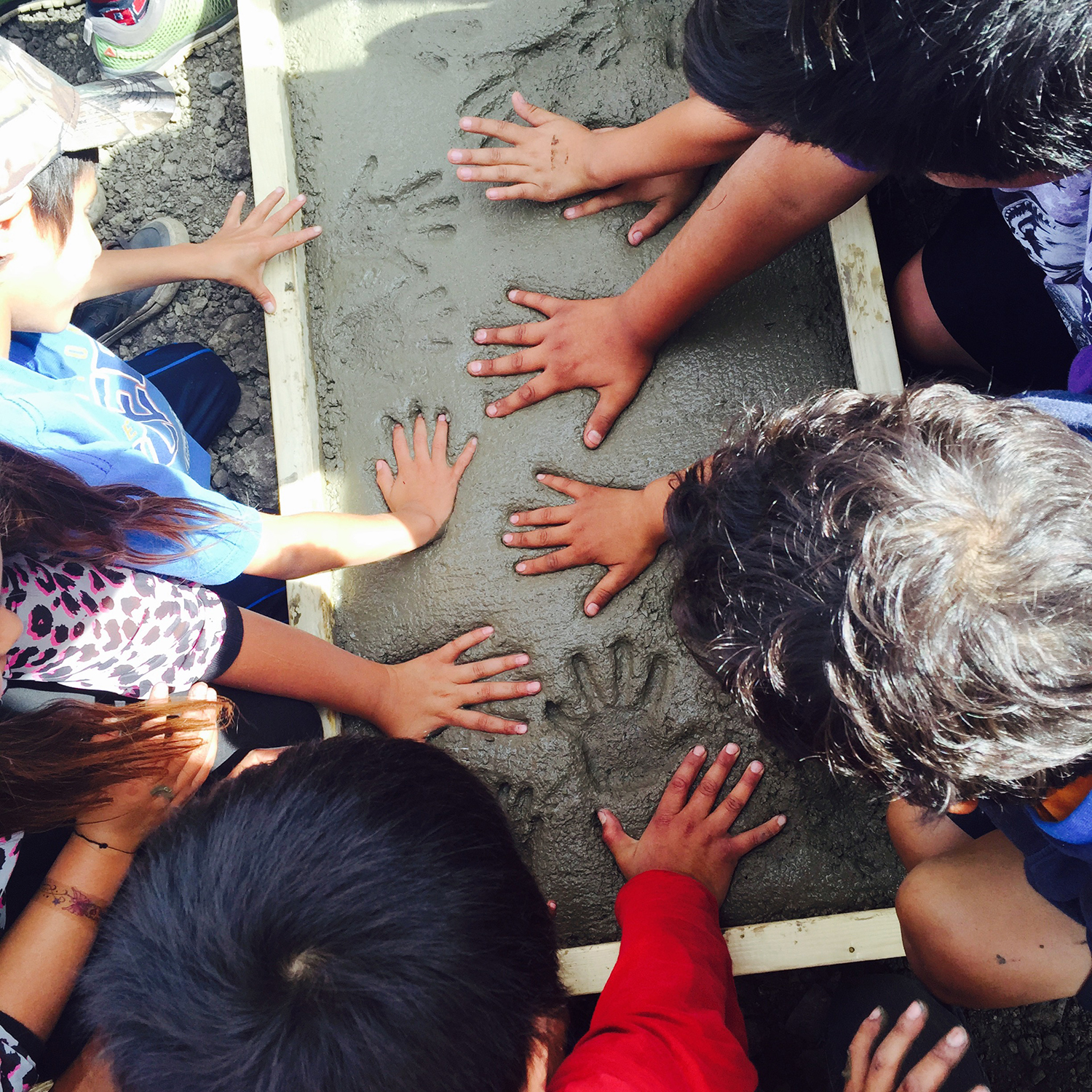 Little Buffalo youth at their handprints to the cement base of the poles where the solar panels are mounted.

Services were then donated in-kind to the community by David Isaac of W Dusk Energy Group in Vancouver, who worked with five to 15 members of the community each day to do the actual installation as a way to build local capacity.

“It was basically a hands-on experience for community members where we just hired as much locally in the community as we could to ensure that especially the young people were getting the training in what solar installation looks like,” Laboucan-Massimo said.

Apart from powering an important new facility in the community, Laboucan-Massimo said the array is meant as a demonstration project, to inspire residents of Little Buffalo and other northern First Nations to look further into renewables.

“My auntie, who’s in her 70s, when she came to the launch she said, ‘I never thought I’d see this in Little Buffalo. I’d always just seen it on TV.’ I think there’s just this idea that this is technology that’s far away from and not tangible in our communities,” she said. “That’s why I was really happy to put it up to give an example, especially for the young people and elders, to give inspiration that we don’t have to be dependent on fossil fuels… This could be your livelihood; your career.”

“We want to do a second phase in the future, hopefully in megawatt size, which would power the whole community so community members wouldn’t be spending hundreds of thousands each year on power.”

As soon as school is back in this fall, Laboucan-Massimo will also be presenting to students on solar power and what the installation the youth will pass every day on their way to class means for the community. Even the handprints of Little Buffalo youth are imprinted in the cement bases of the pole mounts.

“We have a warranty of 25 years and most of them last 30 years up to 50 years, so these panels are really going to be there until they’re adults,” she said. “They’ve seen them go up and that’s going to be producing energy for the community until that long, maybe longer, when a lot of the oil companies are gone.”