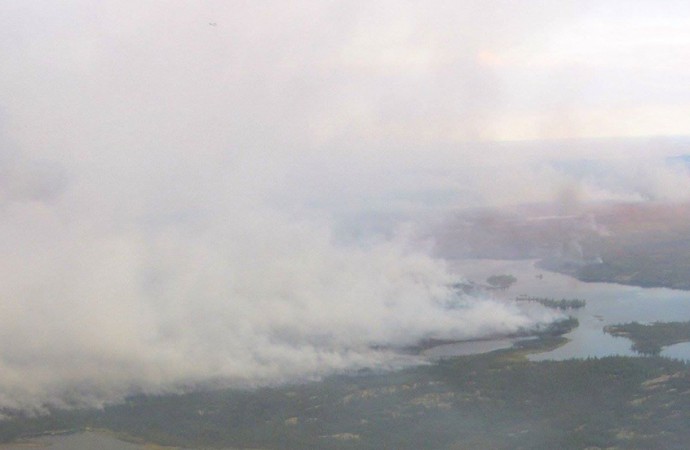 Fire ZF-014 near Reid Lake, about 50 km from Yellowknife, caused several evacuations and closed parts of the Ingraham Trail last week as it grew from 20,000 to 32,000 hectares. Photo courtesy of ENR.

Firefighters battling a blaze near Reid Lake were finally able to start calming the fire over the weekend after it wreaked havoc in the North Slave area early last week.

Fire ZF-014, located about 50 km outside of Yellowknife, began expanding last Tuesday, prompting officials to evacuate the nearby Reid Lake campground on Aug. 5 in order to conduct fire management operations.

At the same time, the department of Municipal and Community Affairs (MACA) began calling for the voluntary evacuation of cabins around Pickerel Lake. Luckily, operations have been successful so far and no values-at-risk have been damaged.

“We have about 100 personnel and command center at Reid Lake Campground,” said Environment and Natural Resources spokesperson Judy McLinton on Monday. “Personnel include an incident management team, 16 crews and a values at risk protection unit. Four of those crews arrived from Alberta last night to assist with suppression efforts. There are also seven helicopters working the fire as well as support from air tankers.”

The original fire originated near Harding Lake at the end of June. Last week, flames covered 20,000 hectares, but by Monday morning the fire had spread to more than 32,000 hectares.

On Aug. 7, the fire jumped across Highway 4, the Ingraham Trail, forcing closures from Tibbitt Lake to Cameron River, including the Cameron River day use area.

As of press time Monday, the road remained closed from Powder Point to Tibbitt Lake and will remain so until further notice.

Two crews remained at Little Pickerel Lake on the south end to mop up the fire. Additionally, several burnout operations are planned to head east from Defeat and Harding Lakes, with the intention of confining the fire to the small lakes in the area.

Clean up operations and direct attacks on the west flank of the fire near, Defeat Lake and on the north end of Reid Lake, are still in effect, with values-at-risk protection remaining in place at Defeat, Peninsula and Tibbitt Lakes.

“Fire behaviour remains extreme because of the hot, dry and windy conditions,” McLinton said. “The fire is burning deep, which makes mop up difficult. The North Slave Region, and particularly the Yellowknife region, is very dry as there has been only about 20 to 22 mm of rain so far this summer. The region has been experiencing hot, dry and windy weather for more than a week.”

Crews were blessed with a sprinkle of rain Monday morning, aiding in their efforts.

The campground and day use area will continue to remain closed until further notice, as fire management operations are carried out. Those who wish to cancel a booking have been given the option to do so without penalty for the period of August 5-14. Refunds for extended stay campsite holders will be provided at a prorated daily rate once the park re-opens.