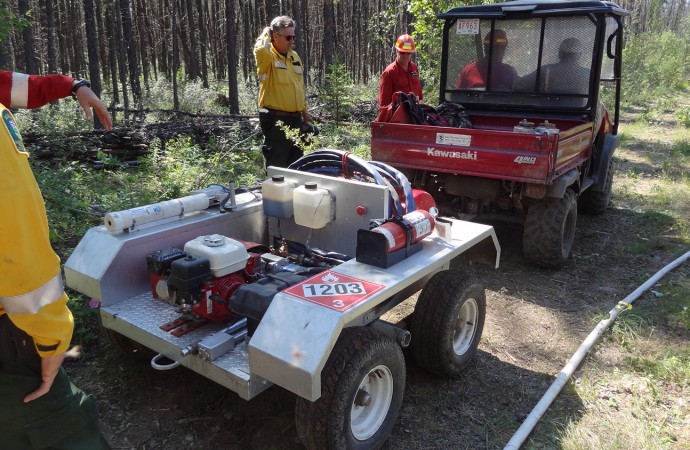 Researchers use a mounted Dackermin Torch to ignite a controlled fire on the Canadian Boreal Community FireSmart project site near Fort Providence, to test out new fire shelters. Photo courtesy of GNWT/ENR.

Engineers and researchers from NASA teamed up with American, Canadian and British partners earlier this summer to test out a new line of fire shelters that use space technology to keep firefighters safe on the ground.

Through late June and into early August, the team stationed itself at the Canadian Boreal Community FireSmart project (CBCFS) camp just north of Fort Providence, where as many as eight of the new shelters were subjected to testing through a man-made fire ignited by a trailer-mounted Dackermin Torch.

According to NASA documents, the fire shelters, called CHIEFS (Convective Heating Improvement for Emergency Fire Shelters), are a joint mission between the NASA Langley Research Centre and the USDA Forest Service. They use materials drawn from a new flexible heat shield NASA is developing for future planetary exploration missions, including an outer layer consisting of a woven quartz fabric bonded to an aluminium film.

“The one that’s in service today is something called the New Generation shelter,” said University of Alberta adjunct professor Mark Ackerman, who has been playing with fire professionally for decades. “It’s a composite; it has two layers to it. The outer layer is a silica cloth and aluminum foil and the inner layer is fibreglass and foil. That’s the one that the U.S. fire service carries today; there’s about 200,000 of them out there.”

While the current shelters have saved some lives, they are not impenetrable to the forces of wildfires. In 2013, a group of 19 firefighters perished in an Arizona wildfire when their shelters – a last-ditch attempt at survival – couldn’t stand the heat.

“Because of the materials we use, the outer skin is invariably aluminium foil,” Ackerman said. “It is an incredibly good reflector of thermal radiation. The trouble with it is it has a melting point that’s lower than the gas temperatures inside a fire, which can reach 800 to 900C. It lasts for a while but eventually it softens, melts and the winds take it away.”

NASA researchers got wind of the tragedy and offered their services, with the hopes of molding existing space technology to help those on Earth.

Ackerman was limited in what information he could share regarding the results of the testing, but said there were some improvements from the older tents.

“They were better than the new generation fire shelter, but I’m still not sure that the conditions inside were survivable,” he said.

Researchers will be returning North in September for more follow-up tests.

The CHIEFS tents can only be used once, surviving exposure to flames for 1.5 to three minutes, depending on weather conditions. They weigh as much as a gallon of milk and are big enough for a single person to kneel in, in an effort to combat issues of weight and bulk.

Should the outcomes of follow-up tests satisfy the researchers, NASA and the USDA Forest Service plan to release the shelters for use by firefighters as soon as 2017.

Not used in Canada

Currently, many Canadian wildfire services do not use the shelters, choosing instead to train staff on the ground to keep themselves out of harm’s way.

“They’re a last-ditch resource,” said Larry Nixon, a fire science manager with ENR. “The site where we do the burns is good for testing because the soil is actually fairly thin there, but a lot of the sites we use up here – if you’re out on the peat and whatnot – if it’s really dry and you’ve got a lot of organics underneath you, it’ll just come along and burn underneath. It kind of defeats the purpose.”

He noted that high costs – about $300-$400 per unit – and the extra weight of carrying the shelters also makes them impractical in the field.

“We’d just rather keep our crews out of danger,” he said.

That said, Nixon appreciated the chance to work with the NASA researchers.

“It’s a great opportunity for our crews to learn more about fire behaviour,” he said.

Two fire crews from Fort Providence were privy to the NASA studies, along with a host of other groups carrying out their own research on the use of solid stick fire retardant applicators instead of foam; measuring spotting distances for fire embers; testing fire resistant cameras and sensors; and measuring carbon and gas emissions from the fires.