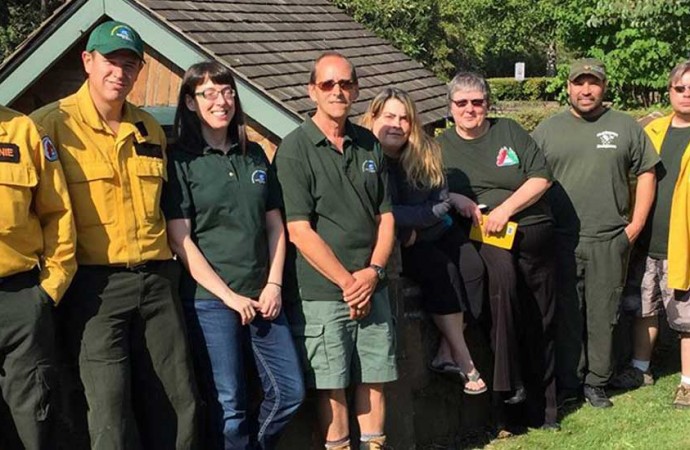 A crew of 12 staff members were exported from the NWT to Oregon last week, to assist with operations in the state. Photo courtesy of ENR.

With fire season winding down in the Northwest Territories, the government has supplied a team of overhead staff and an air tanker to aid in the fight against wildfires in Oregon.

Twelve personnel left last Monday to assist crews in the northwestern state, where the massive Stouts Fire had communities on evacuation warning early last week. Over 1,200 firefighters are working on the blaze that is now over 22,501 acres and compromising air quality in several nearby towns.

The exported NWT crew members include two radio operators, one timekeeper, two divisional supervisors, one fire observer, two facilities unit supervisors, one air operations branch director, an Electra air tanker group and air attack officer, and one agency representative who will be gone for up to 19 days.

“This exchange is happening through a northwest compact agreement that we have,” said Mike Gravel, manager of forest management services with Environment and Natural Resources (ENR). “It includes the western provinces and territories…Alaska, Oregon, Idaho. We have agreements to exchange personnel when the time requires it.”

It’s the first time the territory has been able to share staff since 2012, an indicator that the fire situation has become “fairly quiet” over the last several weeks with cooler temperatures and rain over much of the NWT. Already, the territorial government has retired some of its crews for the summer.

But even with things settling in the NWT, Gravel said the territory cannot afford to share any more resources with a month left to go in the season.

The City of Yellowknife announced a fire ban on Aug. 4 for all open pit fires within the city, but thanks to rainfall over the weekend, the bans were officially lifted on Aug. 10.

An air quality alert was issued for the city last week due to surrounding fires. Along with reduced visibility due to smoke, residents were warned that poor air quality could cause high health risk conditions. Residents were advised to reduce strenuous outdoor activities until air quality improved.

There have been 231 fires to date this year. Apart from the Reid Lake fire, the remaining fires in the territory are just being monitored, but that could change with hot temperatures and easterly winds expected to grow in force over the next week.

“The forecast does not look favourable,” Gravel said. “The relative humidity is going down and the winds are primarily from the east-southeast and picking up in strength.”

Use of extra caution urged

Highway 3 from Fort Providence to Behchoko was closed all day on Aug. 7 to allow for fire suppression operations.

The next day, ENR announced two new fires had been ignited in the area.

One was naturally occurring, started by a lightning bolt about 78 km from Behchoko.

The other, fire SS-079 about 14 km from Fort Providence, was man-made and thought to be caused by a discarded cigarette or tobacco product. The fire received limited action and was quickly extinguished.

However, the incident has prompted officials to advise people to use extra caution and to avoid using fire at all if possible.