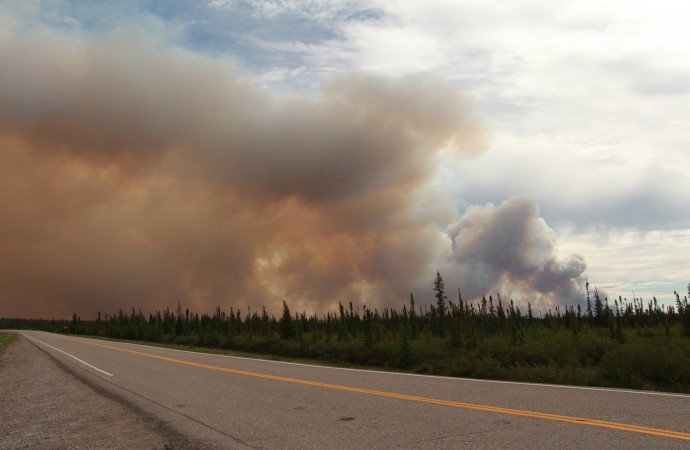 Fighting forest fires is expensive business and, from the way drought conditions and climate change seem to be heading, things may get much worse. But with so much money and effort invested in a defensive battle against Mother Nature, there must be a wiser way to manage those resources that also benefits communities in the long term.

Last year, the NWT government spent $55 million fighting forest fires and at least $30 million will be spent upgrading the engines on their fleet of water bombers. Both British Columbia and Saskatchewan spent over $100 million already this summer. The combined total across the country must be approaching $500 million. That money could build a lot of schools, highways and bridges, but it is a necessary cost of protecting people and property. Unfortunately, once the fire season is over, there is little to show for it.

Fire fighting is a massive industrial operation requiring vast resources. Helicopters and water bombers rack up huge costs. Fire crews and the food and shelter for them, plus their sophisticated gear, are very expensive. Heavy equipment needed for pushing fire guards through the forest comes at a premium price. Then there is the bureaucracy to support it all, sustained throughout the winter. Add up all those costs and there is likely a billion dollar national price tag each year.

The way it is done now, communities that obviously need a fireguard only get one in a crisis, when the cost is highest, time is short and there is no consideration of any other need.

Crews and resources have to be in a constant state of readiness throughout the summer. In situations where there are no fires, are there not other things that can be done using those crews and resources that aid in fire prevention and making communities less vulnerable? Could there not be a larger plan where efforts are implemented in ways that benefit communities?

The idea of applying fire resources elsewhere does not seem to be a consideration. They are there for one purpose – defence against wildfires – and that is all. That is limited thinking.

There should be wide-ranging planning each winter that identifies threat levels near communities, particularly old growth forested areas likely to burn, so at times when there is little risk of fire, crews that are otherwise idle could be productive. Bring in other government departments to contribute to the wintertime planning and those fireguards could be laid out in ways that double as needed road access or recreation trails. Communities could add supplemental resources to do the job even better. The way it is done now, communities that obviously need a fireguard only get one in a crisis, when the cost is highest, time is short and there is no consideration of any other need.

The situation in national parks is particularly strange. The fire protection service is distinct from the warden service, with separate bosses and separate ways of operating. You would think in a smaller contained unit like a national park there would be more inter-agency planning, but that happens little.

Federal parks, especially under the current national government, are allotted virtually no program money, but firefighting budgets are open-ended, even generous, when public infrastructure is threatened. The warden service cares about every blade of grass in every corner of the protected area to which they are dedicated. Any change or impact within a national park takes place only after lengthy study and consideration. When wildfires threaten, things change. Everyone reverts to crisis mode and decisions are based on expediency. Controlled burns that are not at all natural are common. Cat guards are pushed through with no thought of impact. What is perceived as necessary gets done quickly.

Whether it be a province, territory, region, national park or community, one would think that it would make sense with such a predictable annual threat to have inclusive planning sessions that look beyond the summer defence against nature. Rather, almost all decision-making is made in the moment under pressure.

The immediate side benefit to any such planning would be identifying vulnerabilities and planning ahead in every community, becoming both fire smart and fire ready as a routine. Taking advantage of resources that are otherwise idle while making our communities safer, done in a way that has lasting benefits, would require creative thinking, leadership and good management. Why can’t we get more of that?