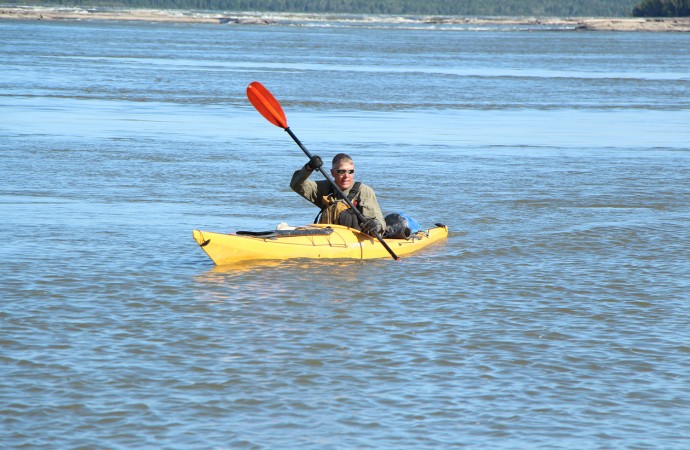 Bryan Brown, 59, has traded his life as a Wall Street financial advisor living in Beverly Hills, California this summer to paddle the entire confluence of the Mackenzie Watershed, from source to mouth.

A self-proclaimed outdoor enthusiast originally from Indiana, this will be Brown’s third trip navigating a major North American watershed. In the past, he has traversed the entire length of the Colorado and the Yukon Rivers and is hoping to break the Guinness world record for longest solo kayak descent.

On Aug. 1 as Brown passed through Fort Smith, he sat down with the Journal to talk about his most recent journey.

While he doesn’t see himself as a “bunny hugger,” as he called it, nor an eco-warrior, a strong desire to protect waterways has been a motivating factor for Brown on each of his trips.

“I am simply interested in big-picture issues related to water,” he said. “The U.S. has set the stage for the way the rest of the world potentially might manage an incredibly sensitive and scarce resource and we haven’t done it all right; it can be done better.”

Almost three months ago, Brown launched from Thutade Lake, British Columbia – the mouth of the Mackenzie watershed – before paddling through the Peace River Valley into Alberta and up through the Northwest Territories.

Along this route exists W.A.C. Bennett and Peace Canyon dams and, soon, the Site C dam, which recently received permits to be built near Fort St. John, B.C.

“I chose this watershed this year because it is unique (and) somewhat endangered, as are most big watersheds throughout the world,” Brown said. “Whatever happens in the Mackenzie as a result of the Site C dam is likely to happen elsewhere on Earth, and if we all pay close attention, we can manage the natural progression in, hopefully, a rational way.”

It was on a childhood family vacation to the Grand Canyon that Brown first realized he wanted to try long-distance rafting. At the time, he and his younger brother happened to be reading about John Wesley Powell, an explorer who made the journey along the length of the Colorado River in the late 1800s. Inspired as they peered over the caverns and into the river, the two boys vowed to make the same trip someday.

Tragedy struck when Brown’s brother was diagnosed with muscular dystrophy as a young man. Despite the news, Brown tasked his fellow adventurer-at-heart with mapping out a route along the Colorado; he wasn’t surprised to learn when his brother died in 2012 that he had kept his word.

When Brown finally took the trip in 2013, he saw first-hand the damage done to the river over centuries of industrial development. Water meters sat vandalized on the shores. Every so often, he would be forced to portage around the many dams along the waterway. He noted the lack of fish in many areas, including salmon and the endangered pikeminnow. Most shocking to Brown was the fact that the watershed now ends at the U.S.-Mexico border.

“You could throw a baseball from the American side and not hit a single drop,” he said.

By traveling along the Yukon and Mackenzie Rivers – both being primed for future development that will most certainly have an impact on the biological landscape of the regions – Brown hopes to create more awareness of the far-reaching nature of industrial impacts on waterways.

“We, as Americans, are ahead of you by one generation and the lessons that we have to teach are important ones,” Brown said. “This has to do with leap-frogging what’s happening (on the Colorado) and trying to apply this intermediate term case to the Yukon and the Mackenzie.”

In the future, he plans to write about each of his excursions, to share his first-hand experiences.

An American in the North

At last check-in on Aug. 19, Brown was holed up in Hay River following a series of rain storms in the South Slave.He has ru

n into some other troubles along his way. In B.C., he was stopped for an extra 20 days by morel mushroom pickers who believed him to be invading their turf.

In Fort Vermillion, he had some items stolen, including a pair of gloves and a gallon of iced tea.

But aside from these unfortunate occurrences, Brown said he had been overwhelmed by the kindness of the Canadians he’s met on his path.

By making an effort to protect what he deems as one of Canada’s greatest resources, Brown hopes to return the many favours.