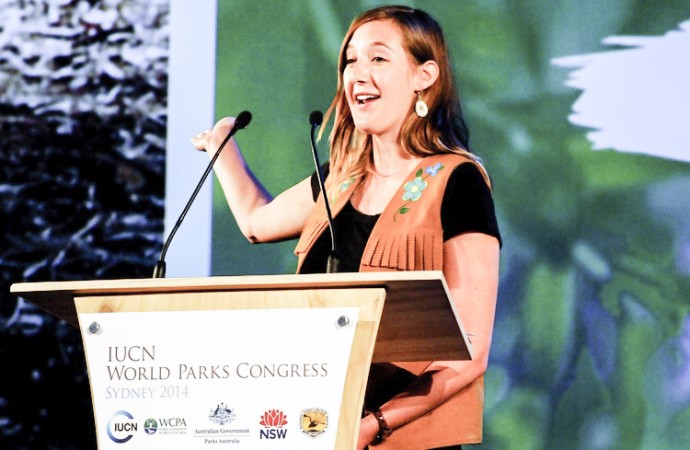 “If people spend time out on the land, to me, you can’t help but care about it.” So said Chloe Dragon Smith, 25, an optimistic Yellowknifer striving to share her passion for the outdoors with young Canadians from coast to coast to coast.

Recently, Dragon Smith graduated with a bachelor’s degree in earth and oceans sciences. Soon after, she took a position as the youth co-chair of Connecting Youth to Nature, a Parks Canada working group focused on ensuring children have an opportunity to grow their roots outdoors before they get too used to a contemporary wired lifestyle.

There is starting to be a lot of growing awareness on the fact we need to reconnect Canadians to nature. It’s been recognized that the best way to do that, or at least one of the best ways to do that, is to get youth involved when they’re really young, get them out on the land and spark a passion that will continue into adulthood.
—  Chloe Dragon Smith

“There’s been research coming out that’s showing kids are lacking in nature time,” Dragon Smith said. She made a reference to Richard Louv’s 2005 book Last Child in the Woods, which warns of the staggering divide between children and the outdoors and the negative impacts of such a relationship, including obesity, attention disorders and depression in the youngest demographic.

“There is starting to be a lot of growing awareness on the fact we need to reconnect Canadians to nature. It’s been recognized that the best way to do that, or at least one of the best ways to do that, is to get youth involved when they’re really young, get them out on the land and spark a passion that will continue into adulthood.”

Dragon Smith and her co-chair Eric Schoff, director for Parks Yukon, recruited members of the working group back in June. They have one year to develop their research, which will be recorded in a final report, Best Practices for Connecting Youth with Nature in Canada.

“We are a working group of 14 people, half youth aged 20-25 and half experienced professionals,” she said. “We’re brainstorming now. We’re going to be writing this document and we have full leeway on how we want to do it and what we want it to look like and what we want to have in it. Our strength as a group is we’re very diverse and it’s more of a citizen-based group. It’s not about Parks, it’s just about getting Canadians out into nature, which I think makes it really cool.”

Dragon Smith’s experiences make her well-suited to take on the initiative.

In addition to growing up participating in traditional on the land activities – like hunting with her fur-trapping grandmother Jane Dragon – she has spent summers working for the department of Environment and Natural Resources and leading expeditions for NARWAL Northern Adventures.

She has also been recognized nationally for her efforts. Earlier this year, Dragon Smith was named as one of the top 25 environmentalists under 25 by The Starfish, a publication with a focus on young people working to preserve the natural environment.

In November of last year, Dragon Smith was invited to travel abroad with her environmental connection initiatives.

She attended the International Union for Conservation of Nature’s World Parks Congress in Sydney, Australia, where she had the opportunity to share her knowledge from a northern Canadian perspective and network with over 6,000 international environmentalists.

“There were two really key messages I found that came out of the World Parks Congress, and they were about the importance of engaging youth and engaging indigenous people and cultures for the benefit of both the cultures and nature,” she said. “Those are the two most important things to me.”

Dragon Smith’s pathway to a career studying the environment and encouraging others to appreciate its gifts wasn’t intentional; moreso, she felt it was simply a natural fit.

“I was out on the land a lot and so I think that I was always really drawn to nature and studies about nature, so I didn’t really have to think too much about the degree I was going to do,” she said. “It felt really right to do something in the natural sciences, it just inspires me way more than anything I’d ever found in the past.”

As she grows into her career, Dragon Smith looks forward to planning even bigger projects and focusing her studies on the intersection between indigenous cultures and the environment.

For now though, she is happy encouraging others to simply get outside. Even when she isn’t on the clock for Parks, she enjoys taking people out to experience the wonders of nature. Most recently, she paddled the Slave river from Hay Camp to Fort Fitzgerald on a four-day canoe trip with Northern Youth Leadership in late July.

“I really just want people to be able to have some of the experiences and joy that I had as a kid,” she said. “I really think it makes a difference growing up on your perspectives and your self esteem and your sense of self. It’s so invaluable to me that I just want to be able to share it with other people.”