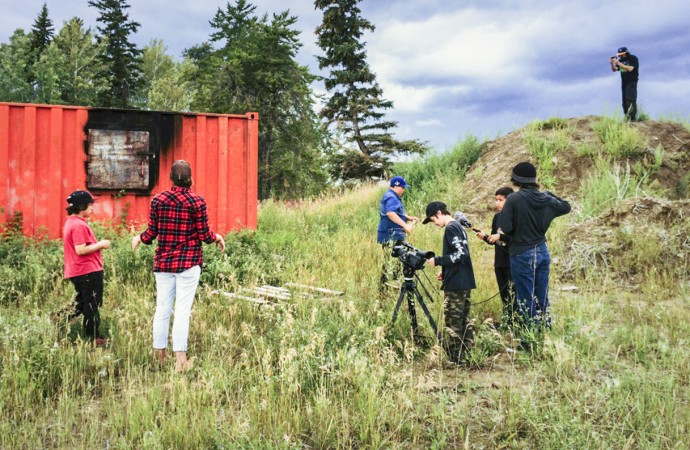 The YouthRise crew sets up a shot for their short slasher film at Old Bell Rock. Over the last month, the youth and their instructors have shot a wide variety of projects, all based on scripts the group worked on together. Photo courtesy of YouthRise.

From slasher films to mafia movies to music videos, the youth of Fort Smith have been busy translating stories from their imagination into content for the silver screen.

For the last month, the small group has been busy taking part in a series of YouthRise workshops, a program that teaches kids to explore their creativity through film, and for the first time this year, music.

YouthRise was started by local filmmaker Carla Ulrich last summer. After a successful first round, she was delighted to see her students double in number this year. With a bigger class to work with, Ulrich decided to take her lessons to the next level.

“This year is about writing, directing, producing and editing, whereas last year it was just filming,” Ulrich said.

To ensure the kids got the best education, Ulrich enlisted fellow filmmakers Jay Cardinal Villeneuve – who helped with last year’s workshops – and Damien Eagle Bear, a newcomer to the North this summer.

“It’s been great,” Eagle Bear said. “I love teaching filmmaking to the youth; it’s got its own challenges and it also reinforces and reminds me of what I’ve learned just through filmmaking. We all have these big crazy ideas and the kids are just full of them. When we were writing down the stories and pitching them all, one idea sparks another, sparks another, and then it just gets so big and hilarious and funny and it inspired me creatively too.”

Together, the squad worked on a handful of films, including the short Hickey Gone Wrong based on local author Richard Van Camp’s graphic novel of the same name. The group also came up with their own creative works, ranging from film trailers to public service announcements to short films.

In addition to the extras on their film crews, Ulrich harnessed the power of Fort Smith’s rock duo Veronica and Dave Johnny to run simultaneous songwriting workshops. While they weren’t working on their films, the youth sat in on sessions with The Johnnys to collaborate on the soundtrack for Hickey Gone Wrong.

“It’s been great, (The Johnnys) really know the people in the community,” Ulrich said. “They’re also very successful in their realm because they’re full-time musicians. Having that experience mixed in with what we’re trying to do has been so great. We’re relatively new and the biggest challenge for us has been trying to figure out how to deliver the best program, how to get the kids involved, how to find more money, how to work everything, how to schedule everything.”

A vision for the future

As the popularity of YouthRise expands, Ulrich hopes to eventually offer a wider variety of programming to the community.

“We want to try and do animation and eventually game design,” she said. She’d also like to bring dance classes, especially ballet, back to Fort Smith as an activity for kids throughout the year.

Until Ulrich’s goal comes to fruition, the kids have said they’re ready to use what they’ve learned to develop projects on their own time.

“This year it’s been a bit more work,” said Kole Laviolette, 11, a dedicated film student who participated in both summer sessions. “Last year after I did the workshops, I tried making films at home a couple of times, but we weren’t really doing the entire thing last year. This year, we’re actually making a movie from start to finish, doing scriptwriting and filming and everything. It’s been a blast working with them.”

Others have approached Ulrich and her team about bringing YouthRise workshops to other communities around the North, an exciting prospect for the young filmmaker. While flattered by the opportunity, Ulrich said her ultimate goal is to foster community through workshops, getting regions to access their own existing talent to bring exciting opportunities to local children.

“There’s people who are interested and, to me, it’s a no-brainer,” she said. “If I have the tools and I can give them the tools, why don’t we figure that out?”

To keep up-to-date with YouthRise and its upcoming events or to donate to the organization, head to http://www.gofundme.com/YouthRise.