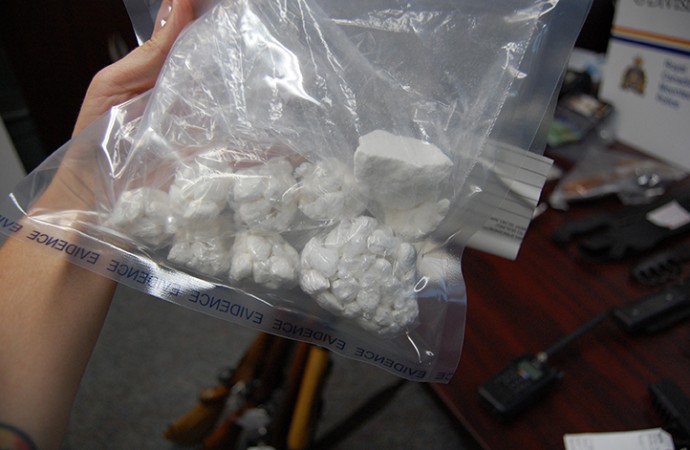 More than 100 rocks of cocaine were seized by police in Yellowknife last week.Photo courtesy of the RCMP.

Eight people, including seven Yellowknifers, have been charged with trafficking cocaine.

The charges stem from three separate drug warrants executed in the capital on Sept. 1.

Police haven’t tallied the total amount of cash and drugs seized, but said in a press release officers found more than 100 individually packaged rocks of cocaine and tens of thousands of dollars.

Police also seized several firearms including three that – along with an ammunition box and ammunition – were stolen during a recent break-in in Yellowknife.

Michael Wesley Lapierre, 38, Christopher Matthew Shave, 25, Todd Vatcher, 24, Michael Peter Beauchamp, 40, Lincoln Prescott, 24, Aimee Shermet, 32, and Matthew Seeton, 30, all of Yellowknife, were charged with trafficking cocaine, possession of cocaine for the purpose of trafficking, or both.

On Thursday the RCMP said they had charged Lapierre with possession of property obtained by crime in relation to the three guns, a Winchester 30-30, a Springfield .303 rifle and a Mauser.

Andrew Robert Hardy, 28 of Grande Prairie, Alta. was also charged with possession with intent to traffic.

Shermet was additionally charged with trafficking marijuana. Seeton is the only accused who faces charges of obstructing police and possession of the proceeds of crime.

None of the charges against any of the abovementioned individuals have been proven in court.

The investigation, which targeted a “known network” of drug traffickers, continues and the Mounties said they expect to lay more drug and weapons charges before they’re through.

“Today has been the result of many months of investigation and intelligence gathering by the G Division RCMP,” Sergeant Dean Riou said in the release.