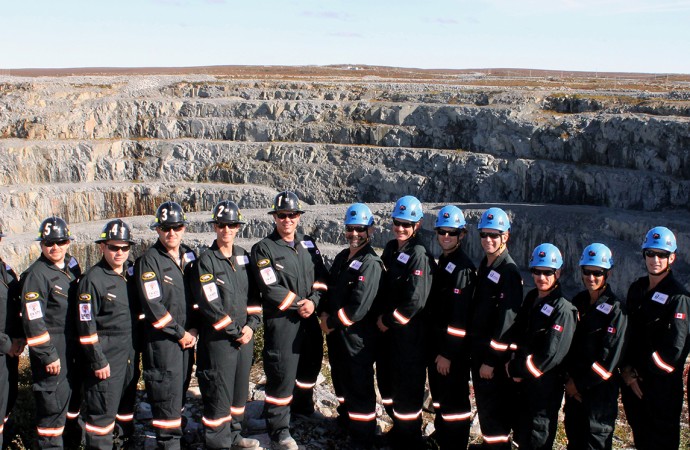 Heading underground for a shift of work is always underpinned with danger.

Now the miners at Dominion Diamond Corp.’s Ekati Mine can pass through the gates with a little more confidence knowing their emergency response team was named overall winner of the underground events at the 12th Biennial National Western Regional Mine Rescue Competition in Fernie, BC earlier this month.

“The ERT at the Ekati mine is a dedicated team of employees who put their lives on the line to protect our workforce during emergencies,” Dominion Diamond CEO Brendan Bell said in a press release. “These individuals volunteer and devote an extensive amount of time to the team, constantly expanding their skills and knowledge to handle real-life situations if called upon.”

The win earned the team an invitation to the Big Nickel to take part in the International Mine Rescue Competition next year in Sudbury.

The underground team came out on top with first-place finishes in four of the seven competitions, which included fire response, ropework and a written exam, winning the first overall championship in the team’s history.

The surface team also did well, finishing with their best-ever showing at the competition, which was founded in Fernie in 1993 to establish cooperation and support for mine rescue programs across the country, and to work towards standardized rescue training and procedures for underground and surface mining through competition.

“As a leader in the Canadian mining industry, Dominion has a responsibility to have robust emergency response and crisis management capabilities,” Bell said. “Our ERT members have continued to excel in this regard and have shown they have what it takes to get the job done.”