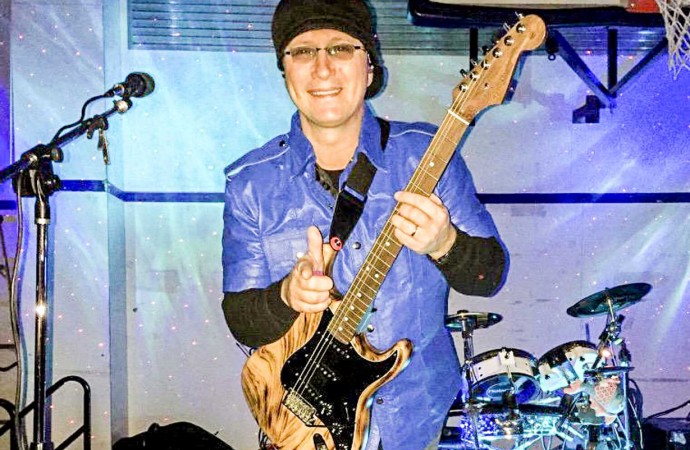 Welder’s Daughter guitarist Attila Novak holds his favourite axe, a numbered Fender Stratocaster prototype, in Fort Simpson Sept. 12. The guitar and about $10,000 of other gear was stolen from the town’s recreation centre overnight, found and returned in time for the show to go on.Photo courtesy of Welder’s Daughter.

A new legend for the North has emerged from Fort Simpson. The working title is The Welder’s Daughter and the Uncle of the Thief.

Welder’s Daughter, a longstanding Yellowknife band originally from Vancouver, rode a “rollercoaster” of emotions from the deepest valley to the highest mountaintop on Sept. 12, starting when they discovered that morning that about $10,000 worth of their gear had been stolen overnight.

“The hardest thing to deal with is that panic,” lead vocalist Karen Novak said. “You can’t believe it happened. Then we start thinking ‘how are we going to pull off this show?’”

Stolen from the Fort Simpson recreation centre were two electric guitars, a black Yamaha bass guitar, an iPad/Apple laptop combo the band uses in place of a mixing board and a myriad of other items including a microphone, headphones, memory cards and cables. The list grew as the veteran musicians took stock and set up what they could.

The guitars taken were special to the band. One was a numbered Fender Stratocaster prototype with a striking custom zebrawood finish, the other a white Fender Telecaster. The only thing taken from the drummer’s station was a flashlight that the band figured the culprits used to look around with.

“When Attila got his guitar back he literally hugged it,” Novak said. “It’s one of his favourites. You kind of hunt for your whole life for the instrument that makes your life easier, that is easier to play and sounds great. It’s a euphoric feeling when you find it. You have more fun and that feeling gets passed on to the audience.”

Shortly after Novak posted about the theft on a Fort Simpson Facebook page, the community mobilized, coordinating through text messages and physically combing the town.

“One lady was going through dumpsters because someone broke into the youth centre and stole an XBox and they found it in a dumpster,” Novak said. “People were looking in ditches and going through the woods. It was a huge effort that paid off (and) it never would have happened in southern Canada.”

Within 30 minutes of announcing the gear had been stolen, Lindsay Waugh, the emcee for the evening’s event had offered up four high-end guitars for the band to borrow.

By 5 p.m., the band’s gear had been recovered. Fort Simpson RCMP, which had called in the G Division forensic unit to help investigate, credited the community’s coordination over social media with cracking the case.

“A man just walked in holding two guitar cases and the iPad and said, ‘Are these your things? I found them in my nephew’s closet,’” Novak said. “So we told him what else was missing and they found out where the rest of the stuff was.”

They found the bass guitar stuffed under the stage at the recreation centre. The RCMP charged 18 year-old Stephan Sekaya Hardisty with one count each of break, enter and intent to commit theft over $5,000 and under $5,000 and one count of possession of break-in tools. A second adult male was diverted to community justice. The charges have not been proven in court.

“We felt so good doing the show that night,” Novak said. “We wanted to show how pleased we were and how much we appreciated the community’s help. We went a little into overtime, but it was OK. There was a lot of love in the room.”