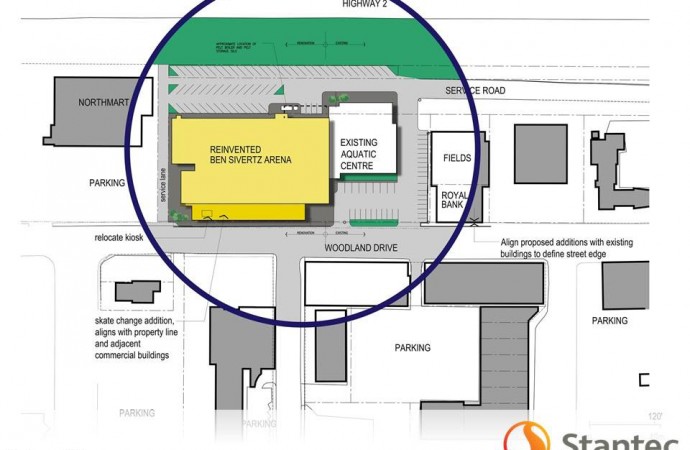 Plans for a new recreation centre in Hay River will go to a vote this fall.Illustration courtesy of the Town of Hay River.

Hay River residents will soon have their say on whether to borrow millions to revamp recreation in the town.

Mayor Andrew Cassidy said on Sept. 3 a plebiscite on the $20-million-or-so renovation to the town’s existing recreation complex, aging and piecemeal, is weeks away at most.

Council has agreed to work through the process as far as the vote, but to leave the decision whether to borrow a hefty sum up to the community.

“At the start of this term three years ago we said ‘before we get bogged down in the details, let’s ask does the arena need to be worked on?’ And all councillors said ‘yes,’” the mayor recalled, adding councillors began to deviate as more layers of information were added and the proposal became more complex.

Cassidy said the need for a new recreation centre to update and unify the existing facilities is general knowledge. The roof needs work, particularly over the curling rink. Each individual building is a different age, with different electrical and mechanical systems from its neighbours.

Firing up the ice plant for the skating rink is like opening a box of Forrest Gump’s chocolates every fall: technicians never know where the issues they have to correct, before the season starts in earnest, will appear.

The task ahead of the town is to finalize a more detailed business plan and schematics so everything is in place before the plebiscite. By leaving the decision to the voters, the town is putting itself in the shoes of an entrepreneur pitching to an investor, or more accurately, a couple of thousand of them.

One of the more interested investors is Harry Scheper, a coach with the Hay River Short Track Speed Skating Association.

As a regular patron of the rink, he understands a new facility is long overdue and as a speed skating coach, he would love a new rink that could fit an 111.12-metre Olympic-length track (occupying 60 by 30 metres, the same area as an international hockey rink) so his athletes are training in the same environment they’ll compete in, usually in Yellowknife.

He’s also involved with the curling club, and argued the plan to keep a three-sheet design is shortsighted. With four sheets, the club could host more tournaments, which would be a big boost to local business.

The current plan includes a “reinvented” Ben Sivertz Arena with a single hockey rink. Scheper says it’s tough to get ice time, but not quite tough enough to make the case for a second rink.

“We’re kind of on that cusp where two ice pads would probably be too much, but with one, we’re always fighting for ice time,” he said.

But as a taxpayer and longtime resident (19 years and counting), he said he’s loath to saddle the town with a debt that would almost certainly take more than a decade to repay.

“Everyone wants a Caddy, but we’ll have to settle for a sedan,” he said. “Everyone is strapped, the GNWT, and all of the communities, so as a taxpayer, I’ll want to hear more on how they’re going to fund it.”