New Order of the NWT shines with best and brightest 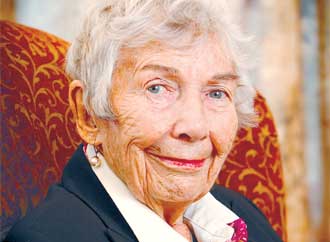 Longtime Yellowknifer Ruth Spence is part of the first class of inductees to the new Order of the Northwest Territories.Photo by Bill Braden.

Retired teacher Bruce Green is looking forward to being inducted into the Order of the Northwest Territories, if only to find out why he was nominated.

“I’m wondering myself,” he said from his Hay River home last week. “I was quite surprised, it’s a great honour to be recognized and to be one of the first recipients of this special award. I’ll be interested in reading what the nomination said.”

Modelled after the Order of Canada, a new merit award system takes precedent over any other honour the NWT can bestow. The first class of inductees were announced last week and will be honoured at a ceremony in Yellowknife Oct. 7.

They include Gino Pin and Ruth Spence of Yellowknife, Lucy Jackson of Fort Good Hope, Sonny MacDonald of Fort Smith and John Zoe of Behchoko.

“The first recipients of the Order of the Northwest Territories embody the spirit and intention of the Legislative Assembly when it established the Order,” honours committee chair Paul Delorey said. “They inspire all of us as Northerners to be the best we can be and to give back to our communities, regions, territory and country.”

A factsheet circulated hours after the nominees were announced indicates Green is being honoured for “his work in arts and culture, community leadership, education, environmental, science and technology, sports and recreation and volunteer services.”

Green taught for 27 years, 24 at the high school level at Diamond Jenness Secondary School, where he retired in 2002. He then spent several years teaching at the Chief Sunrise Adult Learning Centre on the K’atlodeechee Reserve.

Pin, an architect who has been “living, designing and building in Canada’s North for more than 35 years,” has received many design awards, including the CMHC 1994 Concept Design Award and was Up Here Magazine’s “Northerner of the Year” in 2002.

He was a recipient of a research grant in 1997 for the study of Native Northern Communities and is co-author of Health Housing in the North: Towards a Northern Health Housing Demonstration Project.

“His creative approach to all his projects make his finished products distinctive and recognizable, from the many houses throughout the North to large public projects such as the Legislative Assembly Building,” according to the GNWT.

Fellow Yellowknifer Spence was nominated as a community leader. She served for nearly 20 years as Executive Director of the YWCA, was elected to multiple terms on Yellowknife city council, was a member and chair of the Hospital Board, president of the Consumer’s Association of Canada NWT Branch and president of the NWT and Western Arctic Liberal Association.

“The “Y” under Mrs. Spence’s direction was able to establish summer day camps, day care centres and after school programs for children and provide a safe, caring and nurturing place for young women.”

Jackson was nominated for “her work in arts and culture, communications, community leadership, education, public service and volunteer services.”

“Mrs. Jackson is a dedicated member of the local church society, serves the public as a spiritual leader, traditional woman and North Slavey translator for local boards and organizations,” according to the GNWT. “She is known for her strong traditional knowledge, her belief in traditional lifestyles and dedication to her community. Most recently, Mrs. Jackson has been working on medical terminology for aboriginal languages with the department of Health and Social Services, Aboriginal Health and Community Wellness and is a Justice of the Peace.”

The self-taught Fort Smith carver MacDonald is also being recognized as an artist and community-builder.

Zoe is being recognized for his work in self-government and northern development. He became the Chief Negotiator for the Dogrib in 1992 to settle a Land Claim and Self Government Agreement through negotiations with the Government of Canada and the NWT. John B. is now a senior advisor for the Tlicho Government. He has an Honourary Doctor of Laws from the University of Alberta in recognition of his work in projects that are built upon a foundation of Tlicho language, culture and way of life.