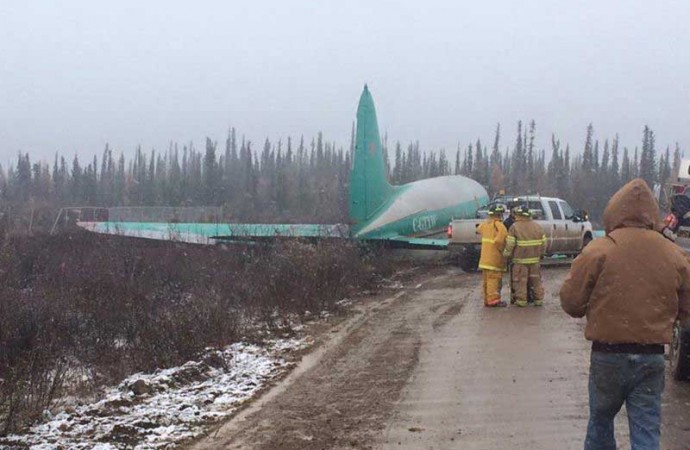 A Buffalo Airways Curtiss C-46 Commando airplane made a hard landing in Deline on Sept. 25. Four crew members were aboard the plane when it experienced engine failure and went down, all reportedly uninjured. The aircraft was loaded with cargo en route from Yellowknife to Norman Wells when it made the emergency landing, with its landing gear still up, around 12:30 p.m. The Transportation Safety Board of Canada (TSB) is looking into the incident.Photo: Bill Deluney/Facebook.

Man arrested for murder, attempted murder in Yellowknife
A Yellowknife man was arrested for murder and attempted murder after turning himself into police on Sept. 28. Police responded to a disturbance at a home on Lanky Court in Yellowknife just before 1 a.m. and found a man and woman, both critically injured. They were rushed to Stanton Territorial Hospital where the man was pronounced dead. The female was transported by medevac to an Alberta hospital. The suspect turned himself in later that morning. The investigation is ongoing and charges are pending.

North Slave morel haul expected to garner $4-5 million
The GNWT estimates the morel harvest in the North Slave and north of Fort Providence will fetch up to $5 million at market. The 60-day harvest season saw more than 280,000 pounds of morels picked in the region, according to government estimates. Harvest numbers for the rest of the South Slave and Dehcho regions are still being assessed. Many were sold on-site for up to $7 per pound; dried morels cost about $170/lb.

Caribou herds still declining: GNWT
A survey taken this summer shows barren-ground caribou herds in Bluenose East, Bluenose West, Bathurst, Cape Bathurst and Tuktoyaktuk Peninsula have dropped by as much as half since 2012, from 32,000 to between 16,000 and 22,000. In 1986, that figure was 470,000. “The GNWT continues to work collaboratively with all of its co-management partners on efforts to conserve barren-ground caribou herds,” said ENR Minister Michael Miltenberger. “This includes work to complete an inter-jurisdictional agreement with the Government of Nunavut to collaborate on research, monitoring and management actions for shared herds.”