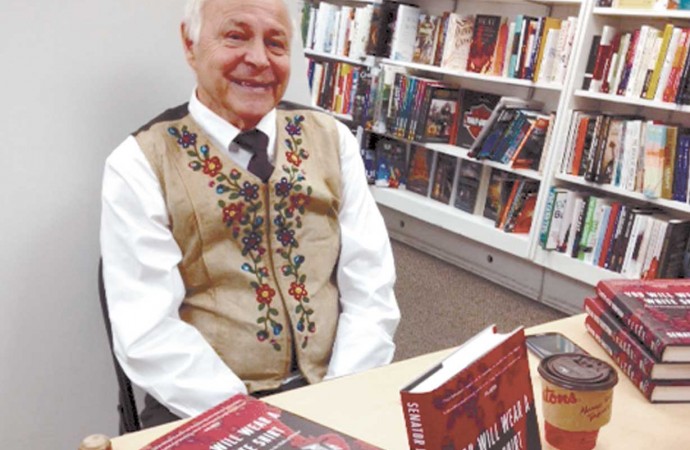 Growing up, Senator Nick Sibbeston’s mother always told him he would wear a white shirt.

“She had this idea that if I was educated and went to school that I wouldn’t have to work so hard and live the life of a hunter and trapper,” he said. “Those were encouraging words because it’s like a mother putting out hope that someday you’re going to be somebody, someday you could be somebody.”

The former premier, cabinet minister and MLA released his memoir, You Will Wear a White Shirt in Yellowknife on Sept. 21. The candid autobiography takes the reader back as far as 1943 – when Sibbeston was born to a single mother in Fort Simpson – through his experiences in residential school and his resulting healing journey, all the way to his time in the Senate.

“My hope is that every household in the North will have this book, if possible,” he said. “I really think there’s good information about the way life was in the early years and also the political development (within it). There’s been a lot of changes and I was part of that. I think it’s a good historical document, a good history about the government and society in the North.”

When his mother fell ill with tuberculosis, Sibbeston began attending residential schools across the territory, starting in Fort Providence and moving to Inuvik, Fort Smith and finally Yellowknife. Each school added a new layer to his story, some positive and formative like his time in Fort Smith, while others were much darker.

Eventually, he headed south to Alberta for university. After failing out, marrying his wife Karen and starting a family, Sibbeston decided to hit the books again, this time driven by the responsibilities of being a husband and father. From there, he would take on roles in municipal and territorial government, moving his way up the chain while attending law school and becoming one of Canada’s first Indigenous lawyers.

Sibbeston’s journey is a tale of lifelong learning and teaching. As a justice specialist for the GNWT, a public administrator for Deh Cho Health and Social Services and member of the Canadian Human Rights tribunal, he sought justice for those he represented by teaching incoming judges about the social realities impacting both Indigenous and non-Indigenous peoples. He had worked to address the abuses of residential school, which he felt first hand: substance abuse and depression that seemed to be passed through the generations; and families like his own, divided by illness and circumstance.

“Everything I’ve done, every aspect I’ve been trying to have people understand … I was trying to bridge the gap between the Dene and the social problems and the criminal court system,” he said. “My life in the Legislative Assembly, again, it wasn’t just simply a matter of being there, it was really trying to recognize the Dene languages and cultures and practices and trying to change a system of practices so it was more accommodating.”

Eventually, Sibbeston himself caved to his demons. Surrounded by a lifestyle of partying and boozing, feeling pressure from his career and experiencing depression and PTSD from past traumas, he fell into a trap of alcoholism and adulterous relationships to numb the pressure of being a forward-pushing politician and the pain of his past.

“I’ve had alcohol problems and stuff like that, but I went to AA and Adult Children of Alcoholics and I went through a whole lot of treatment,” he said. “When you’re on a healing journey, you don’t really care what people know because you feel so much better having taken steps to heal yourself.”

He credits his recovery to his family’s support, attending ongoing treatment therapies and comforts in the Catholic faith.

It was a conscious decision to write the memoir so candidly, Sibbeston said.

“It really exposes you. I felt wow, everybody knows about me now, my good parts and some of my bad parts,” he said. “Maybe that’s what makes it interesting. It’s not just a fairytale story of all the things I’ve accomplished. I’ve done a lot but it’s been at a terrible cost.”

By sharing his trials, tribulations and successes, the senator from the NWT hopes to encourage others to be all they can be, especially those in the youngest demographic.

“I would encourage people to get a good education, to really strive,” Sibbeston said. “There’s so many times along the way you could be discouraged and quit so I really encourage young people today to get educated and go all the way, right to the very top.”

Still a sitting senator, Sibbeston hinted this year may be his last, depending on who wins the upcoming federal election.