Take back the night, and the terror 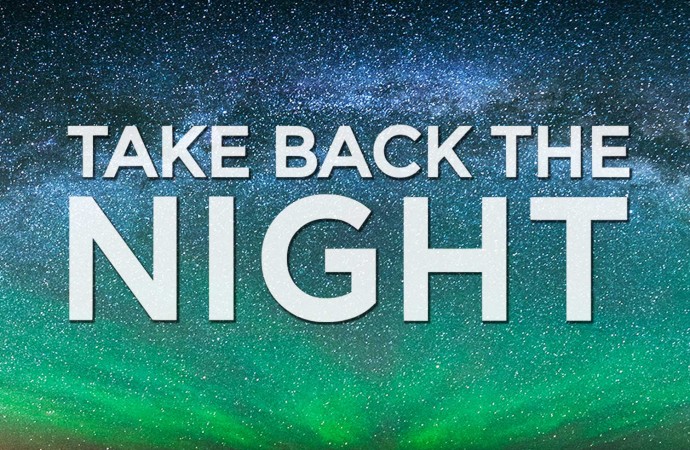 Courtesy of Status of Women Council of the NWT.

In the news this week is the large number of small communities in Northern Canada that have no resources to support women vulnerable to abuse from their mates; no “women’s shelters” where they can seek refuge with their children, or victim’s counsellor services to advise them of their rights or attend to them after they are beat on.

Sadly, domestic violence is common in our culture. Too many men, often under the influence of alcohol, threaten, coerce or physically abuse the women in their lives. It is inconceivable that this phenomenon thrives in our midst, is so apparent, yet so little is done about it.

This last week has featured the annual “Take Back the Night” marches. Groups of socially active women and a few sympathetic men gather once annually and march with placards declaring such things as “Women have the Right to Feel Safe.” After years of effort are things changing for the better, enough to turn that situation around? Not at all.

We say to all those women who march, who try to spread the word, who courageously show they care, that it is time to up the ante. Marches are not enough. The slogans have been seen so many times they are ignored. Get more people involved. Get men engaged, en masse. Force the issue. Make change happen.

The threat of terrorism, stopping anyone who wants to infiltrate Canada and bring their fight to us, is a current priority of our government and dedicated, even fervent political will is focused on it. As a result, considerable money and resources are focused on finding solutions. Half the citizens of our country, meanwhile, routinely face the potential of violence throughout their lives – essentially terrorism. Women must constantly fear for their personal safety. The statistics on violence against women – from all walks of life in all locations – are appalling. That is only part of it. What happens in some homes, when a woman suffers at the hands of an abusive mate who holds power over her, is a whole other layer. In spite of that, violence against women is not a government priority.

Note that Canada’s federal leaders have not had a debate on women’s issues since 1984. The situation will never change if there is no dialogue at the highest level of politics.

It is all about misogyny in one form or another – ingrained prejudice against women that manifests in ugly ways – the norm in our society. It is about one person having power over another human being. Because such behaviour is so common it is acceptable.

There is a sickness in our society at the base of this. It is in our schools and playgrounds, in music and literature and movies, influencing youth as they grow up. Yet while it is pervasive and obvious, it is generally accepted and all but ignored.

There is an effort in some schools to turn the situation around. New programs are offered where students are shown at an early age to respect one another, to be caring individuals and never to harm others. That is a good message any time. Our world – all aspects of it – will be a better place if that messaging is ingrained. In the NWT there is FOXY (Fostering Open eXpression among Youth), a home-grown organization that empowers young women to embrace their individuality and sexuality in a safe manner. A similar program for boys will soon be introduced and the programming is set to expand into Nunavut and the Yukon in the near future. Initiatives like those are important for change through education.

They are not enough. There has to be stronger political will plus a broad social effort that is compelling and all encompassing, if there is to be a serious and lasting change.

No one human is better than another, nor should anyone hold sway over another’s life, threaten them or do them harm. Those basic tenets should be true for everyone – and yes, that includes women too. That should be obvious, but it is not.

What is needed is a campaign like the one against smoking, compelling as that has been, complete with images of black, poisoned lungs and dire warnings or consequences on cigarette packs. Smoking has not been completely eradicated, but it was dramatically pushed back. That amazing success is a demonstration of what can be done for a just or worthwhile cause, if there is sufficient commitment and serious long-term action.

There are many ways the system could be improved to protect women against violence, in their homes and on the streets. The first step, as in all challenges, is to figure out why it happens. What is the cause of violence against women? What are the origins of negative attitudes, how are they learned, at what age do they start and what type of people are susceptible? Then the counter campaign must be mounted, and it must be formidable.