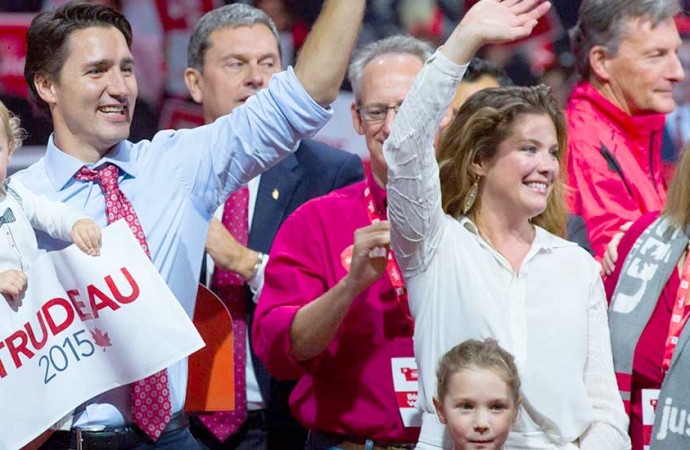 Photo courtesy of the the Liberal Party of Canada website.https://www.liberal.ca/

Who would have thought a woman who is a francophone media personality, television entertainment reporter, yoga instructor and mother of three might become the champion for the causes of indigenous Canadians, particularly the grave circumstance of missing and murdered indigenous women; but that is likely now that Sophie Grégoire has become the first lady of Canada.

Poised, self-possessed and spirited, she is a trained, experienced journalist and also studied commerce, but in her youth was afflicted with what she publicly acknowledges was mental illness and addiction. She is now a formidable fighter for a variety of causes including women’s rights around the world and is a strong proponent of resolving the many issues that face First Nation, Inuit and Métis Canadians. Her husband, the new prime minister, has promised that the issues of indigenous Canadians will be a priority but he will be a busy man in the coming months, fixing the economy and reshaping Canada’s image at the upcoming climate change conference in Paris, not to mention re-configuring the national government. It is usual for first ladies to take on a cause. Grégoire has the power and desire, plus there are a record 10 indigenous MPs (eight Liberal, two NDP) to work with, to finally resolve the burden of shame that plagues Canada.

Except for the Conservative core of 30 per cent of the population, most Canadians wanted a change of government in order to return Canada to what it was prior to the last decade – a caring, positive country that led the world in causes of justice, equality and peace. The NDP and Liberals, both liberal democratic parties with similar policies and solutions, had an equal shot at delivering that solution. Canadians were fortunate to have the luxury of two options and a record 78-day long campaign in which to make up their minds. Which one would be the better choice? It mainly came down to leadership. Justin Trudeau’s charismatic promise of hope resonated, striking an emotional chord across the country.

Two issues were critical in Trudeau’s win in this watershed election and will also likely be the toughest challenges for the new government. The senate was Stephen Harper’s Achilles heel. The scandal with Mike Duffy and other ills of the Senate plagued Harper throughout the early stages of the campaign, setting the tone for the rest of it. Harper championed a reformed, elected Senate long before he became prime minister, but he never acted on it. Instead, he created a partisan Conservative majority in the upper house and rendered it redundant. Thomas Mulcair’s solution was to eliminate the Senate completely, but although Canadians wanted a wholesale change in the ruling party, they are leery of the idea of dismantling parts of government and the quagmire of constitutional wrangling that would certainly result. Further, the upper house is there for a reason and Mulcair did not propose an alternative. The only ray of hope in repairing the broken Senate came from Trudeau. He eliminated partisanship on his side by cutting loose Liberal senators from his caucus. Partisan politics fracture the House of Commons, too. Get rid of the bitter rivalries by changing the way things are done and all aspects of Canadian government could improve. Trudeau was on to a possible solution, but it needs a lot of work on all sides to succeed.

Another key issue was the need for action on aging infrastructure across the country. That had been at the back of the minds of Canadians for a long time. From chunks of concrete falling from overpasses in Montreal to rotting sewer pipes in small towns, every community and every urban centre in Canada has serious infrastructure problems. Fixing things like that creates jobs. Committing to going into deficit to improve infrastructure was a courageous gamble, but what Canadians like as much as courage is sensible solutions, and right now the economy needs stimulus, not restraint, to get it going. Again, Trudeau demonstrated smart politics.

To be the best on the world stage, which is what Canadians want, we also have to be forward looking. Traditionally Liberal governments in Canada straddle the middle and “borrow from the left while governing from the right.” The success of the social democratic governments of Scandinavia are too obvious to ignore. In spite of expensive programs like free education and extraordinary benefits for workers, and the accompanying higher taxes, the standard of living and the quality of life in those countries is consistently the very best of all nations, and their economies are thriving. They consistently come up with intelligent, yet common sense solutions. For example, imperatives such as climate change and getting rid of waste are accomplished at once by generating electricity from garbage. Then there is the example of Norway’s heritage fund, with over a trillion dollars stashed away from oil revenues. Copying success is wise.

Canada is a great country, but it could do a lot better. If we are ever to take our place as a world leader, Canada needs to be smart, innovative and make better choices.