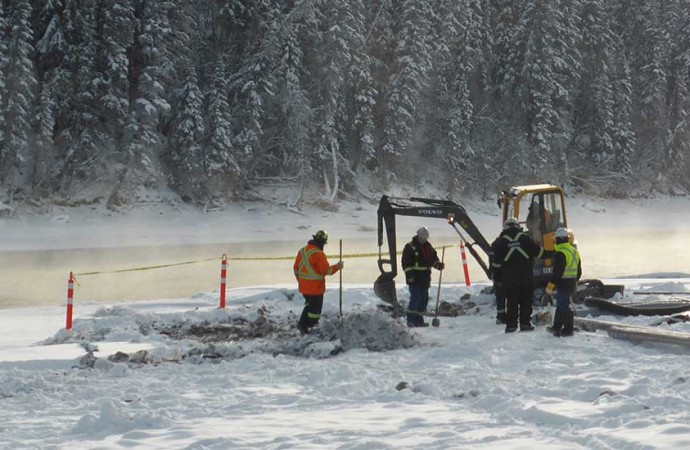 A crew works to remediate the damage done by a spill in 2013. File photo.

It’s been almost two years since contaminants from the Obed Mountain Coal Mine spilled from wastewater pond into the Athabasca River and now the companies responsible are facing consequences.

Six charges relating to the October 2013 incident have been laid against and Sherritt International Corporation, operating as Sherritt Coal, and its subsidiary Coal Valley Resources Inc. (CVRI), according to a release from Oct. 16.

Bruce Maclean, an environmental consultant managing community environmental monitoring programs for the Mikisew Cree and Athabasca Chipewyan First Nations said they are happy to see legal action being taken, but still have reservations over the transparency of the process.

“The process by which those violations were chosen is still being kept from us so they are still not releasing information,” he said. “They could have let (the companies) off so the communities are happy they are being charged but I think … nobody has really done a solid enough job on the environmental monitoring to convince people one way or another of the impacts.”

There are also many questions from the community about the impacts on their treaty and indigenous rights.

AER has stated that, to protect the integrity of the legal process, Investigation Summary Reports will not be posted to the its Compliance Dashboard until the enforcement is completed.

The leak took place about 30 km East of Hinton, Alta. and contaminated two tributaries of the Athabasca River with a slurry of water, minerals, flocculent (a thickener used during the production of coal) and unrecovered coal.

“The report the company put out seems to indicate that a post freshet sediment survey that was conducted in 2014 – that would have been their research – found that all the deposit materials had been resuspended during that freshet and likely carried down to Lake Athabasca,” Maclean said. “It reinforces that any of the sump material will likely have settled out into the delta and be of a concern there.”

He noted the immediate impact concerns were with the fish habitat and the potential for the waste to smother spawning beds as it permeated the ecosystem, contaminating it.

The first appearance for the charges is scheduled for Jan. 20, 2016. Charges laid: