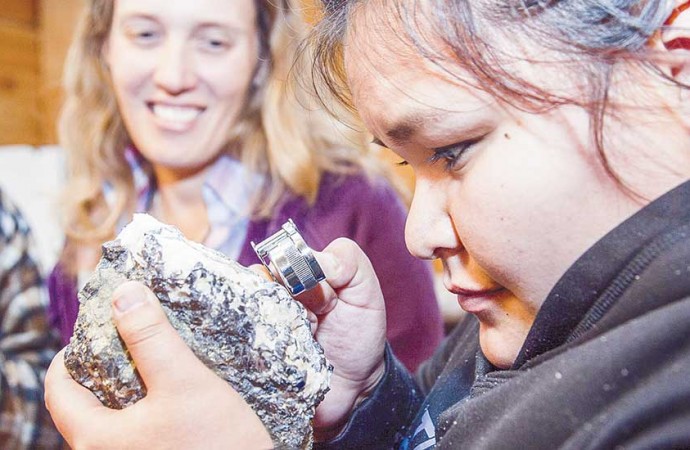 For years Danny Yakeleya and his brother talked about digging into a story their grandmother told of gold on the Mackenzie Mountain.

“These people spent their lives on the mountain,” Yakeleya said from his Tulita office. “My grandmother spent 60 years on the mountain and 20 in the community. So for one story to come out of 60 years, that’s not a lot. There must have been something to it.”

The former mayor of Tulita has some time on his hands since rolling the heavy equipment business he shares with his brother and a friend into two others and downsizing a bit, so next summer, he plans to follow the legend.

He was on the mountain last summer doing some prospecting when he realized the reading he had done and the YouTube videos he had watched left some big holes in his understanding of the craft, so he started looking around for courses offered in the Sahtu.

Like the vast majority of gold expeditions, he came up dry, so when the chance to take a course offered by the government of the Northwest Territories (GNWT) and a host of other mining sector stakeholders came up this fall, he jumped at the chance.

At just $40 it was money well spent as Yakeleya, one of 50 people who took part in the workshops in Yellowknife, Behchoko and Dettah, feels more prepared to do a proper job of it the next time he hits the land.

“This was a good stepping stone into actually doing prospecting,” he said. “It’s a lot of work, there is a lot of carrying equipment and walking and it can be dangerous. If you’re working (as a freelancer) for a company, they demand a lot. Don’t just expect a nice time.”

“You don’t want to go out and stake a piece of land and find out you did it wrong,” he said. “They taught us what laws and regulations to watch out for (including) the Mines and Minerals Act, and where to look for things if you’re not sure.”

The first day was all classroom work; day two was hands-on and spent out on the land.

“That was really great,” Yakeleya said. “They showed us what to look for in the rock formations, where minerals seep through, that sort of thing. (The course) set you on the path you should go. It pointed you in the right direction.”

Prospecting may not be for everyone. It is a lot of hard work and risky both financially and in terms of personal safety on the land; Yakeleya said even the rough-going depicted on the variety of reality shows focused on small-scale exploration and mining operations in the North has the glow of Hollywood about it.

So the prospecting courses may not lead to a grassroots goldrush in the NWT, but having that skill set could come in handy to the residents who already spend time on the land harvesting and trapping.

“I’d like to see a lot more people around the area doing stuff,” he said. “For people who are already out on the land hunting, if you had that knowledge maybe you’ll see things that spark your interest. It gives people the chance to broaden what they’re doing.”