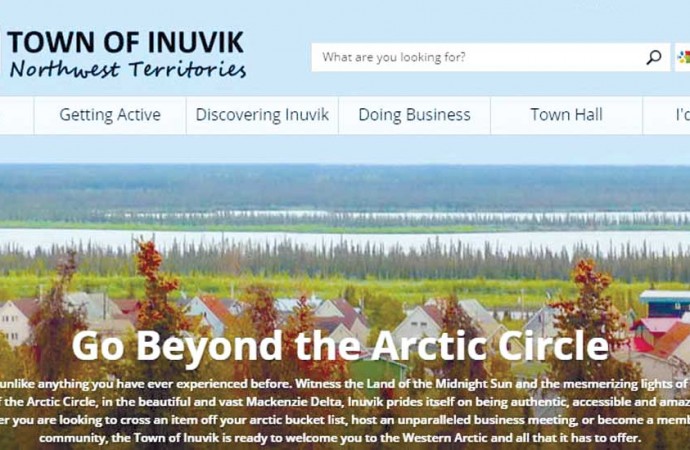 A screen capture of the Town of Inuvik’s new website, constructed by Waterloo company eSolutionsGroup.

Inuvik has followed in Yellowknife’s cyber-footsteps with a hip new online identity. The town’s administration decided to upgrade its antiquated, unattractive former website that was difficult to use for both visitors navigating it and administrators updating it, according to town SAO Grant Hood.

They used the same company that updated the City of Yellowknife’s website, Waterloo-based eSolutionsGroup, after hearing good things about the company’s product and perhaps more importantly, their customer support after the site goes live.

“They don’t go away once it’s built,” Hood said. “We’re very happy with the product. Internally, we are able to get information out much easier.”

Like the Dempster, the website’s destination is always the same – Inuvik – but like the cars that travel it, it has a number of options that can be upgraded/added in the future.

Out of the box, the website is flush with improvements over the old one: a news feed on the homepage that adheres to the trend in modern websites featuring carousels rotating through larger-than-life images depicting the town’s natural beauty, a community calendar, a town council calendar with minutes and agendas and online by-law complaint reporting.

Hood said the town is considering adding functions like e-commerce, allowing residents to pay bills and fines online and companies to bid on tenders, and for surveys.

“A lot of the social activity in Inuvik runs through Facebook pages such as Inuvik Buy and Sell or Inuvik Events, but I think it is important for the town to have a singular presence where community members can find relevant information quickly,” Giffin said.