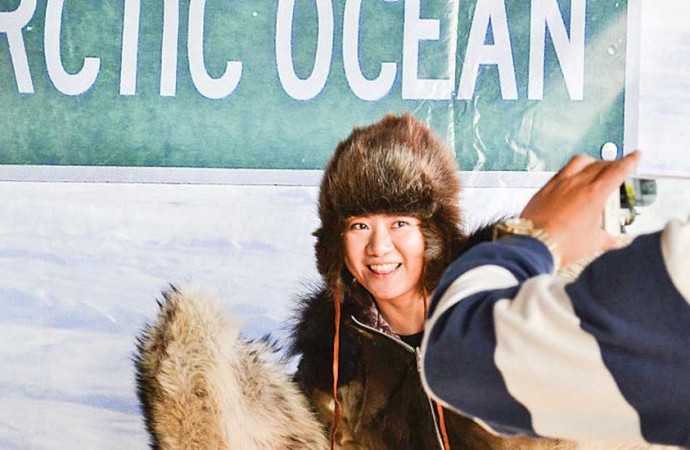 Chinese tourists pose with furs loaned from the Arctic Chalet Resort during a group trip up the Dempster Highway to Inuvik.Photo courtesy of Taylor Giffin.

Opportunities must be seized north of the Arctic Circle, especially by towns expecting flat growth for the near future.

The town of Inuvik has one in front of it and administrators are working to figure out how to capitalize on the surge of tourists who visited last summer.

“Tourism is a big thing here,” SAO Grant Hood said. “There definitely was a noticeable increase this year. It was also a big topic at the all-candidates’ meeting.”

Traffic on the Dempster has been steadily increasing but 2015 was a slightly unexpected bumper year for the town, according to marketing coordinator Taylor Giffin. There were signatures from people from all six continents in the town’s guestbook one week over the summer.

More recently, a tour bus of about 60 tourists including eight journalists/filmographers from China passed through Inuvik via the Dempster. The town welcomed them with local food and a tour of the highlights and finished with a photo shoot in front of the town logo with furs borrowed from the Arctic Chalet Resort. A return trip is in the works.

“Where Yellowknife has a stranglehold on the Japanese market, we’re always looking at the Asian market and China would be good (to tap into),” Giffin said.

Visitors have a good time while they are in town regardless of their origin, according to a weekly survey at the visitor’s centre. All of the tourists interviewed said they had a “very good time” during the average 4.75 days they spent in Inuvik, and that they would recommend the experience to others.

Giffin said most tourists were drawn to the town to experience local culture and northern life, to cross the Arctic Circle and to see the scenery and wildlife.
On Saturdays, they had the chance to shop local from growers and artisans at the Arctic Market, which finished its third summer in September. Led by volunteers, the market generated about $1,150 for the town and about $180 for each of the vendors on average per week selling locally grown, made, carved, sewn, cooked, baked or created items. There was a minimum of eight vendors selling on each of the 12 Saturdays in the market’s season.

Another growing attraction is the Dempster itself. Every year drivers take their cars, trucks and recreational vehicles up the road to the northernmost Canadian settlement accessible by road just for the trip according to Giffin, and two-wheeled tourism is picking up, too.

Adventure motorcycling starts with dual sport bikes suitable for both long-haul highway rides and rugged trail use, as Rush drummer Neil Peart put it when he described working up his nerve to tackle the Dempster, “designed with high clearance, long-travel suspension and stout wheels to handle heavy baggage and bad roads.”

A study on motorcycle tourism on the Dempster released by the GNWT and the Yukon government earlier this year found that like Peart, the people adventure riding the Dempster are almost entirely men 45-64 years of age, 40 per cent of them American and almost all of them riding BMWs. Half earned $120,000 per year or more and they tended to spend about $1,000 on supplies and accommodations on their trip.

They sought out travel destinations “based on outstanding scenery, wilderness and wildlife areas, and seek physical challenges while maintaining personal safety.”

“It’s apparent from the two phases of the study that the Dempster Highway represents a significant portion of the overall motorcycle trip, but it is not the only destination: other northern roads and even southern provinces are included in the trip itineraries,” the report states.

Kathy Lowe from Clayton, Ontario, had “an amazing experience” that was “beyond (her) wildest dreams” this year when she and her husband took their grandkids up the highway after 45 years of talking about it, according to a release prepared by Giffin.

“It’s almost like an adventure travel opportunity,” Giffin said. “It’s a growing trend that we’ve got to pay attention to.”

Now that the robust summer is gone, the town is preparing for the annual Inuvik Sunrise Festival and participation in the Muskrat Jamboree. Travel packages are in the process of being prepared and expectations are that “both of these events will, once again, be highly successful.”