The non-democratic election in the NWT 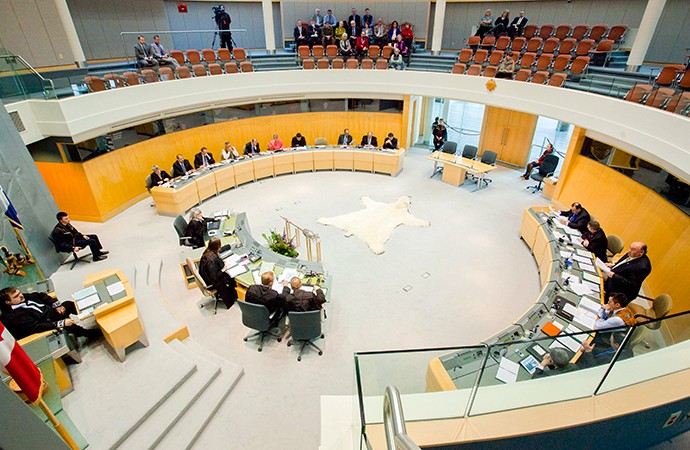 Energy, excitement, drama, joy for the winners and consternation, even angst for those who didn’t win, emotions at their peak - all that was encompassed in the recent federal election, a great experience, invigorating Canadian democracy. Unfortunately little if any of that will emanate from the territorial election when a new NWT government is chosen on Nov. 23.

Granted, not many elections in Canadian history reached a climax like this federal one did, thanks to the sense of urgency from a majority of Canadians to eject Stephen Harper, plus the charisma of Justin Trudeau as a successor. It will long be remembered.

The NWT is a smaller political arena and the stakes are not as high, but the main reason its election will be a staid affair is it will lack the cut and thrust of party politics. Missing in the leadup to election day in the NWT is that bubbling cauldron of ideas that so engaged Canadians in the federal election, forcing the politicians to become better, or lose. As parties strategically released their platforms and made promises, enthusiastic media pounced on each, analysing and challenging them, then voters got a chance to pass judgement. Polls came into play along with social media. Opinions swirled. Like an instant acid test, in some cases they were rejected and backtracked on, in others they proved popular and the parties ran with them, pushing them harder. It was a vital process, at once invigorating, demanding, judging and evolving. It would be good to capture aspects of that in the NWT’s territorial elections.

This is not a pitch for party politics. The NWT’s population is too small to field capable candidates in each riding from several different parties. Furthermore, as we have seen in the last 10 years in the federal Parliament, partisan wrangling created gridlock, the downside of party politics. The smart thing to do with the NWT election process is adapt the good, incorporating it as much as possible into consensus government.

In particular, a key component of democracy is missing in the selection of the NWT premier. The way the NWT process is structured there is nothing in advance, no requirement for premier candidates to present a platform for consideration and debate – by the people or even by MLAs who make the selection – no mechanism for choosing from alternatives to try to define a better path to the future.

Currently, the choice of premier by the 19 members is based on popularity and whatever lobbying and deal making that might go on behind closed doors. Nine or more votes are required to win, assuming the candidate votes for her/himself. Notably, the people are not involved. After a premier is selected, the winner and new premier picks an executive council or cabinet. The remaining ordinary members assume the role of opposition.

This time ‘round, to facilitate the transition to a new assembly, a Special Committee on Transition Matters was struck, comprised of six MLAs and several members of the civil service. Its role is to provide the new assembly a roadmap to move forward. It describes the circumstances and context of the last assembly and highlights what should be priorities for the new one, then presents that to the current assembly for consideration and ratification. The work of the committee essentially replaces any advance election process. Again, no role for the public and certainly no invigorating, challenging, idea-generating exercise is involved in the committee’s work.

The committee put forward its recommendations in early October and those were adapted and passed. Included is a new step-by-step program for how cabinet will formulate a platform for the new government. The new premier, after having selected the cabinet, will present the assembly with a draft plan from cabinet on what it intends to do in the coming term. Input is then received from ordinary member MLAs. Those ideas are considered and may be added to the final document. Following that, it is finalized by cabinet, then presented, for the record, as the government’s “mandate” for the coming term.

All that happens post-election. No creative, dynamic process, no cauldron, no bubbling. The ideas MLAs put forward may invoke debate, but that is all, and public engagement and participation is completely excluded.

It actually appears less like a government and more like a large corporation’s new chair and executive seeking input from the board of directors that they may or may not heed.

All of it is based on a loose concept of consensus government. The changes presented by the committee that were adapted by the assembly amount to an evolution of the governing process, essentially changes to the constitution, but then the NWT does not have a constitution. Maybe it is time that discussion was renewed.