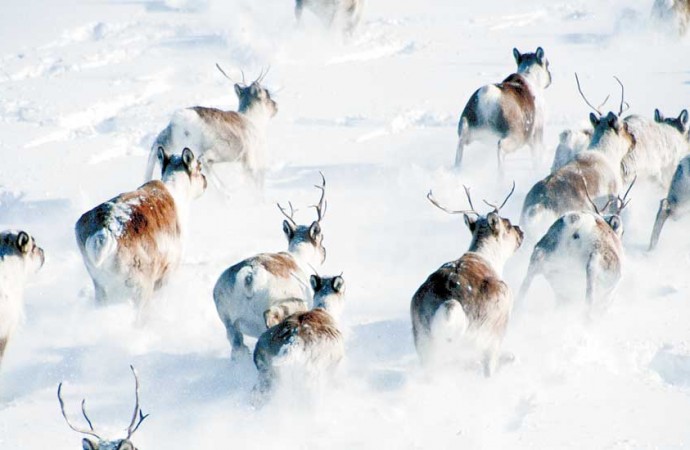 The number of caribou in the Bluenose East, pictured here, and the Bathurst herds are in serious decline, prompting the Tlicho Government to halt its harvest for the 2015-16 season.Photo courtesy of GNWT.

The Tlicho Government is doing its part to protect the Bathurst caribou herd by not harvesting during the 2015-16 season.

The indigenous government, a co-manager of the herd, made the call after reviewing summer surveys from the department of Environment and Natural Resources (ENR) that show a dip in the territory’s caribou population.

“The news is not good for both the Bluenose East and the Bathurst caribou, they are in decline,” Tlicho Grand Chief Eddie Erasmus said in an interview with the Journal. “The Tlicho Government and the government of the NWT, we had to address this hard situation.”

“This was a very hard decision to make by the Tlicho Government and it’s not taken lightly,” Erasmus said. “We are willing to halt our hunt on the Bathurst this year as well as willing to significantly reduce our hunt on the Bluenose East herd. We know this is a sacrifice to Tlicho but this has to happen to preserve the caribou for our children and future generations.”

Other Barrenground caribou herds throughout the territories have seen similar shrinkage.

ENR Minister Michael Miltenberger spoke with the Journal about the decision on Oct. 23, just days before the writ on the territorial election was dropped.

“As a government, they are to be commended for the position they’ve taken,” he said. “Doing the right thing is not often the easiest thing to do when you’re in government, but in this case, they’ve done the right thing. We’ve been working together for years on caribou.”

Other Aboriginal governments have agreed to take action to conserve the Bathurst caribou, Miltenberger said. The NWT Metis Nation indicated it would not harvest from the herd, while the North Slave Metis Alliance and the Yellowknives Dene First Nation have acknowledged the need to comply with and accept recommended ENR conservation measures.

“We’ve pretty well, in terms of the Bathurst, got most of the players engaged,” Miltenberger said, though he noted a key piece to the protection puzzle is still missing.

“Nunavut continues to allocate tags, not only allocating tags, but allocating tags for the commercial harvest so this has to be resolved,” he said. “There’s been chats at the premier level, at the ministerial level, at the deputy level, at the co-management level so it’s still an unresolved piece of business. It’s a herd that doesn’t recognize political boundaries, it goes through the NWT up into Nunavut where they calve.

“One of the issues on the Nunavut side of course is that they don’t harvest that herd directly, so for them it’s not as pressing an issue as it is for us. They harvest more the Bluenose East, which goes into the Kugluktuk area and then there’s the Beverly, Ahiak and Qamanirjuaq (herds).”

Deliberations between the two territories will likely continue into the 18th Legislative Assembly, Miltenberger said.

The Journal reached out to the Nunavut department of Environment for comment, but did not receive an answer before press deadline.