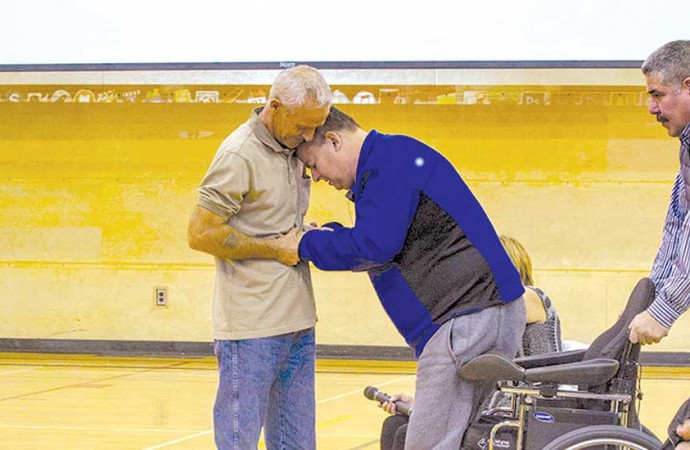 John Boden, who lost most of his mobility in a collision with a distracted teen driver in 2007, spoke to students in Yellowknife and Hay River last week.Photo courtesy of GNWT/James Mackenzie.

Eight years after a teenager texting while driving changed his life forever, John Boden may have found a new road.

At the end of October, for the first time since the collision with that 16 year-old left him an incomplete quadriplegic, Boden spoke to groups of students about the potential consequences of distracted driving.

The native of Camrose, Alta. said his message seemed to hit home.

“(The students) didn’t really admit to using a cellphone while they are in their car but every one of us got a sense that when we spoke they were focused on every word we said,” Boden said. “There were kids that almost looked like they had tears and were emotional about the situation.”

Boden made international headlines in August when he walked one of his three daughters down the aisle with the help of a walker. All three of his girls were teens when he was injured and the idea of giving them away under his own power inspired his intense thrice-weekly rehabilitation sessions.

“We worked very hard to make sure I could,” he said.

Though he can stand for short periods, he has no feeling below the point of his injury, requires around-the-clock care and, for example, needs someone else to wipe or scratch his nose. Speaking in Yellowknife and Hay River, Boden asked the students to put themselves in his position, imagining how their parents and siblings would have to cope with it.

He showed photos of his vehicle, which was totalled in the collision, and of himself in the hospital. His wife, Shauna, spoke about assisting him on the weekends.

“I spoke from the heart, I didn’t need to read anything,” Boden said. “I walked them through it, I was quite graphic. At the end I did a little demonstration of how I can stand. It shows them really how life changes (and) to show my personality, I’m outgoing and always very positive. I have a strong sense of humour and I use that in the presentation as well.”

In June 2014 the GNWT more than tripled the fine for distracted driving to $322 including a 15 per cent victim surcharge. The Motor Vehicles Act has outlawed using handheld devices including phones and GPS navigators since 2012; 458 people had been charged as of March 2014.

Boden plans to return possibly in June to speak in Inuvik and Norman Wells. He wants to put young people in the same position kids were a generation ago when they were asked to police their parents into buckling up.

“Can you tell mom or dad ‘can you please put your phone down until we go that extra four or five minutes,’” Boden said. “Years ago you used to have the kids saying ‘mom and dad, put your seatbelts on.’ They were the driving force (then) and the cellphones are no different.”