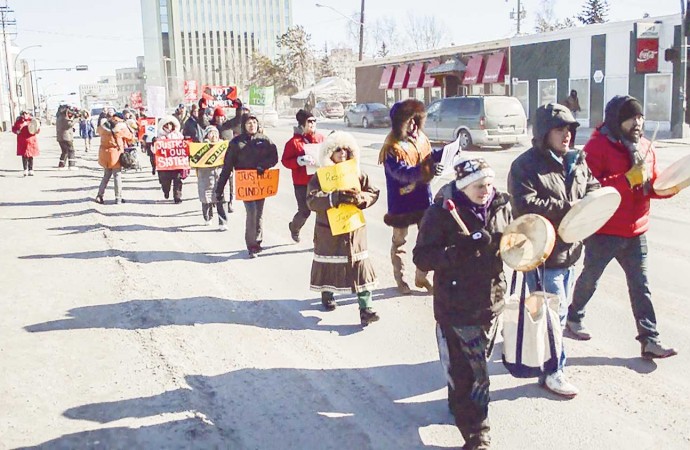 Yellowknifers take to the street in a march for missing and murdered women. Could the same thing happen, but for men? Photo: Casey Koyczan

For years, advocates have been calling for an inquiry into cases of missing and murdered indigenous women, a call that was answered last week when Indigenous and Northern Affairs Minister Carolyn Bennett announced the department was initiating consultations with families of victims - the first step in the inquiry process.

Many advocates took the move as a victory, though many questions remain about the scope of the inquiry, which the government has dedicated $40 million towards so far.

One of those questions rings loudly: will incidents of missing and murdered Indigenous men be examined as well?

In an interview with the CBC, Bennett did not rule out the possibility.

An inquiry for men and women

A growing number of advocates have been pushing for a gender-inclusive inquiry into missing and murdered indigenous people.

In an Apr. 27 column published by the National Post, University of British Columbia-Okanagan political science professor and genocide expert Dr. Adam Jones added his voice to the mix.

“According to Statistics Canada data compiled by my research assistant Penny Handley, approximately 2,500 aboriginal people were murdered in Canada between 1982 and 2011, out of 15,000 murders in Canada overall,” he wrote. “Of the 2,500 murdered aboriginal Canadians, fully 71 per cent — 1,750 — were male, and 745 were female (and one was ‘of unknown gender’). A further 105 aboriginal women were listed as ‘missing for at least 30 days’ as of 2013, ‘in cases where the reason for their disappearance was deemed ‘unknown’ or ‘foul play suspected’, according to a Toronto Star report).”

An RCMP report released in May of this year differs slightly, with data indicating 1,017 aboriginal women have been murdered since 1980.

At this time, there is no similar RCMP report dedicated to Indigenous men and no plans are in place to create one in the near future.

“We continue to focus our efforts on preventing violence against Aboriginal women to reduce the incidence of homicides and disappearances within this vulnerable population,” a national RCMP spokesperson told the Journal.

Taking matters into their own hands

Jen Mt. Pleasant, a masters student at Wilfrid Laurier University who hails from Six Nations, Ontario, is focusing her major research project on analyzing data she has collected on missing and murdered indigenous men.

Over the last two-and-a-half years, Mt. Pleasant has compiled information from statistics and media coverage, creating a database of MMIM.

“Within the first month I had about 300 names,” she said. “Those names came from mostly publically accessible, online police databases and the RCMP, and then I relied mostly on news articles.”

Now, she has about 750 names in her database, though she said she has more to add; her education has left her with limited time to dedicate to the project. Eventually, she intends to publish her database online. Mt. Pleasant said she would like to eventually see a holistic inquiry, to address the systemic nature of violence often perpetrated against Indigenous families as a whole.

“With women, a lot of cases remain unsolved,” she said. “For the men it’s different – usually it’s somebody that is known to him, a lot of times it’s gang-related.”

She also pointed to a pattern of police-perpetrated violence against indigenous men, highlighting the “Starlight Tours” of Saskatoon, where police were caught driving men out of the city and abandoning them there.

Without organizations like the Native Women’s Association of Canada – the national group that has so feverently dedicated itself to the cause of missing and murdered Indigenous women – Mt. Pleasant said it might not be realistic to have men included in an inquiry right away.

“It took literally 30 years to get missing and murdered women into the spotlight, it’s only been in the last three years or so that it’s been covered so heavily in the media,” she said. “It took decades of grassroots people and family members from all over Canada advocating for this and so, I can’t expect my research to just hop in the spotlight. It’s going to take time.”

In an attempt to speed up that process, Jones launched a petition calling for a gender-inclusive inquiry in mid-November.

“It seems to me that we have to opportunity, potentially, to stage an intervention that would encourage some measure of reframing, both the campaign for an inquiry, and the broader discussion of violence against aboriginal women and men, girls and boys across the country,” Jones said.

As of Nov. 23, about 80 supporters had signed the online petition.

“Murdered and missing aboriginal women and girls, I think that has to be front-and-centre in any broader initiative,” he said. “I have an image in my mind of something that I’ve called a First Nation’s Anti-Violence Initiative, which would be aimed at getting to grips with systemic issues of very long standing and of a very highly destructive nature that I think need to be discussed alongside any discussion of violent victimization of aboriginal communities.”

These include, but aren’t limited to, the “structural violence and the legacy of Canada’s dispossession of Native peoples, domestic and partner violence, child abuse (including in the residential school system), suicide, homelessness, and addiction issues.”

Mt. Pleasant said she was weary of the petition – due to its timing and the fact it was initiated by someone who does not identify as indigenous – but ultimately, she agreed that its intentions were good.

“If you want to look at the whole issue of violence then you have to really look at it from and indigenous peoples’ perspective and not just specifically indigenous women, because a lot of men are included in being victimized as well.”