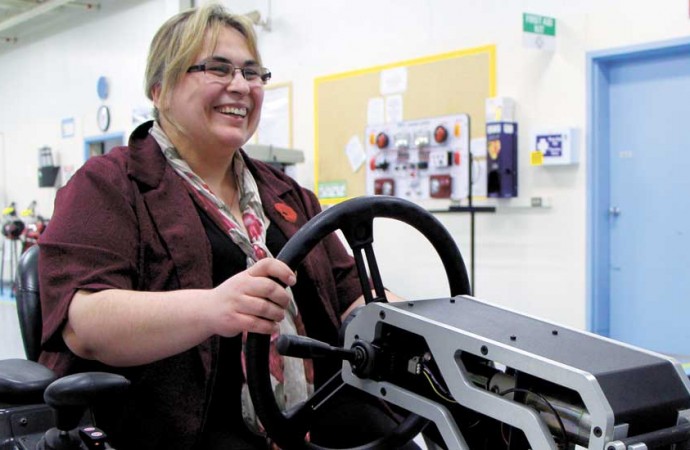 Fort Smith mayor and member of the Aurora College Board of Governors, Lynn Napier-Buckley, tries her hand at driving a virtual dump truck on a simulator in the heavy equipment operator/technician lab.Photo: Craig Gilbert.

Aurora College threw open the doors last week, part of a continued effort to attract students flying over its Thebacha campus in Fort Smith to train in the trades elsewhere.

Thebacha campus Apprenticeship program head Duane MacDonald led the college’s board of governors on a tour prior to a regular meeting held in conjunction with an open house Nov. 4.

MacDonald started teaching in the plumbing program in 2008 and was promoted to program head in 2012. He toured the governors and guests, including Mayor Lynn Napier-Buckley and Councillor Erika Bell, through the observer-communicator, plumbing, heavy equipment operator and technician, carpentry and welding shops.

MacDonald said instructors spend time between the school’s three eight-week deliveries each year staying current with changes to best practices and regulations in their respective trades and updating the curriculum to reflect them.

“It’s constantly evolving,” MacDonald said. “Technology has to be incorporated into the curriculum. Our instructors teach full days, from eight in the morning until four o’clock …up to 11 courses (each) depending on the program for eight weeks straight.”

He said a more detailed tour would have revealed “a lot more yellow,” referring to the distinctive paint job on Caterpillar equipment, millions of dollars’ worth including a new excavator, dump trucks, graders and bulldozers.

The college has 26 heavy vehicles in all to provide campus-based training for enrolled students as well as members of the community.

“When you compare the amount of seat time they get in even the shortest program we offer, it’s more than what they get in other areas of the country,” MacDonald said.

Donated or discounted equipment is everywhere. In the plumbing shop, $5,000 worth of heating controls provided by manufacturer Taco lets students run pieces of equipment through their paces the same way they would in the field.

The open house is part of a broader effort to improve enrolment in trades programs.

“For us, apprenticeship numbers have been going down in the last few years and yet the number of apprentices in the territories is pretty steady,” MacDonald explained. “So it doesn’t take a scientist to figure out students are flying over us. I wish there was a way we could fill these seats because we’re sometimes running with half a class or less or we’re cancelling classes. That’s hard because you end up having to scramble to keep your staff busy.”

One carpentry delivery in the fall was cancelled for that reason.

The team also has a series of videos in the works, created to give those potential students in remote communities an up-close look at Aurora’s trades facilities.

“I would love to have more people from the community come through here,” MacDonald said. “I want to do another open house at the same time as the town’s trade show in the spring, (and) even coordinate shuttles (from the arena to the campus).”

A substitute teacher by day, Bell was so impressed with MacDonald’s tour she is thinking about trying out a trade.

“I love how they stress safety and sanitation and it is evident in each room we visited,” she said. “We were informed that the electrician instructor installed a few solar panels that the students study throughout the year and I found this quite interesting. I discovered that the majority of the trades instructors are from Fort Smith and are also Aurora College alumni. It is great that they hire local Northern workers.”