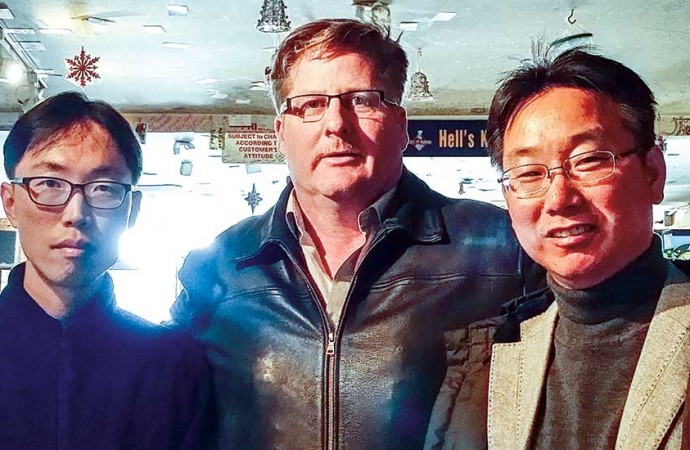 The flagship biomass project that has been orbiting Enterprise finally has a place to land.

The four-year mission to find a place to produce as much as 120,000 tonnes of wood pellets per year will “finally” reach a significant milestone on Nov. 27, when the Hamlet of Enterprise plans to formally sign over 320 hectares of land to Aurora Wood Pellets Ltd. (AWP).

The hamlet and the company came to an agreement on the sale in late October.

“It’s a big move for Enterprise,” Mayor John Leskiw II said. “We finally got all the ifs, ands and buts and wiggle stuff worked out. I’m looking forward to finally getting this done.”

The property being sold to the company was Commissioner’s land transferred by the Northwest Territories and didn’t become the property of the hamlet until September.

“I’m really pleased at the progress we’ve made in two or three months,” Leskiw said, adding he is already focused on finalizing another land transfer for residential development. “If people wanted to work at the wood pellet plant and wanted to live out here, there would be very little land available. My next big push is to get some residential land going, then commercial land.”

Leskiw said the transfer is in progress but the hamlet hasn’t received title to the property. It is an important detail for a community of about 120 people.

Brad Mapes, mayor of Hay River and president of AWP, has estimated the plant could employ between 50 and 70 people on-site and dozens more on the road and, seasonally, in the bush. Construction is set for next summer with production starting in mid-2017.

Mapes told the Journal he believes as many as 85 per cent of the workforce will come from Hay River, but Enterprise is preparing for a population surge.

“I’ve lived in Enterprise for 10 years,” Leskiw said. “When my son and I moved up here we were the 94th and 95th people in town and now we’re up to about 120. If we get 20 people who move here, that’s 15-16 per cent growth. The time it takes to build the pellet plant should allow us time to finalize everything and prepare for the increase in population.”

Managing growth is a “different problem” for the hamlet’s mayor and council to have, one that may influence their search for a new senior administrative officer. Enterprise is just one of a number of Northwest Territories communities looking for an SAO. They include Hay River, which needs to fill the SAO, director of finance and director of public works positions in its own administration.

“It’s totally new to us and it is a major learning process but we’re managing to muddle through it with help from Dillon and anybody else who will talk to us,” Leskiw said. “We should be able to get through it. Over the years we’ve never had an official process for hiring an SAO. We’re using this hiring time to develop and formalize the process. Previously it was almost like picking a name out of a hat. We didn’t know what we were looking for and what the expectations of them were. Based on the fact that we’ve got all the land transfers (going on) someone with purchase of land experience, economic development, with the new world we’re entering, would be a major benefit.”

With the annual election of half of the six seats on council and his own coming in December, Leskiw is not sure whether he will be mayor at Christmas, let alone when the pellet mill fires up. Mapes, on the other hand, received a four-year mandate on Oct. 19. He said the project has little or no chance of creating a conflict of interest for him at the Hay River council table.

“(The agreement) was a huge step for us,” he said on Nov. 12. “We still have a few things to work out with our harvest communities on our fibre agreements and legacy agreements (but) we’re going to have a public signing in the next couple of weeks and move on to the next steps.”

Those steps include site preparation for construction of the mill, located on the rail line and near the centre of AWP’s harvest area.

The mill would provide a use for wood burned in the record wildfire seasons of the past two summers. Burned wood becomes uneconomical to harvest after three or four years as the surrounding foliage grows back in. Live trees will also be harvested, initially in Fort Simpson and Fort Providence.

Wood will come from Fort Resolution Deninu Kue First Nation and the Fort Providence Métis Council, which have signed 25-year fibre management agreements (FMAs) with the territorial government and will receive a per cubic-metre royalty for trees removed.

Mapes hopes other communities, including Hay River and Jean Marie River, will come on board as well; the level of production and physical size of the mill, which has room to expand, will depend on how much wood is coming in.

The plan is to use experienced harvesters at first, then to hire and train locals.

“It will be around a 120,000 tonne per-year operation depending on how we tie the harvest agreements together,” Mapes said.

Each harvest community will have the final say on how much wood will be taken and from where but there is no question the harvesting practices will be sustainable.

“It’s a great boost to the community.”

Mapes said AWP has the full support of the former GNWT premier and cabinet. The government’s 2012-2015 Biomass Energy Strategy shows residents still rely on non-renewable resources including diesel and natural gas for 89 per cent of space heating demand; with just five and six per cent of demand filled by cordwood and wood pellets respectively.

The same data, sourced from 2010-11, indicate biomass heating systems offset the equivalent of 16 per cent of the GNWT’s heating fuel consumption, or 2.4 million litres of oil, avoiding the release of 6,500 tonnes of greenhouse gas emissions each year.

The GNWT also promotes the use of biomass systems like wood pellet stoves by individual residents and larger boilers and furnace systems with its Energy Efficiency Incentive and Alternative Energy Technology rebate programs.

“Biomass is part of our plan to cut the cost of living and cut our greenhouse gases,” he said. “The price of oil drove people to pellets, and the second stage (of the plan) is to build an industry.”

The land transfer was one of the last pieces of a process Miltenberger said Mapes has been patient in working through.

“He has invested a lot of his own money, he has his customers lined up (including a 10-year agreement to supply the GNWT),” Miltenberger said. “This is a really important piece for us, that creates employment in two small communities and hopefully Jean Marie River soon. (Mapes) could buy logs from Alberta if the supply runs out but he has stayed committed to the North and he deserves credit for that.”