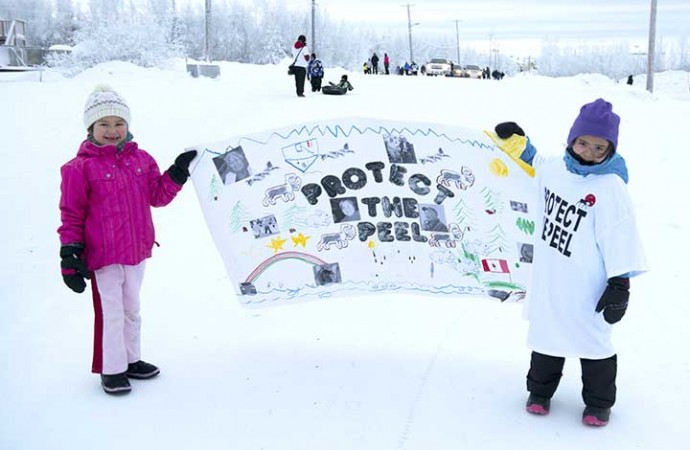 Cynthia Tetlichi and Jaslyn Charlie at a rally in Fort MacPherson in January 2014.Photo courtesy of Mary Walden.

In what could be a case of one step forward, two steps back, Aboriginal governments and environmental groups celebrated a partial victory last week at the Yukon Court of Appeal.

A three-judge panel, Chief Justice Robert Bauman, Madam Justice Lynn Smith and Justice Richard Goepel agreed with a trial judge’s ruling that the Yukon government failed to meet its obligation to consult on a land use plan that could have opened up more than 70 per cent of one of Canada’s most pristine and significant ecosystems to development.

Less welcome news was their decision that the process should be returned to the point at which the Yukon government breached the land-use planning provisions of the Umbrella Final Agreement (UFA) with First Nations.

They found this took place back in February 2011, when the government proposed modifications to the Commissioner’s Recommended Plan.

Gill Cracknell, executive director of the Yukon chapter of the Canadian Parks and Wildlife Society (CPAWS), said they are already working on next steps after a Nov. 3 decision sent the plan back to the drawing board.

Setting the process so far back effectively wiped out an “enormous” amount of time and taxpayer money already expended, which has CPAWS balancing optimism with caution.

“Sending it back to that time sets the question of the whole way the government will do this process,” Cracknell said. “The public deserves better than a do-over. We wanted the process sent back to the point where they had to consult correctly. The government consulted on their own ideas instead of the plan produced by the commission.”

A “pleased” Gwich’in Tribal Council (GTC) welcomed news that the appeal court agreed the Yukon government failed to honour the letter and spirit of its treaty obligations related to the Peel Watershed Land Use Plan, but echoed CPAWS’ concern.

The bulk of the Peel watershed sits in traditional Tetlit Gwich’in lands and the GTC was granted intervenor status in the lawsuit filed by the Tr’ondek Hwech’in and Na-Cho Nyak Dun First Nations, along with CPAWS Yukon and the Yukon Conservation Society with Thomas Berger as their legal counsel, in May. Representatives and legal counsel from the GTC were given the opportunity to speak to the plan at the appeal hearing in late August.

“We are disappointed that the court has ordered the process to be returned to a much earlier stage than requested, disregarding four years of negotiated bilateral work,” GTC President James Wilson said in a written statement. “We share the concerns of the lead proponents… that this decision may open the door to the Yukon government to be able to implement their original plan.”

The GTC is worried the “long-fought concessions” realized under Section 11.6.2 would be lost.

Chief Roger Kyikavichik of the Vuntut Gwitchin wants to see the Peel Land Use Plan through to completion, according to a statement.

“This is not finished until we’ve concluded a final land use plan that we can all agree to,” he said. “We must ensure the integrity of this pristine ecosystem is protected for all time. Let’s be clear: we are not against development, but it must be done in an environmentally sensitive way. The water, land, environment and the animals have to be protected for our children.”

Berger said the judgement represented a major step in guaranteeing that land use planning in the Peel and elsewhere in Yukon proceeds according to the process laid down in the UFA.

“However… We must consider the question of whether sending the matter back to an earlier stage in the process may allow Yukon government to effectively implement the Government of Yukon’s plan, a plan which the court has held is a nullity, by the back door.”