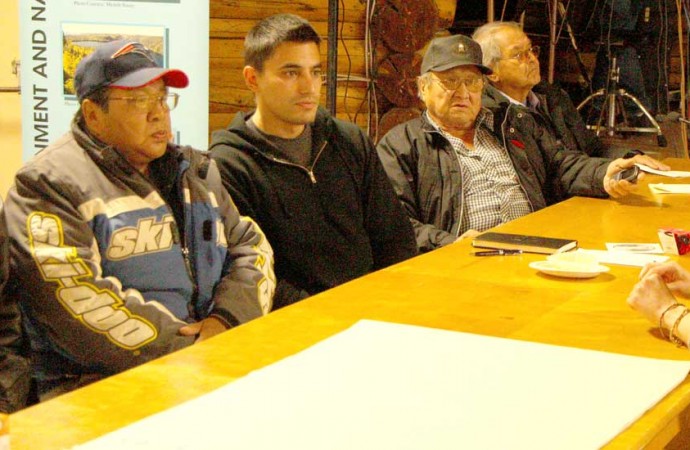 Wolves and caribou and moose, oh my! A mix of wildlife managers, scientists and the public came together in Fort Smith last week for the biannual South Slave Regional Wildlife Workshop, hosted by the local office of Environment and Natural Resources (ENR).

Over the course of three days, the group discussed ongoing initiatives to track and protect a wide range of animals, with special attention to those that are harvested.

“We certainly (heard a lot) about predators, that was a big thing actually,” said wildlife biologist Ashley McLaren. “The low water levels on the Slave River got a lot of attention because that was a big thing this summer. People were seeing the low levels on the river right here in town even, so a lot of people brought this up as being a concern for aquatic furbearers.”

The first will be a genetic study of the boreal caribou that move within the South Slave region, to measure the relatedness of the animals, starting this winter.

“We manage our programs by administrative boundaries so this genetic project may find a different way that we can manage these based on how related groups are and get at some of those lineages and, as well, look at how…any habitat disturbance may impact their movement,” McLaren said. “I think I brought up the example about a river or a road. If you’re having individuals on one side that are genetically different than the other, well then that landscape feature – whether it’s human-made or natural, that’s creating a barrier to them.”

Two new studies on wolves have also been prepared. The first is a study of the wolf diet, conducted through necropsies of animal carcasses. Wolf samples have already been collected, though tissue from other animals still needs to be sourced to act as comparative tissue.

The second study will examine the movement of wolves within the study range of the boreal caribou the Hay River lowlands. Pending approval from regional Indigenous groups, scientists will use five GPS tracking devices, as well as aerial surveys, to keep tabs on the wolf population in the area.

“The more wolves there are in the area, the more pressure there is on the harvest species of the bison, moose and caribou,” Cox said. “You hear sometimes that there are more wolves on the land, but it’s hard to say.”
According to McLaren, no similar wolf studies have been conducted in the region previously.

“It will be good to have that baseline data for future studies,” she said.

Hearing concerns from the public

As with the 2013 meeting, ENR staffers worked diligently to ensure the public’s needs were heard.

“We like to have these discussions and collect information from the public, because it can actually help us prioritize our future studies,” Mclaren said, noting that the 2013 meeting led to an increase in moose, bison and predator studies.

The meetings are also a welcome effort to increase communications between ENR and those who live off the land.

“This is a great opportunity,” said Stanley Beck, a long time harvester and representative from Deninu Kue First Nation in Fort Resolution. “It’s great to be able to take this information back to my community. I only wish we could hear from them more often.”

A follow-up report documenting proceedings and scientific findings is expected to be compiled and prepared for distribution by the end of this year.