The first 100 days: back to school for new MLAs 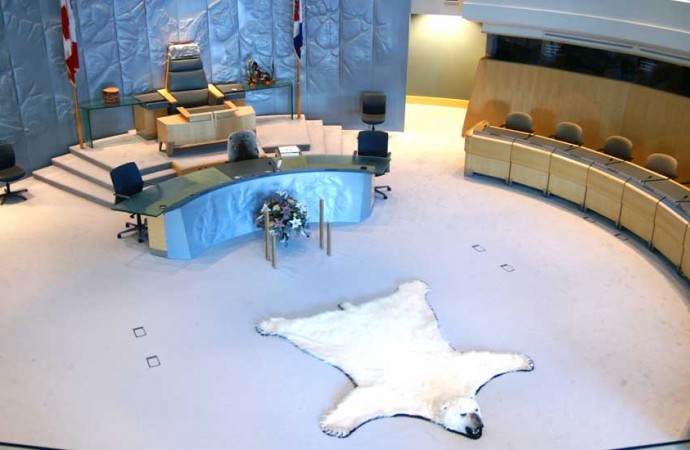 Finally, election season in the Northwest Territories is over. No more municipal, territorial or federal votes to count - aside from several cases where a recount is needed.

The ballot boxes have been stored away for another four years, candidates have packed up their buttons and signs, and Facebook pages calling for votes have been converted into permanent means of communication with the members-elect.

In a Ledge Talk speaker series event at the Legislative Assembly (LA) on Nov. 25, members of the GNWT held a presentation on Consensus Government in Transition: The Next 100 Days, explaining how the new government will hit the ground running.

Tim Mercer, LA clerk since 2003, and David Brock, recently appointed as the deputy secretary to the Cabinet, Priorities and Planning, shared their experience with past transitions while outlining the upcoming agenda.

“When the 17th Assembly established a special committee (of MLAs) on government transition, one of the things that came out of that committee process was the need to communicate more frequently and more effectively with the public about how consensus government works,” Mercer said. “In a party-based system like we’ve just seen at the federal Parliament, the parties articulate their priorities and their platforms before the election so when people go to vote, they’re voting on what was committed to before the election. In our system, that agreed-upon platform and priorities are set after the election so it’s important to hit the ground running because there’s a lot to get done right up front, even in terms of agreeing or priorities, let alone starting to implement them.”

Brock described this as an “inverted process.”

Months ahead of the election, a special committee on transition matters – made up of MLAs and government staff – created a document called Passing The Mace, intended to help guide the new and returning members as they settle into their roles.

“That report will very much serve as one of the sources of information to brief members of the legislative assembly and facilitate them in thinking about what they think should be the priorities for the 18th Assembly,” Brock said. “This will be the first time that there has been some advice from the previous assembly for the next on both how priorities should be set as well as, perhaps, what those priorities might be. Again, it’s entirely up to members of the 18th both in terms of process as well as the substance.”

For those who couldn’t attend the Yellowknife event, the Northern Journal has a guide to what the newly-elected MLAs will be up to over the next three months.

The document outlining the transition process proposes a series of milestones that the 18th assembly should hit and the dates they should be completed by, however, all dates are subject to change as they are ultimately set by the incoming government.

Dec. 4: The 18th Legislative Assembly has its first meeting as a full group

Dec. 8: Members are formally sworn in

Dec. 14: A public roundtable is held on the floor of the Legislative Assembly, to be televised and recorded on Hansard. Here, members will begin to articulate their priorities in the upcoming term.

Dec. 16: The territorial leadership committee, unique meeting of all duly elected MLAs, will select the premier, cabinet and speaker. These appointments will be finalized on Dec. 17. At this time, members will start working on business of the house. Standing committees and regular members will be briefed on their duties, as will cabinet.

Jan. 2016: As recommended in Passing the Mace, cabinet will come forward to the caucus – all regular members – with a mandate, a detailed plan of action for the 18th Assembly. Once agreed upon, the mandate will form the basis of what is essentially a speech from the throne that will be delivered when the house convenes again in mid-February. This will set the final stage for the first budget session in the spring.

“I certainly have a steep learning curve but I am doing lots of reading, talking to people and look forward to the challenge,” said MLA-elect Kevin O’Reilly, representing the Frame Lake riding. He was the only member of the 18th Assembly to attend the presentation.

Throughout his campaign, one of O’Reilly’s priorities was to make the GNWT’s operations more transparent, a goal he believes the new transition period helps to achieve.

“That process has been proposed to replace the way that it was done in the past where all of the MLAs would go away for a retreat for a little while and come back with some usually very high-level sets of priorities and objectives and so on,” he said. “I think this will probably give us something more concrete and measurable and allow for the public to also assess progress that’s been made on a mandate. I think that’s a very interesting approach and I like it.”