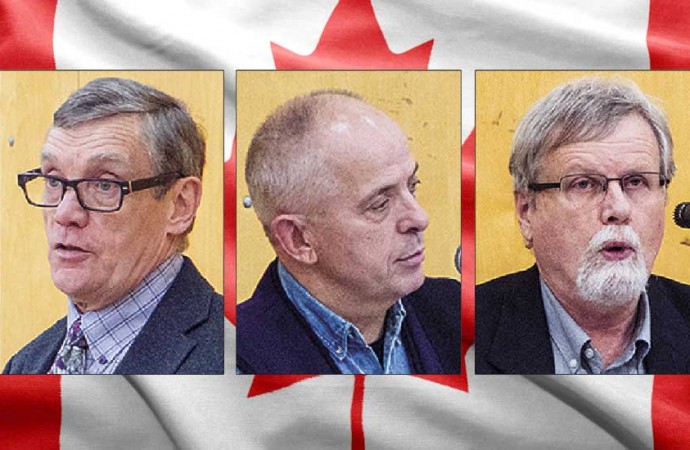 The Thebacha riding may be drawing attention for its “battle of the sexegenarians,” but the candidates certainly addressed issues impacting all age groups at a forum held at the high school in Fort Smith on Nov. 12.

From a lack of daycare available to young families in the community, to low enrolment rates at Aurora College, to the implementation of better services for the aging population, candidates Michael Miltenberger, Lou Sebert and Don Jaque tackled a wide-spread range of issues over the two-hour debate.

Editor’s note: Don Jaque is the owner and publisher of this newspaper and its precursor, the Slave River Journal.

Jaque has operated as a journalist and small business owner within Fort Smith for the last four decades, during which time he has investigated and editorialized about issues impacting not just his home community, but the North in general.

In his platform, Jaque prioritizes the economic development and diversification of Fort Smith. He promoted establishing daycare centres, improving Aboriginal Head Start programming and consulting with the community regarding junior kindergarten, providing child care solutions to young families already in the town, and to encourage enrolment at Aurora College for those young families coming from outside regions. He expressed a strong desire to fill classrooms once again, bringing more business to Smith.

Jaque repeatedly said he wanted to repair a “fragmented community,” and bring people together to address the issues impacting them, like the potential slide zone on the river’s edge of town.

When asked about helping seniors live in their own homes and communities, Jaque recalled Smith’s history as an excellent retirement community and noted that in order to retain that title, he said the local organizations would need to keep up with technology and best practices.

He advocated for the need to “hunker down” fiscally, given an incoming climate of economic shrinkage forecasted for the entire territory. To weather the potential storm, Jaque said he would strive to improved business relations with Hay River, while advocating for access to excess energy from the Taltson dam.

“Let’s fix this stupid thing where NUL, Northland Utilities, which provides the power to Hay River and Yellowknife, buys the power from the Northwest Territories who is the wholesaler but they’re also the retailer,” Jaque said. “I mean, it’s just a mess and we need to fix it.”

Lou Sebert is the owner and proprietor of his own law practice, in addition to teaching a number of different subjects at Aurora College for the last 30 years. He has held a spot on Fort Smith’s town council for the last 14 years, acting as the deputy mayor for the last three.

Referencing a multitude of recent studies as he presented his positions, Sebert called for a more open and transparent government system. He pointed to a pamphlet from his run for MLA 24 years ago, when he originally called for the establishment of an ombudsman’s office at the legislature, an issue that remains a priority for him today.

“I’ve been going around town, giving out my platform but I’ve been listening to the voters also and there are certainly current concerns, the first of those really is government,” he said. “We live in a town where the government is an overwhelming presence, both as an employer and a contractor. I suggest a more transparent and open government is required.”

Ever the academic, Sebert called for Aurora College to strengthen and diversify its programming. He addressed rumours about the possibility of establishing a northern university and claimed that, given its history as the “education capital” of the NWT, Fort Smith should be the host of any future post-secondary facility.

“The best universities in the world are not built in (centres of financial and political power),” he implied, listing Harvard, Cambridge and Oxford as examples.
Sebert said he would support the expansion of seniors’ assistance programming, as well as financial incentives like grants for home upkeep and tax reliefs, in order to help seniors age in-place.

He also addressed addictions treatments in the NWT, calling for a treatment centre in the North. Given the availability of resources located in Smith, he advocated for a centre to be opened in the town, if possible.

A career politician following previous experience as a journeyman carpenter and GNWT bureaucrat, incumbent MLA Michael Miltenberger has been in the legislature for the last 20 years, 14 of which he has sat in cabinet as a health, finance and environment minister. Previous to that, he also held roles on the municipal level, as a town mayor and councillor.

“Now it’s time to focus on building the NWT, which should be and will be a hopeful and exciting time,” he said, praising the 17th Assembly for its accomplishments. “There are many challenges, opportunities, locally, territorially and nationally. When it comes to consensus government, where there’s no parties and picking the MLA is key, experience counts.”

With front-row seats to the economic realities of the NWT as the minister of finance, Miltenberger was highly supportive of developing projects to cut down on the cost of living, by creating conditions for economic development.

He touted his role signing transboundary water management agreements with Alberta and British Columbia, noting that new agreements that give the territory input on the development of new projects and the protection of water resources were on the way.

While he agreed with his colleague that Aurora College could use a boost to fill classrooms and entice students, he said he is “loathe to look at” the resources, including the bricks and mortar, needed to create a university in the NWT. Instead, he advocated for more online resources and for more support for Dechinta, the territory’s on-the-land university.

On the other end of the population demographics, Miltenberger said he liked what he saw in terms of support for seniors in the community, stating that Fort Smith should “continue doing what we’ve been doing,” and ensure existing programs and supports stay in place.

Fort Smith has an “enormous opportunity to be a bedroom community,” Miltenberger said, however, he identified a need for more investment in housing. He also called for dedicated funds to facilitate “high-end tourism.”

When asked about his priorities for the community, Miltenberger put a strong focus on health, noting that by cutting out smoking, drinking and eating badly and getting moving, the population could work together to eliminate health care costs and spend those dollars elsewhere.