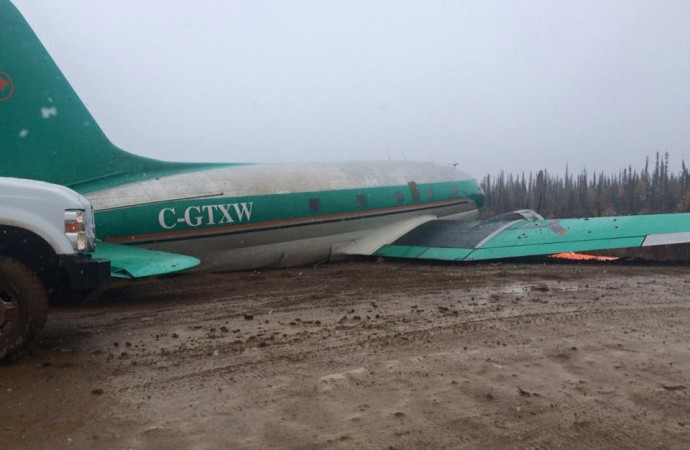 Buffalo Airways, the “Ice Pilots of NWT” have been cancelled in real life after Transport Canada suspended the airline’s operator certificate Nov. 30.

The Yellowknife aviation company, which flies mainly Second World War-era planes, gained international notoriety as the subject of the History Channel reality show broadcast in 60 countries including Canada, the United States and the United Kingdom, but it has a “poor safety record” according to Transport Canada. The company is prohibited from providing commercial air services but said Wednesday afternoon it intended to “continue to support” passenger and freight customers with charter aircraft.

“Transport Canada does not hesitate to take safety action,” a statement from the board read. “Transport Canada took this serious action in the interest of public safety because of Buffalo Airways’ poor safety record. The department will not allow Buffalo Airways to resume its commercial air service until it proves it can keep its operations consistently compliant with aviation safety regulations.”

Most recently, a Buffalo DC-3 was involved in a hard landing near Deline in September. No injuries were reported. Transport Canada investigated two other incidents involving Buffalo Airways months apart in 2013. In August of that year, a Buffalo DC-3 built in 1942 made a crash landing at the Yellowknife airport 30 seconds after takeoff when an engine burst into flames. The plane had three crew members and 21 passengers on board and struck a stand of trees and left a trail of wreckage 330 feet long before stopping. Again, no one was hurt.

In December 2013, a vintage Buffalo C-46 aircraft caught fire at the same airport while taxiing down the runway.

In its report on the August 2013 incident, Transport Canada (TC) described tense relations with the company over a period of years, claiming that in 2011 the company questioned the competence and motivation of inspectors in “repeated diatribes against Transport Canada.”

It said that prior to 2010 “the audit and inspection cycle for Buffalo Airways … was a cycle of repeated inspection findings during which inspections would identify unsafe conditions, the company would take action to address them and, sometime later, the conditions would recur.”

The company’s response to deficiencies identified during TC surveillance activities demonstrated an “adversarial relationship between the company and the regulator.”

“The company refuted the regulatory basis of findings, questioned the competence of TC inspectors, and initially did not take responsibility for the issues identified. The overall picture that emerged from this investigation is of an organization that met the basic requirements of regulations and then only when pushed by the regulator.”

Transport Canada said it liaised with Buffalo Airways throughout the period leading up to the Nov. 30 suspension and will continue working with the company in the interest of public safety.

Hay River Mayor Brad Mapes said the grounding is a “huge issue” for his community.

“Buffalo is a key transportation link for our town,” he said Wednesday. “Personally Buffalo has always made me feel safe flying with them and I’m hoping that Transport Canada can get the needed assurances from Buffalo to resume service.”

The Dene Nation also expressed concern on its Facebook page about the loss of freight service to Northern communities.

“We now wonder how freight service will be going north since our winter roads are not open yet and Christmas is just around the corner?”

The company, described in the official Ice Pilots NWT Twitter account bio as “the most unconventional airline in the Canadian North,” did not respond to a Journal request for comment, but posted a brief statement on its Facebook page: “Buffalo Airways will continue to support all of our customers travel and freight needs though chartered aircraft until such time Buffalo Airways has resolved this issue with Transport Canada.”

The company said it had been able to “support” passenger flights between Hay River and Yellowknife and that Deline, Tulita and Norman Wells had received groceries and holiday supplies from chartered aircraft.

“Buffalo Airways will continue to meet our customers needs, by any means necessary. We are overwhelmed by the amount of support we have received both nationally and internationally.”

“I would fly with (owner) Joe (McBryan) anytime of the day,” she posted. “His daughter is the nicest ticket agent I’ve ever met in my 40 years of flying on my own. If I were to go down in a plane I’d sooner go down in a Buffalo plane. Buffalo Joe, you got a family of friends behind you.”

Sue Long sent support all the way from England.