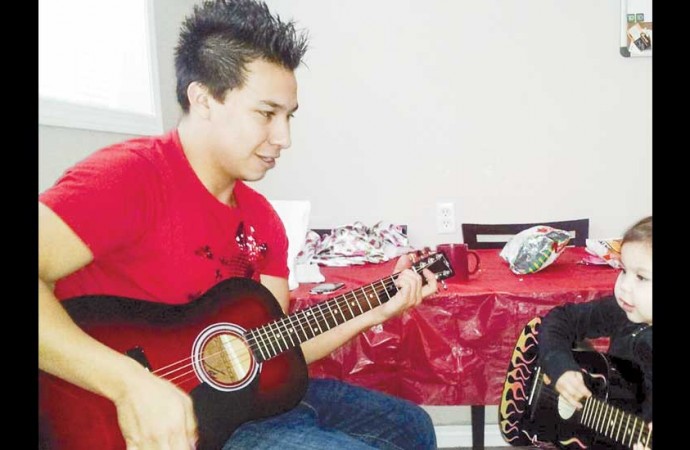 Walter Bourke Jr. with his daughter, Emalee, 5. Walter and a friend were found dead of an apparent drug overdose in Edmonton on Dec. 5.Photo courtesy of Jeannie Bourke

Walter Bourke Sr. returns to an empty house each morning in the last few days before Christmas.

For years the carpenter has had his son, Walter Bourke Jr., at his side as a helper and for the past few months, Walter Jr.’s friend as well.

“His friend broke up with his girlfriend and had nowhere to stay,” Bourke said. “He had one kid. Walter asked if he could stay with us and work. I’m still working at the same house. They’re not there.”

Walter Jr., 23, and his friend were found dead of a suspected drug overdose in an Edmonton apartment on December 5. Edmonton police have thus far declared the deaths non-criminal, and would not release any information beyond confirming officers attended the scene.

Neither of the young man’s parents, Walter Sr. or Jeannie, know for certain what killed him. They suspect the two friends either took fentanyl (a powerful painkiller) knowingly or took what they thought was ecstasy, a common party drug, that unknown to them was laced with fentanyl. Since fentanyl is so potent, tiny amounts – just a few grains too much – can be fatal.

Originally from Fort Smith, the Bourkes said they were told compete toxicology results will take two months. Worried others could be hurt, Walter has been trying to piece together what happened in the hours between the last time he saw Walter and his friend that Friday night and when they were discovered lifeless. He has been working with the police and asking around to those who might know.

He said the boys planned to start the weekend the way they usually did, at the apartment of a mutual friend.

“That night they said they wanted to go someplace, so I gave them a little bit of money,” he explained. “They left about 11 p.m. From there Walter Jr. ran into his cousin on the street about a block from home. The cousin asked him to come along, but he said ‘no, I’m going to (my friend’s) place.’ Somewhere after (that friend) must have picked them up.”

Walter Sr. said at the apartment the boys met their friend’s roommate’s best friend who offered them a free hit of ecstasy, half of a pill each. Walter and his buddy split one pill, but another friend apparently took one-and-a-half pills, yet somehow survived. This baffles the two grieving parents.

“They took it at 1 a.m.,” Walter Sr. said. “From there they started falling asleep. Walter laid down in the bedroom and (his friend) laid down on the couch. That’s how they were found.”

Walter Sr. is not satisfied that his son’s death is being classified as non-criminal. He wants the culprit who had the pills to be dealt with – taken off the streets before someone else gets hurt.

“They should go pick him up. He was bragging he has 1,000 more pills,” Walter Sr. alleges. “I want to see if they caught the guy. He’s gonna do more damage if they don’t catch him right away.”

Walter went to the hospital to visit and the friend looked afraid to see him.

“He didn’t even come to the funeral. He won’t answer his phone.”

He described his son as a kind young man with a powerful sense of humour.

“He never had no trouble with the cops, they had no prints on him or anything. That’s why they couldn’t identify him. The other one they identified right away.”

Jeannie said the funeral was packed with her son’s friends.

“There was a lot of people,” she said. “He knew a lot of people. He was a good kid. He had a lot of friends. He was very nice to everybody, respectful to people. If he seen someone and they asked him, he would take the shirt or the jacket off his back if they needed it. He tried to help out any way he can.”

Like Walter Sr., Jeannie is curious about the relationship between the boys.

“I don’t know if he suffered, or did it just kill him right away? I just don’t know and that’s what really hurts the most.”

Walter Jr. is survived by a five year-old daughter, Emalee. Orders creating a Fentanyl Response Team and distributing the antidote naxalone to first responders were issued by the Alberta health minister on Dec. 11, the same day he was laid to rest.

Used primarily for post-surgical patients and those suffering from chronic pain, including seniors in end-of-life care, fentanyl is a powerful synthetic opiate analgesic. It can be 100 times more potent than morphine and 20 times more powerful than OxyContin.

The drug has been killing many young people and its deadly effects are on the rise. There were 213 overdose deaths in Alberta in which fentanyl was detected from Jan. 1 to Sept. 30 of this year, up from 120 in all of 2014 and six in 2011. This is the most drastic increase in any Canadian jurisdiction, with more than 20 times as many deaths in 2015 as in 2011, according to the Canadian Centre for Substance Abuse (CCSA). Last week, the Wildrose Opposition released a 10-point fentanyl response plan that claimed the number of deaths could be higher because the province can not record the statistics accurately.

The CCSA found that nationwide, fentanyl was involved in the deaths of at least 655 people between 2009 and 2014, warning that estimate is also probably low. It said there were four fentanyl-related deaths in the NWT over the same period, three accidental and one with an undetermined cause. Fentanyl toxicity was the primary cause of death in two of the cases; one in combination with cocaine. The cause of death in the other two cases was multiple drug toxicity; one in combination with ethanol toxicity.

When mixed with heroin or cocaine it amplifies their effects, which include euphoria, drowsiness/respiratory depression and arrest, nausea, confusion, sedation, coma and addiction.

The substance is appearing in pure form and also as an additive to many street drugs, laced in heroin, cocaine and marijuana to name a few. In either case, there is no process control over how potent the home-brewed product is.

Jurisdictions across the country including Alberta and the Northwest Territories are rolling out strategies to respond to the rapid increase in overdoses and deaths caused by the drug. Within days of Walter Bourke Jr.’s death in Edmonton, the Alberta government had expanded the distribution of instant overdose antidote naxalone to first responders. It can revive a non-responsive patient experiencing an opioid overdose but triggers withdrawal sickness that can last up to two hours instantly.

Immediate actions in Alberta’s response plan include distributing thousands of take-home naxalone kits in First Nation and Métis communities, targeting the drug trade with law enforcement agencies and using orders issued by the health minister to expand the scope of practice for registered nurses, paramedics, emergency medical technicians (EMTs) and emergency medical responders (EMRs) to allow them to administer, prescribe or distribute naxalone.